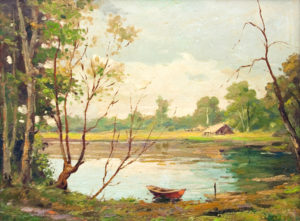 TWO LOVES AND A RIVER ©

and his friend Miss Mayme Bull

Scene 8   A half hour later, the Bull family home

[Paul Sawyier enters, stops and looks around the audience, casually walks to downstage center-right. Spotlight stays on him.  Smiling, he speaks in a mild, personable voice.]

[For 20-30 seconds he casually says hello to nearby audience members;  asks 2 or 3 their names;   casual, smiling, he gradually moves across stage, shakes hands with one or two (if physical layout permits).  He steps back and straightens up, resumes speaking to entire audience…]

Welcome, everyone.  I feel very honored that this many people have come out to hear about my art.  Thank you…thank you sincerely.     [pause as if collecting thoughts]

I hope you won’t be disappointed that so much of what will be told here seems to focus on my personal life.  My life — and my foibles — are really not what I’d like you to focus on, or take home in your thoughts when you leave here.

As lives go, mine was really quite ordinary…

…But no doubt some of the things you’ve heard about me are simply not true.

But no, my art is what’s important.  I guess I’d have to say that for just about my whole life, the one thing that mattered most to me was to paint the things I saw…  like my beautiful old Kentucky River, with its wooded hillsides…  its magical high palisades…

…and dear old Elkhorn and Benson Creeks, flowing along so placid…just begging to carry my canoe along, with me in it…  [melancholy]  …and maybe Mary, sometimes…

…the special soft light I saw in the streets of Frankfort – that sweet old town – with its fine old buildings and nice comfortable houses, and big lovely old trees everywhere, with their leaves just glowing and blending together like yellow lace on a quiet afternoon in autumn…   And the people…the good people of Frankfort, moving about through all this, going about their business, their forms fitting so nicely into the scenes I saw…

And I just had to paint them, to try to capture the way I saw them, on paper and canvas.

[pause…begins slowly pacing about the stage as he speaks]

I cannot remember a time – clear back to my early childhood – when I didn’t love just looking at the things around me, and wanting to draw them, and color them.

I’ll tell you something.  I think we never stop growing.  Not through our entire lives.  That surely is how I feel about myself. If you see something in a new way, a way that you never saw it before – whether it’s a river, a street…or a person – then you have grown.

I know there never was a time when I wasn’t trying out something new in my techniques – new combinations of watercolors, and pastels, and oils…you know, the things they say run in an artist’s veins instead of blood.

And we all grow in other ways too.  Everybody – artist or not. We learn how to make friends…and how to keep them.  I always felt I was pretty rich with good friends.

We learn how to earn a living – at least most of us do – seems like I never got very good at that.  I certainly never felt very rich with cash income.  And we learn to love…  …we learn to love…  …I’m not sure whether I feel rich or… or what… in that department…

Well, you can be the judge of how rich I got in all departments, because that’s why we’re here – to discover a thing or two about my art, to perhaps get the barest feel for how fine life used to be lived in dear old Frankfort… during those golden years between the Civil War and the Great War…     …What a dreadful pair of reference points, but that’s the span of my life, like it or not, Paul…

I suppose you’ll discover a truth or two about my life, whether I like it or not.  At least you’ll get a chance to set the record straight.  And there are a few things I would like to set straight.

Just for example, I can’t imagine how many times you’ve probably heard someone say, “Well, that Paul Sawyier, he was always drunk. He’d paint you a painting any time, anywhere, in return for a couple of bucks to go buy a bottle.”  Have you ever heard something like that?  Have you?  Anyone?   [hand raised, as if inviting audience response]

What an insult! What miniscule understanding of the truth such a remark conveys!

Then there’s the story about a man who went up to Frankfort cemetery to visit Mary’s grave, and asked where to find it.  “Sure,” he was told – “Mary Thomas Bull. She was Paul Sawyier’s girl friend,you know”…he was told.  Girl friend. Girl friend!  My Mary! [angry]    To call her just my “girl friend!”  Oh, what the truth was!… but no one knows…  No one will ever know the whole truth.

Well, you can judge for yourself what’s true and what’s not.  If we must talk about my life, I can tell you there were four stages.  The first was just growing up – call it “growth and discovery.”  Fourteen beautiful years, starting at age 5 – when we left Table Rock Farm up in Ohio, and came to Frankfort, where we moved into my grandmother Wingate’s house on Broadway – up until age 19, when things began to get rolling.  When you live on Broadway you’re in the heart of town.  You see what’s going on every day.

My second stage was the next seven years.  Ages 19 to twenty-six.  I call these my “young artist” years.  They were magic with artistic discovery!  Those were the years when I studied under artistic masters  …Thomas Noble, William Merritt Chase, Frank Duveneck…   I was learning – really learning – how to draw, how to mix colors, learning about light, and shadow, and perspective…portraiture…and so much more.  It was a time rich with learning, and I loved it!

Speaking of love…  It was early in those years that I found Mary.  Or re-found her, I should say.  It was 1887.  We both were just twenty-two years old.  …Ah, that was so very long ago…

I grew into manhood – matured, as best I could, as we all must.  That’s when my third stage took off.  I call it “painting Kentucky,” and it lasted twenty-two years all together.  Seventeen years in Frankfort… then five years on the river… after I left my Frankfort…

They were pretty good years…for the most part. You’ll see why when we get there, in just a little while.

Then I left my Kentucky.  What a mistake… But I didn’t care… at the time…  I wanted to be somewhere else.  Anywhere else.  My fourth stage.  Four years of loose ends.  I call those years “impressions of life.”  There’s really not much I want to say about them.

So, I guess we begin.  We’ll skip the growth and discovery years.  Just growing up is more or less the same for most people, I think.  Let’s go straight to where the action begins, in Phase two – “the young artist.”  That’s when I truly started to taste life, and that’s where I’d like you to begin sharing the true story.  What really happened.

In 1886 I was 21 years old, living at my aunt’s home in Covington.  I’d gone up there in the fall of ‘84 for my first formal art study, at the Cincinnati Academy of Art.  I took Professor Noble’s “life” class – sketching figures and painting portraits.  Ah, it was so good.  Aunt Sarah McKee and her daughter Jeannie, were so supportive.  Jeanie was more than a favorite cousin — she was my dear friend and constant companion, and she liked art.

A lot of my friends were artists.  Avery Sharp, for example.  After we finished our studies at the Academy, Avery and I put them to good use.  We opened our own business – a portrait studio in downtown Cincinnati.  Our friends often gathered there…

[Spotlight fades from Paul as light(s) comes up on Scene One.]