Just inside the entrance to Dancing Meadow Wilderness Farm lies this labyrinth: 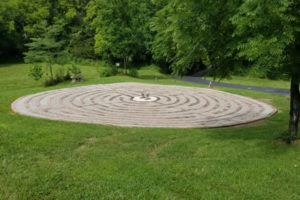 How The Labyrinth Got There

The Jules W. Delambre Memorial Labyrinth was rebuilt during the summer of 2018 by moving it from its original location, two hundred yards away at the far end of the Dancing Meadow, where it had been originally constructed nine years earlier. Fifty feet in diameter, the original construction consisted of paving bricks laid directly on grass by a two-person team consisting of grandpa and grandson. On June 5, 2010 following a dance on the green, the labyrinth was dedicated with public ceremony to the memory of our dear friend and colleague Jules (1941-2007).

A few feet away, on a high bank above the ripples of Mink Run Creek, stand two tall slender walnut trees with a large string art Celtic cross suspended between them. After I built and secured the five-foot-tall frame between the trees, Jules stood on the tailgate of my truck and used three colors of heavy-duty baling twine to string the cross. Now weathering with age, the cross shall remain where it is until it disintegrates from moisture and old age.

The original labyrinth was designed to be maintained by pushing a lawnmower around the grassy circles. Keeping grass controlled by mowing proved infeasible in the long run, as the bricks slowly settled into the earth and the lush grass rose up and over them. The grass, we said, is slowly but surely eating the labyrinth.

Moving the labyrinth to its new location was a labor of love by four spiritual friends bearing the names of Don Coffey, Sylvia Sousa Coffey, Charlie Pearl and Angela Mitchell. Working on cool mornings till rising summer heat drove us away, the bricks were individually extricated—one ring at a time—from their grassy entrenchment, cleaned of attached dirt by hand, hauled up the dancing meadow, and re-laid at the new location in rings with hundreds of careful measurements from a steel pike at the center.

The surface was prepared by hitching a hundred-year-old four-gang horse-drawn disc behind a John Deere tractor and pulling it many dozens of times around a fifty-five-foot circle until the ground was de-grassed and rendered less unlevel than it had been. After removing an army of rocks turned out by the disk, a heavy weed-inhibiting ground cloth was laid down and topped by a second anti-grass cloth. Atop these the brick rings were laid from the center out. The final touch was snow-white quartz gravel in the center ring, surrounded by light gray pea gravel in all others. Bricking and graveling each ring was a substantial work project in itself.

A group of friends joined the original four for the final laying of gravel in the outermost ring. The Jules W. Delambre Memorial Labyrinth is owned by all of these…and by all the many others who will drive out here to walk the labyrinth over many years to come.

The following words appear on a small sign near the entrance to the labyrinth. Following them is a dedicatory poem In the Spirit’s Labyrinth.

This is a holy place.  Please respect it.

To the memory of Jules William Delambre – Anthropologist, Peace Corpsman, Man of Good Will, Friend

SPIRITUAL PURPOSE     We are not human beings on a spiritual path, we are spiritual beings on a human path. Concentrating on the labyrinth’s pathway beneath our feet helps focus and quiet the mind, putting us more closely in touch with our own spirituality. The labyrinth is a church without walls … a sacred ground, a spiritual place upon the Earth.  Walk the labyrinth to silence the noise and babble in your own mind.  Relinquishing for a few moments your persistent sense of time and location, enter into a state of timelessness in quiet-minded meditation or prayer.

THREE STAGES TO WALKING THE LABYRINTH           1) From entrance to center shed the details of everyday life. Walk slowly, focus on the path directly before you.  Open your mind, be accepting of all thoughts and emotions that may surface. 2) During your time spent in the center feel illuminated. Quietly pray or meditate, receiving whatever understanding, wisdom and spiritual guidance may come to you. 3) From center back to the entrance feel a new sense of self, touched by spiritual feelings gained in the labyrinth.  Feel oneness with the world, prepare to re-enter your normal life routine spiritually renewed and refreshed. With your last step from the labyrinth, go forth with dual purpose and intent 1) to help others, and 2) to attain knowledge …understanding …wisdom.

HISTORY of the LABYRINTH

Ancient-   The oldest known labyrinths, dating back four to five thousand years, include classical seven-circuit circles such as the Cretan, the Celtic, and the Hopi medicine wheel. The famous Labyrinth of Greek mythology, an elaborate structure built by the legendary Daedalus for King Minos of Crete, was designed to hold the Minotaur, a creature half man and half bull that the Athenian hero Theseus slew aided by Ariadne and her spool of thread.  Western labyrinth patterns also are similar in conception to the timeless mandalas of South Asia—physical representations of the spiritual realm designed to aid meditative contemplation.

Medieval-   Adopted by early Christianity, labyrinths were very popular in medieval Europe.  Twenty-two of the eighty Gothic cathedrals housed labyrinths.  Chartres Cathedral, located an hour south of Paris and dating to the twelfth century, houses what is probably the world’s best-known labyrinth and the most elaborate pattern. The Jules W. Delambre Memorial Labyrinth uses the pattern of the famous eleven-circuit labyrinth on the floor of Chartres Cathedral. During the Middle Ages European labyrinths were traditionally used as pilgrimage sites. At Church urging, many European Christians took a vow to visit the Holy City of Jerusalem at some point during their lives.  However, as the Crusades made travel to Palestine unsafe, other means were needed to honor that vow, and so the Roman Church adopted labyrinths in order to offer people an alternative way of fulfilling their commitment. Christians could then make their pilgrimages to cathedral cities such as Chartres, Rheims or Amiens and complete their physical and spiritual journeys by walking the cathedral labyrinths.

Modern-  Contemporary Americans and Europeans are rediscovering the labyrinth as a spiritual tool.  Churches of many denominations across the nation have built labyrinths on their grounds, and spiritual centers are creating them for people on retreat.  Many communities are constructing labyrinths in their local parks.  Hospitals are building permanent labyrinths for patients and staff, and cancer support groups use them for strength and finding one’s way through difficult times. Patients at hypertension clinics walk them to reduce stress. Many people walk labyrinths simply for a much needed time-out during busy stress filled workdays.

The terms labyrinth and maze, frequently confused in the English language, do not address the same thing.   MAZES are simply games that challenge our logical minds by offering many choices of paths. They contain cul-de-sacs and dead ends, and may have more than one entrance and more than one exit. Trick corners and blind alleys are common features of mazes. They present riddles to be solved, and are designed to make one lose one’s way.  LABYRINTHS have the exact opposite purpose – they are designed to help us find our way. Through the peaceful flow of their pattern—one unambiguous, well defined path that leads from the outer edge into the center and back out again—labyrinths help us ground ourselves in the sacred. Through the act of trusting the path, of giving up conscious control of how things should go and being receptive to our inner state in private meditation, we can open ourselves to new experiences of spiritual growth.

IN THE SPIRIT’S LABYRINTH

Walking full around the circle, as in primal sacred dance,

All uplifting of the spirit, sacred ground, the labyrinth;

Single path to be discovered, contemplation in each step,

Quieting the mental noises, silence in the labyrinth.

Silent is the inner self all focused in the labyrinth;

Every step progressing further to the quiet of the mind,

To the rising of the spirit, walking in the labyrinth.

Timeless spirit in the atoms of each pebble in the path,

Sacred place for growth in seeking, Understanding in the round,

In the silent sacred circle of the spirit‘s labyrinth.

for their generous assistance in moving and rebuilding

One thought on “The Labyrinth at Dancing Meadow Farm”