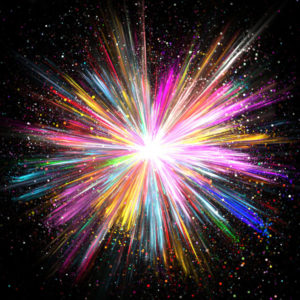 In this super-compressed extremely brief summary of the beginnings of our universe, we have now progressed from the instant of the big bang to a point some millions—possibly a few hundred millions—of years later. Experts differ. Never mind that the concept of “years” wouldn’t exist until invented nearly fourteen billion years later by an unusual life species resident on a remote planet they named “Earth,” we must have a comprehensible way to express “time” in these early times or this would all make no sense at all.

Following the universe-birthing events described above, “large-scale structures” began to form. This phase is really interesting, as it leads directly into that little matter about things “self-organizing” as they evolve and emerge, and the small question of how they could possibly do that. It also leads more or less directly to the existence of “us,” and what could possibly be more interesting?

But first, there’s a couple more points to make before we leave this “big bang” behind. Did such an odd thing really happen? Just from out of “nothing”—an infinitely small theoretical point called a “singularity”—comes this all-time-colossal explosion in which the entire vast universe “emerges” out of absolutely nothing! Really, now. Do you find that believable? Is it indeed any more believable than the Genesis or Big Turtle versions? How can we possibly imagine or think, much less know, that such a preposterous idea has any truth at all behind it?

Condensing and self organizing

From here on things get increasingly interesting—at least if you aren’t all caught up in the blather they call news these days. In an earlier chapter we have seen that evidence for the reality of a big bang has been found in several convincingly credible forms, including such odd stuff as fluctuations in the density of background radiation. These modern scientific findings tell us—by inverse reasoning—that such fluctuations were already there, in the original fireball, when the universe was much smaller and much denser. With such reasoning, it is not difficult to imagine how those originally small density fluctuations became larger, and enabled the universe’s far flung matter to organize itself.

Self organizing is a fundamentally important aspect of evolutionary processes in the broadest sense. It applies equally to the first (physical universe) phase of “long” evolution and, as will be discussed in the next chapter, to the second (biological life) “fast” phase. During the first phase, self organizing is thought to have worked roughly as follows.

Like those big circular exploding fireworks at the county fair, the vast clouds of debris flying outward in all directions from the big bang’s central dot did not spread quite uniformly. Why the process was not uniform we do not know, but of how it became non-uniform we think we know a little. Some areas “just were” slightly more dense than the average density of the whole, science will tell you, and you really have no choice but to believe because their version makes sense. Other areas, of course, “just were” less dense.

Little perturbations of unknown origin or cause occurred between, and rippled across, these areas of slightly differing densities. An area of space with even minutely greater density of gaseous stuff than its neighbor would therefore have a slightly higher gravity than the neighbor, thereby inviting a perturbation to ripple across from one to the other. In the spreading universe, things were beginning to spread unevenly. We may think of this as the original imbalance of nature that still shows up as different insects and tree nuts being abundant every year. These perturbations built up over the millions of years.

Under such very slight differences in gravity’s tenuous pull, the hot clouds of gas gradually separated. Slightly higher gravity in slightly higher-density areas slowly pulled all matter in that area in toward “a center,” thereby increasing both density and gravity’s pull as the cloud shrank in size, condensed, grew more dense. The more density and gravity grew, the faster they grew. The opposite happened in surrounding areas that had lower density and hence lower gravity. Over time, much of the matter in that big area was gradually drawn from the low-density spaces into adjacent higher-density aggregations. After several ages, low-density “near-empty” spaces lay as gaps between higher density clouds. All this took quite many human lifetimes, but not much as universe time goes.

Large-scale structures and their contents

Recap. Looking at the earliest phases of the universe’s birth and evolution, we have considered the big bang itself;  the quantum particles, light photons, atoms and two light elements the bang produced;  the rapid expansion that the bang set in motion;  and the condensing “pulling together” effect gravity had on clumps of matter, even while the universe as a whole continued expanding. The stage thus was set for structures, assisted by gravity, to self-organize and form themselves in the early universe.

Before the first stars or galaxies were born, the universe was a non-uniform sea of atoms and miscellaneous particles constituting huge, irregular clouds of “gas and dust.” Within these, there evolved clouds-within-clouds that would each condense and form into a galaxy … galaxies condensing and forming within each cluster of galaxies … clusters condensing and forming within each supercluster… all while universal space continued expanding. With these things happening all at once (“all at once” is a controversial detail), smaller clumps of cooling matter inside the galaxies were condensing, pulling in more gaseous stuff, to become the first stars. Most amazingly, all these structures self organized out of true chaos, forming themselves in response to gravity’s irresistible pull.

Almost, one could say, as if a master planner had designed gravity to guide the process—rather, one might say, like a Godly Algorithm. Such a God, having invented such an algorithm long before the bang that launched it, wouldn’t have to do anything but sit back and watch in satisfaction as the algorithm took care of things—guiding it all with “parameters”—if this, then that—the way algorithms do. Algorithms:  those popular self-learning, guiding, builders and overseers of bank accounts, lightening fast stock trades, self-driving vehicles—and universes.

The role of gravity is of central importance to the story. In the tug of war between gravity and universal expansion, gravity always won—at least locally. As each condensing region and sub-region gradually ran out of further matter to pull in, almost-empty spaces between local regions grew wider. Since gravity’s attractive force diminishes with increasing distance, further collapse due to density was possible only on ever-decreasing scales, thus millions of proto-stars-to-be came into being inside the embryonic galaxies.

By around 300 million years after the big bang, what had begun as irregular fluctuations, formed in the  primeval slurry of energetic particles, had so separated things that infant stars were everywhere forming within the new galaxies, and there was low-density space between everything and everything else. All the while temperatures across the universe had continued falling—by now averaging a mere few thousand degrees. Almost nothing. Cosmologist Joseph Silk has written a beautiful description of the whole process, homing in on the origin of our home galaxy. I paraphrase his delightful words for sake of brevity:

Imagine a region of space in the early universe that will someday become the Milky Way galaxy. It contains all the mass that will be in the Milky Way, but it is thousand of times larger than the future Milky Way-to-be. This vast cloud being fairly “new,” it has not yet condensed out of the surrounding clouds. But its density is not completely uniform with those surrounding clouds—by chance, it happens to be a small fraction of a percent more dense than the surrounding clouds. In the grand scheme of things, it is a “density fluctuation.” Density fluctuations can grow in strength as the slightest excess of gravity attracts surrounding matter. And so, atom by atom and molecule by molecule, the small overdensity becomes larger.

Even infinitesimally small fluctuations can grow exponentially, causing the cloud to break up into clumps, thus allowing gravity to more seriously proceed in its work. Still expanding along with the universe’s expansion, under gravity’s pull it nevertheless expands at a fractionally slower rate and, over time, lags farther and farther behind. It eventually becomes dominated by its self- generated internal gravity, and grows cooler, its outward pressure slowly succumbing as it is pulled ever inward to a greater density. It took a long, long time for slightly more dense regions of the universe to overcome universal expansion sufficient to become self-gravitating clouds but, almost from the very beginning, such clouds were destined to form the first galaxies. They would continue forming for the next ten billion years.

Wheels within wheels within wheels—though, less poetically, galaxy clusters tend to be irregular more often than round. While the universe continued expanding, these colossally huge structures continued to separate from each other and self organize into galaxy superclusters—made of galaxy clusters—made of galaxies—and, at the smallest end of things, individual stars. There is disagreement as to which end came first, the big or the little—or whether ends and middle proceeded all at the same time. Scientists tend to believe the stars were the earliest to become completely formed, even while so many other structures were building simultaneously. Perhaps so—after all, they were smaller.

At the largest end of all, there formed an unimaginably vast something called “The Great Wall.” Stretching thirty million light years across the night sky, it is the largest known structured matter in the universe, discovered by astronomers only in recent years. One must wonder if perhaps other great walls are even now in the making, all unnoticed.

There are so many different types of galaxies they are called the orchids of the universe.

Go stargazing on a rural hilltop on a still, clear night—you’re invited to my uppermost far back meadow, where for years I have kept mowed a large circle I named Astronomy Height. Coos used to roam there, but no more. Behold the wonder, the majesty, of creation. The seeming infinity of stars and galaxies your unaided eyes will see as minute pin pricks of light actually number only a few thousand. Nor can your mortal eyes distinguish which tiny lights are stars and which are galaxies containing billions of stars. There are at least a hundred billion galaxies in that part of the universe our eyes “see,” and the true number is probably (maybe) closer to two hundred billion, scientists say. One recent estimate places it as high as five hundred billion. The number keeps increasing because every time higher-tech telescopes are developed they reveal vastly more galaxies in parts of the universe we thought were empty. But we were wrong, again.

For instance, the Hubble Space Telescope, from its vantage point orbiting the earth, has given us direct new images of galaxies formed when the universe was much younger. In a view known as the Hubble Ultra-Deep Field, the telescope’s camera was pointed steadily at a region which had previously appeared devoid of any matter at all. The long open-lens exposure, nearly a million seconds over eleven days, revealed thousands of far distant galaxies where none were known to exist. Hubble’s mighty successor, the James Webb Space Telescope scheduled to launch in 2021, will no doubt bring many more surprises. The Lord helps them as helps themselves, as they say.