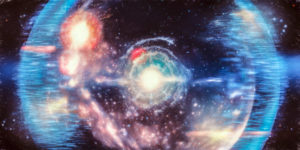 Let’s face it, the universe is messy. It is nonlinear, turbulent and chaotic. It is dynamic. It spends its time in transient behavior on its way to somewhere else, not in mathematically neat equilibria. It self organizes and evolves. It creates diversity, not conformity. That’s what makes the world interesting, that’s what makes it beautiful, and that’s what makes it work.

The meaning of evolution

“The times they are a’changin,” Bob Dylan told us—and he was of course quite right, as will shortly become apparent. “Change” means “evolution” means “change.” The two terms are synonymous. This requires emphasizing again and again. Some people with religious mindsets have tried to narrow the meaning of the word “evolution” to a subset of biology, but have succeeded only in narrowing their own viewpoints. As a designator of change, the term evolution applies quite as broadly to the evolving physical universe and to ever-evolving religions as it does to evolving life. Evolution has several important features, but first and foremost it simply means “change.”

More broadly, and as used in science, the much-misunderstood term “evolution” means never-ending change that happens to exhibit bottom-up emergence, by sheer chance, of ever more complex structures which arise from the constant, random changing of less complex structures that came before. For example, the universe started with a chaotic explosion of primal energy and now quite a few years later we have flush toilets. Thus the universe and life within it has “direction,” from lower to higher, from less to more (of course there’s trillions of steps in between, but I’ll explain that later).

And right there—the case for emergence and direction—is a living example of why some Southern Baptists get mad, split off, start their own church, and take a new name such as Foot-Washin’ Baptists. Quite a few scientists—but less than a majority—disagree with what I just said about emergence and “direction.” And may I just mention that some of those who happen to disagree often disagree forcefully, sometimes even vehemently.

“There is no such thing,” they assert (forcefully), “as direction or increasing complexity in evolution” (though quite plainly for all to see that’s what has in fact happened).  “Ye gods, man,” they say in various ways, “admitting of such ideas as emergence and direction might make it seem as if there could be such a thing as “purpose” behind the unfolding of the universe;  and that—being of course impossible—might be taken to imply the existence of a God—also of course impossible—hovering in the background to decree such purpose! We can’t have that!” they cry, in unison. And you just know, there be hardened mindsets here. Now how is that different from a Foot-Washin’ Baptist?

Never mind them. Plenty of other pretty smart scientists will back me up. While I want you ultimately to make up your own mind about this, I hereby assert (a bit forcefully, if I may say so) that the scientific story of unfolding evolution quite openly reveals a directional emergence which quite clearly proceeds from no complexity at all, to considerable complexity, to exceedingly great complexity. And the story of evolution is ongoing, by no means having yet reached its zenith. (What? Are you claiming that Man isn’t the ultimate?)

For now, pending other things we shall consider, simply note that many scientists, and many churchmen, agree with the idea of emerging complexity with an upward direction, as do many thoughtful people who are neither scientist nor churched. We’ve barely started and already we find a controversy where mindsets go binary and choose up sides.

Evolutionary emergence is characterized by change which, though occurring by sheer chance, is building upward from lesser to greater complexity. And notwithstanding many ups and downs along the way, the complexity exhibits an overall upward direction.

These are facts. As facts, they are equally obvious in both cosmology (the universe) and biology (life within the universe). They are controversial only as a result of mindset-based deficient thinking for reasons you might not expect. The controversy will be more fully addressed in the next chapter where the biological phase of evolution will be addressed in some detail. For the present discussion on physical evolution of the universe, this is sufficient introduction to the meaning of evolution:

Evolution is change, occurring by chance, which proceeds from randomness to self organization that emerges upward toward ever greater complexity.

We can round and smooth our new appreciation of evolution’s full meaning by surfacing tidbits from the word’s etymology. The term evolution has, as one would expect, evolved over time. For instance, the Roman statesman Cicero described the unrolling of a scroll as “evolutio”—a usage that in that early day meant moving from something simple to something more complex. In the second century the Greek historian Aelianus Tacticus described troop movements as “evolution from one position to another.” In his book The Accidental Species, scientist Henry Gee tells us that in 1670 the British Royal Society’s proceedings recorded: “By the word Change is nothing else to be understood but a gradual and natural Evolution and Growth of the parts.”

Charles Darwin’s grandfather, Erasmus Darwin, referred to “The gradual evolution of the young animal or plant from its egg or seed.” Charles himself did not mention that word in his Origin of Species until reaching the famous last word of the final sentence on his very last page, one of the most beautiful sentences in all literature: “…from so simple a beginning endless forms most beautiful and most wonderful have been, and are being evolved.” From these first glimmerings of evolutionary understanding, perceptions of emerging complexity and upward direction have come to conscious light only in recent decades. Let us now see why such expanded understandings have arisen, and why the mindsets of some scientists as well as many (but not all) churchmen still resist them.

IN THE BEGINNING, from out of nothing whatsoever, a big bang brought forth into existence the entire universe. An inconceivably, infinitely tiny, dense dot—consisting of… nothing… known to science as a “singularity”—exploded and cast forth primordial superhot stuff which would become everything that now exists throughout our universe, including us. Think about that. Read the sentence again, visualize it, think about it.

Remember this “nothingness” from whence the Big Bang came. We shall encounter nothing several more times as this story unfolds. Nothing could be more important.

At just about exactly 13.82 billion years ago (plus or minus 0.05 billion years, we think), a nonexistent pinpoint of nothing exploded into existence. Some scientists don’t like that word exploded, they like to say it “released” or “inflated.” Regardless of that, pick your word, in six trillionths of a trillionth of a trillionth of a second the new universe expanded from pinpoint to larger than a galaxy. And that was the merest bare micro-second of a beginning of commencing to get started. Do you have any comprehension of just how big a single galaxy is? Well, our whole universe, containing untold billions of galaxies, is really big. In that minutest fraction of newly-created time, the big bang introduced all the energy that will ever exist. In a future-yet-to-come, long eons after the big bang, that energy will power the stars and all life that will ever live, including our humble selves.

Energy, the source of everything that is or ever will be, originated with the big bang.

And what is energy? Mark this well: energy is what makes up everything that exists in the universe. One often hears the phrase “matter and energy.” Don’t believe it. Matter is energy, as Einstein understood when he wrote E = mc2. There is only energy.

“Matter” is just a made-up idea of convenience because we misperceive ourselves and other things to be “solid”—which is quite literally not true. Everything is energy. Energy can manifest itself in many different forms, all of them quite tiny (except for lightning). And when those energy forms draw themselves close together and hold hands, as they constantly do—quite tightly compacted, like semi-identical little houses in an old subdivision—we call that compactedness “solid matter.” No matter, it really is energy. But once again:  what is energy? That question may be more important to you than you had perhaps ever thought about whilst forming your various opinions and mindsets.

We are awed by the very thought of the big bang—a stupendous event of creation, far beyond the human mind’s capacity to imagine. On one hand, can we imagine that the big bang, as an “effect,” had no cause? Stated another way, can you imagine it as the first and only ever “uncaused effect?” The question confronts the limits of the human mind’s ability to reason. On the other hand, arguing over the matter has no importance, no meaning. People who get het up over it become temporary fools until their minds manage to rise above themselves, to something higher than an argument which is self evidently pointless, unresolvable. Nobody was there snapping photos. The big bang is one of our ultimate mysteries, #1 of many.

In that big-bang instant of beginning, “spacetime” came into being—or at least the potential for what would soon become space and time. In that moment, that very first-ever moment, the potential that would grow into our unknowably vast universe blasted into existence with the greatest unheard roar of all eternity. If a God didn’t make it happen, then why did it happen? Don’t, I repeat do not, simply brush off the question with customary scientific avoidance: “Asking why things happen is not the business of science,” they say. “Nuts,” I say. It in fact most certainly is everybody’s business. It is our very nature as humans to wonder why, and I find it hard to understand a mindset, especially in a well educated mind, that can deny so compelling a question. Yet some of our brightest Nobel Laureates deny it, and in writing, and fairly frequently at that.

It’s rather like another little avoidance science propagates ad nauseum. Most irritatingly, I keep hearing astrophysicists and learned laureates spouting about how “impossible” it is for there to be a “center” of the universe. Listen to their argument:  Standing on earth and looking out at space, we see stars and galaxies red shifting in all directions, which means everything is expanding away from us as “a center.” But, they add, if you were a million light years away standing on some other planet, you’d see the same thing—stars and galaxies red shifting in all directions, meaning everything is expanding away from that “center” too. “Therefore,” they opine, it’s just silly to think of Earth as a center-of-the-universe—adding, as they always do because they simply can’t stop themselves: “as those superstitious priests maintained for so many pre-modern centuries.”

Therefore?  Did you notice the sidestep? I didn’t say earth is the center of the universe. What I said was, the universe logically has to have a center—and that center happens to be wherever it is, which no doubt is not here where earth is. They never finish the argument because the true agenda is to put down religion, Christianity in particular, and to show how wrong was religion as science’s old nemesis ever since poor scientific Galileo’s unjust house arrest. Unmentioned by avoidance in this well-closed argumentation is the fact that the universe—obviously—has from its first instant inflated outward from the point of the big bang. And that, wherever it may be, is a center which most certainly exists and it certainly is out there, we just don’t know where. The fact that the red shift can be seen from any pre-selected point has absolutely nothing to do with the center of the universe, and need never have been mentioned at all. But there is a center.