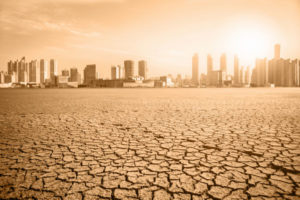 We started this discussion of heat rising above the 1988 average of 14.6 o C (58.2 o F), and have now reached a future average of 19.6 degrees Celsius (67.3 o F)—increases of five degrees Celsius or nine-degree Fahrenheit, respectively. Let’s be reminded here that these degrees of warming are worldwide averages—thousands of daily temperature readings averaged over one year. As averages, they omit mention of the individual temperature outliers that got averaged. Before averaging, those daily temperatures can very wildly on a day-by-day basis, easily ranging twenty to fifty degrees higher and lower than the average. Speaking in Fahrenheit, which most Americans readily understand, this means people experiencing a future “annual average” of 67.3 o F may actually be experiencing daily highs up to 117 o F or more through the hot months of summer and fall. In already-hot countries closer to the equator, such as Saudi Arabia and Algeria, random daily highs may regularly reach 125-140 o F or more. Some places already do, but in years to come they’ll do it far more often.

In the United States:  By the time our world has warmed five degrees Celsius above its average global temperature back in the good old days of 1988, there will be little to say of the formerly great USA that is not more relevantly said in terms of worldwide “climate change”—that flaccid euphemism invented by a denier to deflect our attention away from the true and scary term “global warming” which really means “global overheating.” One could mention that unrelenting extreme heat and years of prolonged drought in the Los Angeles-San Diego region will have rendered it non-viable as human habitat for most practical purposes, though of course some desert rats will hang on, scavenging among the remains of once-glorious southern California. Of course the same could be said for every former habitat between the Rio Grande and Bogota—and, increasingly, across all the southern belt of slave-minded states known as the Old South.

One might mention that water tables across the USA will still be dropping, the remaining aquifers reaching total depletion, as population pressures call for ever more desperate agriculture to try to grow enough food to meet the unmet demand. But the same thing will be said in China and India and Bangladesh, and Greece and Tunisia. Of some interest, one will of course hear a growing chorus of American hawks raucously insisting that we “must” invade and “annex” Canada, which will have growing seasons as good as we used to have, especially in its northern areas. One will of course hear similar foreign policy reasoning in China—and in the belt of stans lying just south of Russian Siberia.

Around the world:  Even a casual observer will notice that a new planet earth is emerging in two obvious ways—some areas are declining as human habitats, while other areas are emerging as new habitats. The latter involves less area than the former. And as new migrants keep coming year after year, finding unstoppable ways to crowd into the new habitats, it becomes clear that no place is sufficiently remote, defensible, or still has sufficient natural resources, to compare well with the old familiar declining areas the migrants are leaving. Several phenomena associated with the new trends are prominent.

The twin crises of drought and flood are crowding surviving human populations into the shrinking zones that remain habitable. These populations are still quite large, making the habitable zones definably “overpopulated” even though the people are fewer overall. The world’s once glorious rainforests are gone, replaced by barren wastes—even that once-mighty Amazonia—along with the billions of animals, birds, trees, flowers and isolated tribes they sustained, their vast stored carbon long since saturated into the air and oceans. All the glaciers are gone, all gone, and the shrunken polar ice sheets won’t last much longer. Around the world coastal cities are inundated and abandoned, and new coastlines reach ever-new configurations as they push farther inland on every coastal plain.

These awesome changes are happening far too fast for most flora and fauna to adapt, so a majority are going extinct. Only the big-brained humans understand what’s going on well enough to adapt and move elsewhere, which they don’t like doing. This sixth extinction in earth’s history is underway with a vengeance. The other over-hot episodes and major extinctions in earth’s ancient past took place over a few thousand years, so that quite a few of those old life forms had time to adapt and survive in the new conditions. But there is no precedent for this human-caused global warming which is taking place over mere decades and will take only a few hundred years to reach its destiny—so quickly that no species has time to adapt meaningfully, not even Man, who vainly caused it all, with all his big-brained, self-serving and exploitive adaptability. There simply is no precedent.

I could go on with this, adding more details for “six degrees hotter,” but it seems unnecessary—too much. The five degrees are too depressing already. They leave me much disinclined to research and prognosticate credible doomsday scenarios in which all the dear men, women and children suffer, wilt and die as our beloved Earth descends toward the worst-case scenario represented by her sister planet Venus. Lovely Venus—surrounded by a concentrated carbon dioxide hothouse, an atmospheric veil so dense the temperature within it exceeds 870 o Fahrenheit, precluding all possibility of any living thing, or so our science believes. What I shall do instead is salute one more vital subject in the book Six Degrees by adapting it into my own context for this disturbing chapter.

The direst threat of all, on earth, at this pivotal moment in time

Did you know that various corporations in the deadly business of extracting coal, oil and natural gas—yes, that same self-serving industry that certainly will kill us if we fail to kill it first—keep trying to figure out ways to mine the methane bubbles that lay around in vast abundance far down on the continental slopes and deep ocean floors, exploit and sell them for a fortune in profit? You didn’t know? Well, our ragtag newspapers these days certainly don’t do their job of informing us about what’s important as did their ancestors back in the days when real, robust newspapers were the vital fount that used to keep democracy alive by keeping the American public informed of things that really matter.

Pay attention now. Our attention focuses on the gaseous leg of the fossil fuel trilogy. Natural gas is an organic compound, consisting entirely of the two elements hydrogen and carbon. Popularly used to heat our homes and cook our food, natural gas is normally transported via big-inch pipelines from well heads to urban distribution networks able to reach every house and building. Chemically prominent as a hydrocarbon, natural gas consists primarily of methane (CH4), plus a lesser amount of ethane (C2H6).

Of no little significance to all of us, methane is a greenhouse gas that happens to be 84 times more potent than carbon dioxide in its ability to heat up the earth’s atmosphere. It doesn’t linger in the atmosphere as long as does carbon dioxide, but the damage it does while it’s there is 84 times worse. Colorless, odorless and highly flammable, natural gas ignites at 1,163 degrees Fahrenheit, but will ignite explosively at a mere 5 to 15 percent mix in the air and often does so with disastrous consequences for people caught in the blast. It naturally occurs in gaseous form, usually trapped deep in the earth’s crust, often in combination with oil and coal. However, that’s not the only way it naturally occurs.

A “clathrate” is a chemical compound that has a lattice structure which physically traps molecules of a different chemical compound. The word clathrate derives from the Latin clatratus meaning “with bars or a lattice.” The clathrates we’re concerned with here are methane clathrates, where the lattice structure is ocean water and the captured molecules are methane gas, the main component of natural gas, a fossil fuel. This compound is a solid, rather than a liquid or gas as rational minds might suppose, and that solid is normally in the form of ice. Methane clathrates are also variously called methane hydrate, fire ice, methane ice, hydromethane, and natural gas hydrate, to mention just some. If you happen to meet one of these terms you will now understand what is being talked about.

This unique gas-and-ice marriage of methane clathrates occurs in truly gigantic quantities throughout the world’s oceans, especially as outcrops on the lower continental shelves and adjacent deep ocean floors. They are believed to form when methane escapes along geological faults, contacts cold sea water, and precipitates as icy clathrate. Lucky for us, this occurs far down in the ocean deeps where temperatures are cold enough, and deep-ocean pressures are high enough, to keep the methane trapped down there where it can do no harm, such as add to the warming of our atmosphere. But it does get un-trapped if something disturbs it, and will trickle up through the surface into the air as billions of bubbles large and small, but for the most part it stays put down there. Clathrates in ice cores taken from Antarctic ocean floors are an excellent source of information about methane and carbon dioxide fluctuations in the atmosphere dating back 800,000 years—a valuable tool for scientific research aimed at countering global warming.

However:  as it might be described by fossil fuel corporations intent on mining it, “Significant deposits of valuable methane clathrate have been found in and under other valuable sediments on the ocean floors.” At this point they are unlikely to mine it because they haven’t quite figured out how. What they are likely to do, as they pole-vault into mining mineral ores off the deep ocean floors, is to dislodge the clathrates and set them loose into the atmosphere. And that is about the worst thing that could possibly happen.

Earth scientists often compare our current environmental trajectory to an event that happened about 55 million years ago, known as the Paleocene-Eocene Thermal Maximum (PETM)—a very significant period in earth’s evolution. The PETM was characterized by rapidly changing environmental conditions, acidified oceans, simultaneous extremes of flooding and drought, and ice-free poles. The atmosphere became hyper-saturated with carbon dioxide to a level of 1,000 parts per million, and the average annual global temperature grew about five degrees (yes, 5oC) warmer.

In short, the PETM was a close analogue of the environmental calamity we are now entering headlong unless we somehow manage—quickly—to halt and reverse our carbon pollution. (Do you think we will? Do you think our leaders will steer us into making that happen?) But it’s worse than that because our carbon emissions are occurring at a rate perhaps thirty times faster than those that caused the PETM. Further, carbon isotope ratios in rocks of that period indicate that we are—all unknowingly—already about halfway down the path of the same pollutants which caused that terribly overheated age.

The PETM became so drastically overheated because the process of runaway global warming had been set loose—the same disastrous runaway process we are setting loose among us today.

For corporate profits, they’re risking setting it loose. They do it for the money.