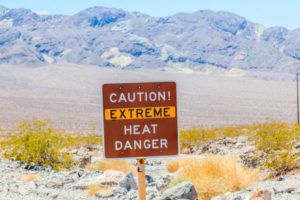 In the book Six Degrees, published in 2008, the first section makes predictions for the period during which the world would grow one degree hotter. As of 2020 all the things predicted have indeed come to pass, though reality in some cases is more severe than the prediction. In 2020 it also has become clear that global warming is speeding up. Weather and environmental troubles we spoke of avoiding for our children’s sake have arrived more quickly than expected—the early consequences of accumulated CO2 we ourselves helped generate are coming home to our own roost. In my hybrid warming scenarios that follow I have used 1988 as the base year because, as explained above, 1) it’s the year we passed the limit of 350 parts per million of CO2 in the atmosphere, and 2) worldwide average temperature that year was 14.6 o Celsius (which is 58.2 o Fahrenheit). Celsius is used for the following degree increases simply because all significant sources use it. For meaningful translations into Fahrenheit, refer back to the table above.

In the United States, our overpopulated demands for over consumption are producing massive pollution by chemicals, plastics, garbage and carbon dioxide. Increasingly severe and prolonged heat waves are causing rising deaths from heat stroke, shortages of certain food crops that are badly affected by heat and drought, and power outages due to sustained high use of air conditioning. Firestorms of unprecedented size and ferocity are wreaking massive destruction that gets worse annually across our western states, and prolonged droughts are expanding desertification of the American West and Great Plains.

Excessive atmospheric heat is producing monster hurricanes and tornadoes. Torrential rains are producing deadly flash floods in which overflowing creeks and rivers inundate lowlands and roads, yet drain away too fast to regenerate the ground water. American aquifers are fast heading toward depletion as tens of thousands of proliferating deep wells draw out more water than rains can recharge. Fracking for natural gas is permanently polluting thousands of wells people depend on for drinking water.

Around the world: Permafrost is steadily melting around the Arctic Circle in Alaska, Canada and Siberia—houses and bulldozers can disappear into the muck overnight—and though it has permanently drained tens of thousands of valuable freshwater lakes, the accessible water table has lowered anyway. Many bird species that depend on water-dependent species such as insects and shrimp for food, are disappearing from the earth, their little deaths unseen and unlamented until the next bird count. The permafrost’s desiccated natural vegetation easily catches fire now, and these Arctic-adapted plants are in any case being displaced by invasive plants moving north with the warming temperatures. Massive quantities of globe-heating methane are belching into Arctic atmospheres as the gas bubbles up and sometimes explodes through melting permafrost that held it frozen for thousands of years.

The ancient glaciers atop the Alps, Rockies and Andes, the grand glaciers of Iceland and Kilimanjaro, even those elders up on the mighty Himalayas—they’re all melting. Many are miles smaller than a mere thirty years ago, though billions of people depend on them for their fresh water. Wildlife is quietly vanishing all over the world, eliminated by human expansion into once-wild habitats and by poachers seeking free food and profit from folk silliness like use of rhino horn to increase virility and as status symbol. The worst wildfires in history have ravaged Australia, Amazonia and American West.

In 2010 unprecedented rains flooded a full one-fifth of Pakistan’s land area. Vital reefs are corroding and dying all over the earth. Bigger, fiercer hurricanes, rare in South America, have struck  (Brazil, 2004) and, for the first time ever, Ireland (2017) while I was there and out in it. I don’t believe I mentioned the accelerating internal out-of-sight melting of the almighty Antarctic and Greenland ice caps, growing increasingly slushy and hollowed out underneath the countless meltwater lakes that now dot their surfaces.

These changes are but the barest beginnings of our worsening weather and climate.

In some places the incidence of moderate droughts will double. Elsewhere the incidence of extreme prolonged droughts will rise from the present three percent to thirty percent of earth’s land surface—thus up to one third of Earth’s overheated ground may become waterless and uninhabitable. As the heating proceeds, continuously hot land surfaces will cause vegetation to shrivel and die, as a result of which ground water will evaporate much faster, causing the newly denuded topsoil to quickly erode and wash away under the pounding of increasingly torrential rain bombs as they are calling them nowadays.

The rate of change will differ in different areas. As always, land temperatures will warm much faster than the oceans, but the slow, unseen buildup of monstrous quantities of CO2 in our worldwide oceans will equate to a thousand nuclear bombs crawling toward their awful destiny. The Arctic will warm several times faster than the rest of the world, changing it utterly, and everyone on earth will be affected, mostly for the worse, by the change. The southern hemisphere will warm faster than the northern. All of these changes moreover will be nonlinear—they will proceed by fits and starts, in spurts followed by slowdowns. During these unpredictable irregularities tipping points of dire consequence will be passed by rapidly, unexpectedly, unnoticed by most of the people—and thus uninformed as ever, they won’t realize what’s yet to come. Hope will spring eternal.

In the United States, polar bears will become extinct in Alaska. Rising sea levels will submerge large sections of New York City, the Florida Keys and most coastlines around the Florida peninsula, and enormous sections of the nation’s Gulf coast for many miles inland. The already beleaguered West will suffer greatly from longer, hotter heat waves, semi-permanent droughts, and failing water supplies from both below (aquifers) and above (vanishing snow packs and glaciers). A new term “wildfire tornadoes” will come into common use to describe a whirling conflagration hundreds to thousands of feet high and a mile or more wide accompanied by winds up to and including those of an extreme class five tornado. The Colorado River, already mostly used up and bone dry in its lower seventy miles for many years now, will wither at its sources, further reducing the downstream flow. Expanding areas of the American West will become uninhabitable.

Increasingly draconian laws will dictate how remaining agricultural lands may be used. The warming northern states from North Dakota to Ohio will become major food crop producers, even as agricultural production plummets in the southeast where people will suffer from soaring temperatures and seriously declining summer rainfall. With each passing year, fewer and fewer birds, butterflys and beetles will be seen. A college professor named Darwin will publish a book titled The End of Species.

Around the world: Severe reduction of natural habitats from global overheating and still-expanding human occupation will cause dozens more wildlife and plant species to go extinct every year, the rarest ones disappearing the soonest. Most humans will be sadly unaware of the danger to themselves from this massive loss of biodiversity. Spreading desertification and severe droughts will continue and worsen in northern China, while massive, devastating floods become yearly norms in the southern provinces.

Unprecedented daytime heat in northern Africa, routinely reaching 110 to 125 degrees Fahrenheit with no significant cooling at night, will cause the Sahara to expand everywhere it can. As one consequence, the Sahel—home to some 150 million people by midcentury—will become increasingly unlivable. Famines will exceed all possibility of meaningful humanitarian response. Wildfires in Europe will spread from the parched Mediterranean up through the forests of Germany, the Baltic states, Poland and Russia, releasing billions more tons of carbon into the atmosphere. Albedo (reflectivity) reversal on the Greenland and West Antarctic ice caps will cause explosively rapid disintegration around their perimeters and increasing slush drainage throughout their interiors. World oceans will further rise in response.

Acidification of the oceans from absorbed CO2 forming carbonic acid, already fifty times above normal, will increase fivefold more. Toxic to some degree for all ocean creatures, the increased acidity will be fatally so for many with calcium carbonate shells such as crabs, clams, oysters, mussels, and—a special case—plankton. All but plankton will be recognized as important human food resources. Exposed to sufficiently high levels of carbonic acid, their shells will corrode, then disintegrate. Extinction will occur above a certain level of acidity when their shells will simply fail to form in the first place, and all over the world the familiar little shellfish will be seen no more.

What will mostly not be recognized is the vital importance of the microscopic life called plankton (from the Greek planktos for “drifter”). Of little concern to almost everybody, plankton are mostly single-celled plants (phytoplankton), plus a diverse collection of bacteria and miscellaneous tiny animals (zooplankton). Floating freely with the oceans’ currents, they constitute fully one half the world’s photosynthesizing plant life. All higher ocean species depend on plankton, bedrock of the ocean food chain, their staff of life. Significant loss of plankton is akin to eliminating most of the vegetation that feeds the vegetarian animals that carnivorous animals feed on. With the added complication that warming oceans will further reduce their reproductive cycle, drastically fewer plankton will be available to sequester the billions of tons of carbon dioxide they have stored in their cells for the last few million years, and so their CO2 will of course be released.

In our oceans, all unseen, something terribly important is going away to be no more.

When one grasps the full implications of climate change, there comes a measure of grief. I first recognized this in May 2014, when scientists studying the massive Thwaites Glacier in Antarctic reported that it had begun a process of “unstoppable” collapse. Something collapsed in me as well. Looking back, I can see it was the loss of the idea that our environmental mistakes could be undone before it was too late. And with that, society’s actual goal became clear: to do all we can, to avert the most damaging outcomes.

We must hope those who claim to lead us, and have the power, can get up the moxie to mitigate, to somewhat alleviate, the impending damage from global overheating. It is already too late to “avert”—averting is no longer an option.