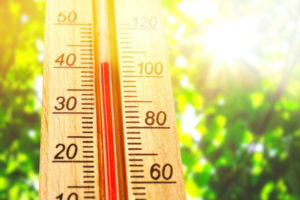 Ten years ago, I knew the climate crisis was looming. Yet it’s been painful to witness climate chaos arriving so destructively in the form of powerful storms, deadly heat waves, and out-of-control wildfires. Many people, including me, once talked about “protecting our children’s future.” A decade on, that future is here, and the children we wanted to save are mad as hell and taking to the streets.

In 2008 the National Geographic Society published a book by Mark Lynas titled Six Degrees. Though some contents are a bit dated, predictions for the rest of this century and beyond, which form most of the book, remain relevant. These qualities not only rank it among the better science-based and well reasoned sources on global warming, they make it more genuinely alarming than some I’ve seen that deliberately try to be alarming.

Using the official climate status reports periodically issued by the United Nations Intergovernmental Panel on Climate Change (IPCC) as a starting point, Six Degrees reflects scientific literature representing literally thousands of the most current and rigorously scientific assessments—so rigorous in fact that few ever come to public attention—of our worsening worldwide climate. In this section I shall use this excellent, authoritative meta-assessment as my starting point for the climate summarizations that follow, supplemented with information drawn from the dozens of books and hundreds of articles on global warming that passed through these hands over the past three decades.

The six degrees, note, are expressed as Celsius, a temperature scale that registers water’s freezing point as 0o C and its boiling point as 100 o C. On this scale the six degrees of global warming start at 14.6 o C (where we were in 1988) and go up to 20.6 o C (where we might end badly). Each degree paints a scenario one degree hotter than the one before.

And right there I think I’ve uncovered why so many otherwise bright people remain so grievously uninformed—unconcerned to the point of blasé—about global overheating. Can you do a Celsius-to-Fahrenheit conversion in your head? As Lynas states, “Most people don’t have the slightest idea what two, four or six degrees of average warming actually mean in reality. These still sound like very small changes when the mercury swings by fifteen degrees between night and day.”

That word “average” offers a good place to start explaining how serious this all is. Forget about local temperature swings. Forget about temperatures averaged on even a continental scale. There is one and only one number that matters here—the overall temperature of the entire planet Earth averaged over one year. A single number for each year. Measured worldwide since 1880, average annual planetary temperature is now definitively measured by thousands of stations reporting temperatures on a daily basis.

For global warming, we use this most meaningful of all numbers, the earth’s average annual temperature, to display a trend line over many years. This has been and is now being exactingly done, and the upward trend shows beyond any trace of doubt that our world has been getting hotter for a long time, and is now dangerously so.

If we are to genuinely communicate on this subject, our second concern must be setting a context that is understandable by most Americans, who are from birth accustomed to the Fahrenheit scale. This old familiar scale sets water’s freezing point as 32 o F and its boiling point as 212 o F. Unlike Celsius, zero degrees and 100 degrees are hardly relevant in Fahrenheit—except we all know that zero is colder’n the old Norse Hel and 100 is hotter’n hell. Therefore, if you’re accustomed to thinking of, say, 98 o Fahrenheit (which is 37 oCelsius) as a really hot day, someone mentioning 46 oC as “extreme” doesn’t sound too bad—until you learn that 46 oC equals 115oF.

In the international science community, scientists everywhere speak metric. The metric system is a handy, very logical base-ten numerical system used almost everywhere in the world except in the USA. It uses the Celsius scale for measuring temperature, grams for measuring weight, centimeters-meters-kilometers for distances, and so on. This includes American scientists, who usually don’t think to mention what 37 oCelsius means in Fahrenheit so that you might comprehend what they just said. They forget that most other Americans do not commonly speak metric.

In the USA scientists are about the only ones who do. Everyone else, including me, plows stubbornly on happily embedded in the randomly illogical but deeply familiar ancient British menagerie of weights and measures—i.e., inches, feet, pounds, pints, acres, etc. Within my own memory, all ordinary non-scientific Americans (i.e. 98% of us) soundly rejected a federal initiative to convert the USA to the metric system—an effort set upon with much fanfare…which quickly fell flat and was abandoned to great public relief.

Nevertheless, in order to genuinely grasp the horror of global warming that looms over us, one not only must have a genuine understanding of how Celsius and Fahrenheit interrelate, one must further be able to grasp how they both interrelate with “parts per million” (ppm) of carbon dioxide in the atmosphere. Now if you are one of that ninety-eight percent who hasn’t much used this type knowledge since you were in high school chemistry or physics class (you don’t remember Boyle’s laws on the PVT of gases? tsk), you may have to furrow the brow fronting your brain to get your mind around the hard fact that anything over 350 ppm (that’s parts per million, don’t forget) is an existential threat to all human life. REPEAT:  350 ppm is an existential threat to all human life.

Be informed, gentle reader, that our society passed that very existential 350 ppm way back in 1988. We are at this moment up to 415 ppm and rising fast toward 500 ppm. Pay attention now:  If we don’t get back down to and well below that 350 ppm of carbon dioxide in our air, there most certainly will be hell to pay after a very few more decades.

The problem is, the big boys—i.e., the hide-bound coal-preferring power plant industry, the too-big chemical and agro corporations, the mega-giant manufacturers of stuff and worldwide big-box retailers of stuff, abetted by the non-producing Wall Street big-finance sycophants who keep them all rolling—these big boys now have such total control over the big economic system that we all have no choice but to add our little parts to the daily-monthly-annual increase of CO2 in our common earth-wide envelope of air we all must breathe. And it’s not just the big boys. Every little trip to the grocery in your trusty internal-combustion-powered car adds several more ppms to the global total of carbon dioxide floating around in our planetary atmosphere, working its devilish greenhouse effect to further heat up the planet we live on. Thus we can’t avoid it.

We—all of us collectively—have Topsy-like done up a worldwide economic system that is surely going to kill us unless we fairly quickly un-do it. Will we? What do you think?

Abetting incomprehension, climate change experts tend to be vague concerning the reference points one needs for simple orientation. It is common, for example, to read that “last year the world got two degrees hotter”  …  while your intellect insists, “Hotter than what?!” This elementary deficit became apparent when I began looking around to find hard baselines. Among the surfeit of available sources, some state the case in degrees of increase since pre-industrial times (55.4 oF), some compare increase to the 20th century global average (57oF), and some simply compare the current year to the previous year. Still other non-optimal options are variously used, and a seeming majority of sources don’t provide any reference baseline at all. Vague is useless. What a mess.

In the climate arena, where every word and number can prove fortuitously controversial, there must be great temptation to avoid committing to specificity. Hereby committing, I personally favor using 1988 as a baseline (worldwide average temperature 58.2 oF, or 14.6C), because it’s the year we reached and exceeded 350 ppm of atmospheric carbon dioxide—the endgame-threshhold we must get back down to just for starters in saving ourselves. Actually, to avoid climate catastrophe we have to go much lower than 350.

One cannot be properly alarmed if one lacks proper perspective, which probably helps explain why we have gone forty years tra-la with no (that means “no”) serious effort to rein in much less reduce our carbon dioxide emissions. In consequence of this lunatic inaction our entire worldwide human civilization is hurtling toward the uttermost edge of collapse from unprecedented climate disaster beyond all imagining. Those who still think this an exaggeration simply don’t get it. These few figures illustrate the trend:

… (by 1988 CO2 pollution is accelerating on an exponentially rising curve) …

Question marks fill the temperature spaces in future years because they are unknowable. There is a definite correlation between carbon dioxide and temperature. We can’t quantify the correlation because there are too many unknowns, but we do know carbon is the driver. The more CO2  we put in the air the hotter our world will become—we just can’t predict how much hotter or how fast, as there is no historical precedent. But we can make some very well educated guesstimates based on our growing knowledge and increasingly sophisticated computer models. As to causes of historical climate warming, modern manmade pollution is very different from the causes of those ancient climate changes so many thousands and millions of years ago, so we can’t trust them as a basis for understanding our present situation. Informed estimates based on documented recent trends and a lot of clever modeling are all we have to prepare with in our unpreparedness.