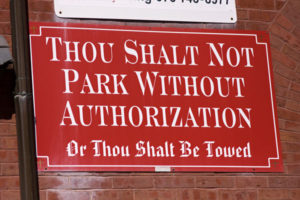 They Can’t Both Be Right

My mother was raised, as they say, in the  Baptist church and solidly favored it over her long lifetime. My father solidly preferred the Church of Christ and that was that, Amen. As it happened, no Baptist church existed in our little prairie town, so it was father’s church or nothing. She went, not always enthusiastically. Necessarily, so did my sister and I.

The Church of Christers were a small congregation, forty souls or so at their best revivals, and many times we two were the only children present. I often listened to their boring preachers even when my parents thought me mentally absent, so that between the ages of two and ten I learned something of the C of C point of view. My mother’s occasional commentary randomly educated me to points on which she disagreed with C of C doctrines so that, all in all and even at a tender age, I knew more than my parents thought I did. There was no reason not to keep this fact to myself.

The foremost thing I understood was that these two Christian protestant denominations, which I now understand to be definably fundamentalist, regarded each other across a minor doctrinal divide that loomed larger than the largest canyon in the minds of their respective adherents. A core disagreement was whether the singing of hymns would or would not be accompanied by some sort of musical instrument, such as a piano—like our old upright my mother played at home. In the C of C, instrumentation was anathema. Sin.

Church of Christers, believing that Man was created in the image of god exactly as The Book says, held that the human voice—being part of the bodily package—was thus likewise in God’s image. Therefore they maintained, with an if-then reasoning I never quite understood, all songs sung in their churches must be sung a capella—i.e., the holy human voice alone, unadorned by instrumental accompaniment of any kind. From early childhood gleanings I understood that this point was very important, fiercely important, to C of C adherents, though it never seemed important to me. We had a piano, didn’t we?

This tiny minority of humanity also coincidentally preached that every human being who didn’t believe exactly as they believed was “lost,” damned and bound for eternity in hell. But that didn’t register with me as significantly as the musical issue, probably because I was of a musical turn from birth. One of my earlier memories is of straining upward on tiptoes so my fingers could just reach the keys and do interesting things with them.

My mother of course disagreed with this particular C of C doctrine. That’s just silly, she would say, righteously dismissive of their intensely held anti-piano belief. Having played piano for hymn singing in her Baptist church from early teenhood on, she loved it and missed it. My parents agreed to disagree harmoniously. This state of things was serendipitously lucky for me because, early in life, I came to a clear understanding that my parents couldn’t both be right. Though I wouldn’t realize it until decades later, it was a life changing understanding.

If my father was right, then that meant my mother had to be wrong, and playing an instrument while singing in church was, as they said, a sin. And sin, they both agreed, was the worst thing one could commit. Conversely, if my mother was right, then my father had to be wrong—and there sat that big upright piano against the wall in our living room, a wholly normal part of our daily life. It seemed so innocent, joyful even. Seldom passed a week when I did not hear my mother accompanying herself at that piano as she sang her glad old songs—and if my dear mother did it, how could it possibly be a sin?

I myself had been learning to play piano from an early age. I remember still that feeling of arms stretched above my head to reach the keys, learning which combinations sounded pleasing. I learned early about two-note harmony, but I also remember wondering:  If my authoritarian father thought it sinful at church, how could it be not-sinful at home?

Perhaps, I reasoned somewhere at around age four, they’re both wrong. What then? That the two most important, most necessarily trusted people in my young life might embody such unthinkable flaw was too much—I’d put the thought down and go out to play. But the conclusion reached after some pondering stayed with me. They cannot both be right. My parents disagree, therefore at least one of them has to be wrong. That childhood conclusion seemed more important than trying to figure out which parent was “right.”

And it was. The matured understanding that grownup people in positions of authority can be dead wrong (e.g., Saddam intends to unleash his terrible weapons of mass destruction against the USA) has stayed with me for a lifetime. And it has served me well.

It served me even then, through my childhood and teen years for, as it came to pass, I would turn out to be neither Baptist nor Church of Christ. For my mother’s sake I tried, when we eventually moved to a more southerly clime that had a Baptist church. But it was too late for me. I tried to be a Baptist so she’d stop worrying—pestering me, actually—about my unsaved immortal soul. But the Baptist beliefs never really clicked any better than C of C beliefs had earlier. Today they’re far from the universe I dwell in.

Becoming familiar with Baptist doctrines, comparing them with C of C doctrines, I realized all over again that they couldn’t both be right, though both were adamant of their rightness. They could even, I realized, both be wrong. It then was not a great stretch to conclude that all protestant denominations must be at least partly wrong, because—clearly—their doctrinal disagreements were the very basis for their having subdivided into existence in the first place. I found it logically impossible to align with any of them, for which of their variant doctrines could I know were right amongst their wrongnesses?.

Over those growing-up years my spiritual apartness spread to all other protestants, to all Catholics, all versions of Christianity. If they all differed from each other, disagreeing often and with evident animosity, they could not all be right. Somebody—everybody—had to be wrong about something, maybe a lot. If some were wrong, maybe they all were.

Then I was fully grown and, as personal evolutionary chance would have it, studied European history in college. In most representations, European history is the two-millennium history of evolving Christianity expressed through human foibles, vanity, conquest and greed. Learning for the first time the gory details of how Christianity was spread across Europe, mostly by coercion and the sword—convert or die—I concluded that any social institution which as a condition of membership requires people to accept its doctrinaire dogmas, unexamined and on faith alone, was not for me.

On comparable grounds Judaism and Islam, the Hindus and Buddhists, the Taoists and Confucians held nothing more than dispassionate academic interest for me. Somewhere inside me this deeply disinterested apart-ness impartially grew to encompass organized religions of any ilk, every ilk, with their endless squabbles, battles, bloodshed, undeniably manmade beliefs and anti-social subdividing. If a religion was organized, that meant it had codified its exclusionary doctrines and dogma. Therefore it could be wrong.

Thus it was not any religion that set in motion my lifelong interest in spiritual matters.

No, it was something else entirely, unrelated to any known religion. In fact it was nothing “religious,” it was something “spiritual.” Because of it I long ago decided to strongly distinguish between “religion”—which inherently means “organized” and requires on-faith acceptance of prescribed doctrines—and “spirituality” which involves neither of these. There are many things I deem spiritual, but I use the word religion only when referring to organized religious organizations—organizations that typically have doctrines and dogmas, and proselytize, and tell you what you must believe or else.

I prefer the term spirituality for referring to that inside-feeling which associates me with the immaterial world beyond science’s present boundaries, including the Master Universe Creator some people call Jehovah, Allah, God, Manitou, or whatever they call it. My unexpected learning in this arena began early and poignantly. I was three years old.