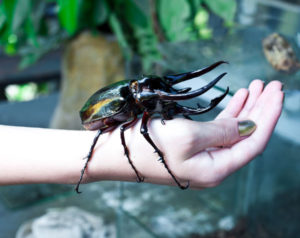 The imbalance of nature

I digress. The point is that, every summer, some insect shows up in noticeably greater numbers than any other insect, and in each year it will be some different species than was dominant the year before. And it’s not just bugs. I’ve noticed such yearly fluctuations in other critters—rabbits, squirrels, terrapins, deer. Every few years we get an absolutely bumper crop of acorns and hickory nuts—and the following spring will see a bumper crop of new baby deer. Under some trees I’ve seen the ground so littered with acorns as to make walking treacherous because they roll under one’s feet, like marbles. The deer know where the nut trees are and make their rounds diligently, growing fat, then fatter with child as they lead their deer lives through winter to birthing in the early spring.

Different species wax dominant every year—frogs, deer, chiggers, acorns—so that nature is never in balance. One hears loose talk—sometimes in supposedly learned quarters where they should know better—about “the balance of nature.” Balderdash. There is no such thing as a balance of nature, nor has there ever been. Nature never was in balance, here, there or anywhere, and through all eternity it never will be until entropy reigns.

Be thankful for nature’s eternal imbalance, because it’s one of the most important dynamics in the universe:  it causes evolution—that is to say, change. Without imbalance, nothing would happen. The world we know—the very universe in fact—could not exist.

Nature’s imbalance works generally like this. The “more” of something that is “here” will naturally flow toward “there” where there is “less” of it. Stated another way, nature seeks equilibrium—but it never truly reaches it because, when the excess over here has flowed to balance with the deficit over there, inertia carries the motion onward until excess and deficit become reversed, like a pendulum. They may slosh back and forth a while, perhaps even reach “apparent” balance, like water in a bathtub, but that’s just illusion. The water is still in motion, its molecules evaporating into the air, and after a while the bathtub will be dry, its water all transferred into the air and flewn a’wee, as they say.

If the imbalanced something is air, i.e., atmosphere piled up in miles-high waves, the high pressure peak over here will flow toward the low pressure valley over there. The resulting dynamics are what we call “weather.” If such oscillations should happen to display long-term patterns that seem to endure for hundreds or thousands of years, we call those patterns “climate.” But don’t get too used to the climate you’ve got, because sooner or later it is most certainly going to change to something else. Chances are that it won’t be as comfortable as the climate you’ve become adapted to—but then you’ll have to adapt anew, and that’s the dynamic beauty of the whole thing.

In the natural course of things our planetary atmosphere has been sloshing around ever since it first formed a few billion years ago. Our world oceans do the same because, notwithstanding they’re a lot heavier than air and slosh more ponderously, the moon’s gravitational attraction is strong enough to tug them into massive motions that we call “tides” which slosh back and forth between continental shores. Here too, such fluctuations of the ocean tides act like a pendulum—continually seeking equilibrium but never reaching it because of other forces that affect it.

These dynamical actions of natural things are in a never-ending state of dis-equilibrium—an imbalance of nature, evidenced by grasshoppers, hickory nuts and helgramites. The imbalance has always been with us, since time began. In the aftermath of the big bang—or the Let There Be Light if you prefer—the imbalance of energetic hot plasma blown out in this direction chanced to be a tiny fraction more dense that the plasma over in that direction—a “fluctuation” we call it nowadays, rather like the earth’s fluctuating tides.

Amplifying the imbalance, the mysterious force we call gravity caused even more particles from the less-dense area to flow toward the more-dense area, eventually leaving a bit of near-empty vacuum behind. No longer was there just one big aftermath of the big bang, now there were two regions, different from each other, one dense and one vacuum-like—i.e., the handiwork of evolution through gravity. And this interesting phenomenon was the earliest, first-ever example of self-organizing building of structures, which is what the universe does notwithstanding that most people are uninformed about it—it’s not taught much in schools or church.

That early universe kept expanding outward from the point of the bang, like Fourth-of-July sky-rocket bombs bursting in air. It gradually cooled and thinned until atoms could form and great clouds of hydrogen gas came into being—clouds a bit denser over here, clouds a tad thinner over there. More dense flowed toward less dense. Where they met, collided, merged, the pendulum effect caused the whole mass to overreach a bit, forming itself into a sort of disk that naturally began to rotate, in motion that became ever more circular—and wound up forming a unique complex of gases that today we call a galaxy.

This scenario repeated itself billions upon billions of times throughout the universe, as the universe itself continued expanding out, out and away from the dot-point that had been the big bang—in scenarios large and small—until today it is almost fourteen billion years across, out where time and distance are indistinguishable. On a large scale galaxies clumped together in so-called clusters, which then clumped into still larger super clusters.

In the other direction, from larger to smaller, gaseous clouds inside the galaxies condensed under gravity’s irresistible tug into swirling dynamos that ignited and were stars—one of which we call our sun. Around most stars left-over detritus balled itself into planets orbiting their parent star. Now, nearly fourteen billion years after the big bang, uncountable billions, trillions, duodecillions of such star-and-planet combos are gathered together in the uncountable gazillions of galaxies across our wide universe. Every time we invent a better telescope that can see farther, it reveals ever more distant galaxies.

All this happened because of the imbalance of nature. The result of this imbalance is the dynamic process we designate with the word “evolution.” Uninformed minds sadly misperceive the word as some sort of threat to their religion perpetrated by a bearded fellow named Darwin and having to do with the way in which biological species came to exist. In reality, the word evolution is simply a synonym for “change,” and it applies to everything—everything that is, here on earth and in our particular universe. Everything constantly changes, so everything is in a state of evolution. Evolving. Every…thing.

Evolution is not only the changes that followed the big bang and formed galaxies, stars and planets, and then spawned the first life on those planets—the initial “lower” forms of evolving life. In a more sophisticated form, evolution was the change whereby a self-conducting process of natural selection enabled certain living things to survive and thrive because they were coincidentally better adapted to their environments. In a yet “higher and emerging” form, evolution was the change that enabled surviving-thriving organisms to become ever more complex, until the most complex of them all—the highest level of complexity yet evolved in the whole universe—emerged and named itself homo sapiens.

Those poor uninformed minds miss the fascinating point that an all-knowing creator—all knowing enough to conceive and cause an entire universe to emerge from an infinitely tiny dot, then form itself into spherical structures nested within bigger structures—could invent a method as brilliant as evolution to carry out that Creator’s grand plan, whatever that plan is. They cause themselves grievous angst—and too often impose it on others—because they so grievously miss the point that evolution is the smartest idea, the most divine idea, we have ever learned about in human history. God is great, as some say.

Evolutionary change, driven by nature’s infinite imbalances from your nose to the farthest reaches of the universe, is light years more ingenious than any idea a mere human mind could conceive. It is a divinely brilliant idea worthy of—and only of—an Infinitely All-Knowing Creator of Everything. An All-Being. All-That-Is. Such divinity will be explored at more depth in chapters to follow.