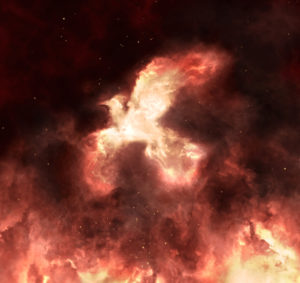 About ten years ago I dreamed a poignant dream about a future, three hundred years hence, in which a vastly reduced humanity not only has survived the terrible consequences of global warming, it has re-emerged with significant culture intact and a technology sophisticated enough to build powered dirigibles for long distance air travel. As we plunge—careen—into a century directly ahead that promises to wreak the worst disruptions in human history, what can we, the destroyers, bequeath to our children three hundred years down the road, the inheritors, that is worth bequeathing?

In certainty that they will curse their ancestors stupid enough to do what we are now doing, how can we convey to those future descendants, as they in their turn grow old and become wise elders, that we indeed had some wisdom worth passing down? How shall we, in the here and now, be meaningfully supportive of those persistent survivors, those environmentally sensitized brothers and sisters of every ethnicity and color who, blended together—the new Native Americans by then—will be both the conveyors and distant inheritors of cultural values that are intrinsically worth valuing across the impending catastrophic global warming divide we seem so helplessly unable to rise up and prevent?

Men had more strength for lifting and harvesting, therefore they were worth more than women.

Women had more nurturing strength for raising up the next generations,

therefore they would come to be valued for this as were the men for their physical strength.

Growing in knowledge, in understanding, in wisdom and in spirit, the better to help each other grow,

would become known as all men and all women’s mutual purpose,

therefore both would finally grow to value each other equally.

therefore, to feel and to take on the responsibility to strengthen life, nurture life, and consciously pursue a lifetime of growing in love that sustains all living things and the living earth itself was the highest value over all other values then, now and for all the ages to come.

Most ancient human lore of all

The Phoenix Values can be written down now, but no written medium can be relied on to carry them forward. Age and mildew, not to mention warring, ravaging Man, are likely to destroy most paper-borne writings over two centuries of neglect, and digital media are relevant only until the electricity stops. Besides, all digital media, like all plastic, degrade and ruin—they are made to not-last, to turn obsolete, useless. No, the Phoenix can rise anew only if it has been preserved in humankind’s oldest and most proven repository, so casually and so wrongly dismissed—the folk legends and myths, and the generational memories that sustain the truths and real events hidden within them over long ages.

If you posit four to five human generations per century, that multiplies out as four to five hundred generations over ten thousand years. Is it really so extraordinary to suppose that massively impressive events could be passed down in our collective human memory over such a period? Two of the most persistent ancient “myths” in the shared human mythology—“the” great flood and “the” destruction of Atlantis—make handy examples.

Yes, after hundreds of generations their legends survive. And yes, an abundance of evidence indicates that there did indeed occur a massive worldwide Great Flood. Today it happens to be best remembered in its Old Testament version—that old myth of preserving “all” the animals two-by-two in Noah’s great ark. But the aberrational ark story doesn’t stand alone—that flood also was preserved in a thousand tribal memories that survive clear around the world yet today in the form of folklore—and in a scientifically verified layer of flood-deposited fine clay eight feet thick and forty feet deep under eastern Iraq. Then, after the flood, those months of unremitting torrential rain.

And yes, it is virtually certain there really was a large island whose population of seafaring traders were well known throughout the ancient Mediterranean world as Atlanteans. And yes, that large island very likely did perish eleven thousand years ago—exactly as Plato reported based on folk legends passed down to him from Egyptian lore already ancient in his day—in a watery catastrophe when a large asteroid from space crashed directly into it, triggering volcanic activity that did indeed leave the Atlantic Ocean west of Gibraltar impassable for centuries due to floating ash and pumice…and coincidentally setting off the inconceivably huge tsunami that washed fully over whole continents, passing around the world to became remembered by peoples everywhere as “The Great Flood.” …and the Atlantean survivors, known for centuries throughout the Mediterranean as ‘those seafaring traders of mysterious unknown origin called Phoenicians’…faded today into the beautiful people of unknown origin residing in modern boundaries called Lebanon, Jordan, Palestine…

Trusting, then, in the power of human folk memory to carry an important message down through the mere fifteen generations of a mere three centuries, what is it we would like to convey to our descendants who survive after another worldwide catastrophe—this time caused by humanity itself and known forever thereafter as The Great Global Warming?… …our very own loving, cooperating, mutually supporting descendants, who will neither notice nor take any interest in their blended Indian-European-World ancestry, who will emerge after three hundred more years into old earth’s next springtime of renewal…?