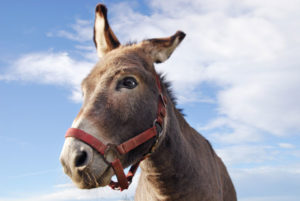 Help Others or Serve Self?  We each live and strive according to this fundamental choice, usually made early in life.  People motivated to help others display empathy and compassion for the wellbeing of all, including the poorest and least able. They value people higher than wealth and power, and do not seek to advance self at the expense of others. Self servers value symbols, wealth, and power over people, and display unconcern for the unfortunates who lack life’s basic needs.

Values as Political Parties. Selfish values have totally taken over the Grand Old Party of Lincoln. Compassionate values dominated Democratic Party policy from 1932 through 1975. Since 1980 both parties have increasingly pursued the self-serving idea known as supply-side economics, even as its harebrained “trickle-down” theory produces only extreme income inequality and fast-rising poverty.

To Get Our Act Together. The modern Republican Party has become like a tree with a poisoned root, from which the poison spreads up the trunk and suffuses every leaf. Although we must replace the poisoned root – economic selfishness – with new laws that serve all Americans equally, progressives are wasting time plucking at the many leaves. Outraged and off balance, our constant reacting to Trump’s initiatives wastes our energy battling effects rather than causes – and only helps Trump keep the initiative. Our unfocused discussions of Republican actions are like a handful of darts flung at a dartboard – most hit the wall all around the board, two or three hit the board…and none are effective.

1. ECONOMIC RIGHTS. Political liberty is meaningless if you don’t have enough money to live on. Every American NEEDS personal income sufficient to buy eight Economic Rights: 1) food adequate for healthful nutrition; 2) clothing adequate for all seasons; 3) shelter, including utilities, of adequate size and quality for individuals and families; 4) complete lifetime health care including prevention, treatment and hospice; 5) dependable transportation according to need; 6) any insurance mandated by law; 7) in young adulthood, moderate savings or cost of education, but not both at the same time; and 8) adequate retirement income. These rights represent The Real American Dream.

2. EQUAL OPPORTUNITY. Every working American must be paid not less than a Living Wage minimally sufficient to secure these eight Economic Rights. No employed citizen shall be deprived of equal job opportunity, equal pay or promotion on any discriminatory basis whatsoever. Tax-paid safety net programs must ensure that no unemployed American lacks the eight Economic Rights.

3. UNIVERSAL RESPONSIBILITY. All Americans are mutually responsible for our mutual wellbeing. All income above the cost of attaining the eight basic Economic Rights is a privilege of being an American citizen privileged to live in the USA (which is great and has always been great, notwithstanding a few sorry episodes; Democracy in the American republic is the greatest idea in the history of the world). All privileged income and wealth is taxable in the Common Interest of All The People of the United States in mutual support of each other and in loyalty to our commonwealth.

is to take back the Presidency, the US House of Representatives, the Senate, and most State and local governments in the 2018 and 2020 elections.

THE #1 PROGRESSIVE PRIORITY is to regain disaffected WORKING CLASS VOTERS who enabled Trump’s win because they believed the lies that he would restore American jobs and good incomes. Though many haven’t heard of “supply-side economics” or “trickle-down” theory, they know their income and financial security have gone steadily downhill ever since 1980. WE MUST

1) talk to them about these false ideas and the Trump/Republicans’ deliberate deceptions, and about

2) our Progressive Promise to enact into law ECONOMIC RIGHTS for every American citizen.

THE DEMOCRATIC PARTY’S BURDEN. For nearly 40 years Republicans have constantly beat their drum of lies that Democrats are bad, “Liberal” is bad, Government is bad, Regulations are bad, a social safety net is bad. Any lie repeated long enough will be believed by some – and, as the 2016 election shows, working class voters no longer trust the Democratic Party to help them.  The Clinton  campaign failed to address this perception.      THEREFORE: our NEW MESSAGE MUST BE:

We Progressives are RE-MAKING the Democratic Party, and we ask all working Americans to

HELP US MAKE THE DEMOCRATIC PARTY SERVE YOU LIKE IT USED TO.

You certainly can’t trust the Republican Party to help you – they clearly serve only the rich.

THREE VILE DISTRACTIONS:  How to Avoid and Surmount Them

1. TRUMP TWEETS. Trump’s incessant news-grabbing blurts, and Republicans’ law-degrading initiatives, are designed and intended to dominate the news and keep Progressives off balance. Sadly this strategy is working. It will continue to work as long as we do exactly what Trump Republicans want by going nuts over each and every one of their daily outrages. It is imperative that we STOP letting “resistance to Trump” dominate our thoughts and talks – our “resistance blather” only helps Trump continue to dominate all discussion. We must of course continually resist this reactionary outfit, but that’s the easy part. REGAINING THE POLITICAL INITIATIVE  –  moving from negative to positive,  so we can shift public discussion to the economic changes that are so vitally needed  –  this requires work not even well started…and time to the 2018 elections is fleeting.

We must PROMISE AND DELIVER on 1) restoring millions of good-paying jobs in the USA, and 2) enacting a Living Wage for household income. And we must effectively  communicate this simple platform to working voters nationwide. THEY are where the winning margin of votes resides.

3. MONEY IN POLITICS. Money is NOT the message, the message is words, ideas and issues. Don’t believe those who insist we must pull in ever more money-money-money to win elections: MONEY IS THE PROBLEM! We will win 2018-2020 only if our WORDS convince voters to vote for our economic ideas. We must regain the trust of economically distressed working class voters whose formerly-Democratic votes tipped the election for Trump based on his phony promises to bring back jobs and raise household income. The prospects for dramatic economic improvements are unlimited, but they are not getting the attention necessary to cross the tipping point of lower-income voters’ legitimate economic interests…and their essential votes. Progressives, step up and be heard!

For those interested:  A substantial number of ways to implement millions of new jobs, living wages and other fundamental improvements in our capitalist economic system may be read at Populist Corrections on this website.

This copy courtesy of The Fixy Populist at fixypopulist.com