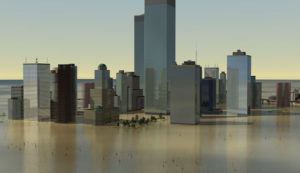 During my lifetime, a mere eighty-two years, I have witnessed a major shift from ideological wars over territory, waged by nation-states, to unrecognized but unrelenting rapacious aggression for wealth by giant mega-corporations intent on dominating the income and wealth of the citizens of all nations. The unspoken motivation driving corporate control over populations everywhere is a greed-based ideology of unconstrained pursuit of profit—the sole common purpose of all corporations. Like a mindless monster loosed in a nursery, this corporate ideology victimizes and impoverishes ordinary people innocently seeking nothing more than the daily security of food, clothing and shelter, perhaps a hopeful education for their children. During the first half of my life things were better than this.

From 1937 through 1979 I experienced the New Deal, the New Frontier and the Great Society. Some of the many benefits I’ve enjoyed under their compassionate programs, aimed at betterment for All The People, included low-interest loans (National Defense Education Act) for a college education that underpinned an interesting career with income security, followed now by Social Security and Medicare in my very adequate retirement. Those decades following the Great Depression were characterized by the fewest economic downturns in U.S. history, the highest income taxes in U.S. history, and the tightest governmental regulation of business and corporations in U.S. history. In those four decades of prosperity the USA enjoyed the largest middle class and the lowest poverty in its history.

All this went into reverse starting in 1980 when the Reagan crowd invited a selfish, extremist free-market ideology to transform and control the nation’s economy. It began with an orgy of corporate mergers, buyouts and hostile takeovers that drastically reduced competition, institutionalized monopolization, and loosed a transition to corporate gigantism that continues today. In direct consequence, the last forty years have seen constantly growing extremes of inequality—a tiny minority of Americans grown filthy rich, accompanied by deep erosion of the middle class and a massive increase of Americans descending into poverty. Our graduated income tax system has been manipulated to reduce taxes on the rich by more than half while shifting ever more tax burden onto the middle class and ignoring sales taxes that fall most harmfully on the poor. While corporations set up faux headquarters offshore to avoid their fair share of taxes, free market ideologues exert constant pressure to cut government programs because “they cost too much, we don’t have enough revenue.” Yet corporations grow ever larger, more controlling—it’s what they do.

Young Americans today—every soul under age forty—do not recognize these trends as criminal theft of their own wellbeing. They do not feel what has been lost, for they have never known it. The young perceive this degraded status quo as “normal” because they cannot forget what their memories have never experienced—and merely reading about the good years between 1946 and 1979, the best economic times in our nation’s history, just isn’t the same.

We let this happen. We acceded to constant pressure from ideologues who control the corporations and don’t give a damn about democracy. They fervently believe in hierarchy of social classes, of themselves the rich over everybody else, aristocracy over peasants. If they could further cut their hated labor costs by restoring slavery, they would. Over forty years they have quietly schemed, organizing a giant octopus with tentacles of money deeply into our Congress, our state legislatures, county and city governments, school board elections—the goal is control, un-democratization.

Their structure is capitalism, and its vehicle is the corporation. Though it long helped build this great nation, it has now become a destroyer of America’s promise of liberty and opportunity for all. Political liberty is meaningless when you can’t afford food and medicine. Every economic crash in U.S. history was caused by gamblers speculating on corporation values in that vast casino called the stock market. Take a hard look at our history—you cannot find an exception. The misery this constant boom-and-bust structure has caused—the grief of savings lost to bank failures, of homes foreclosed by greedy financiers who caused the problem in the first place—is our great national disgrace.

To stop this never-ending train wreck we must ensure real, genuine competition while precluding corporate greed. Here’s how. Every enterprise that must be a monopoly will be controlled by a government—state, local or federal as appropriate. Every corporation controlling more than 5% of its U.S. market will be subdivided into competing employee-owned cooperatives. Millions of new free enterprise co-op jobs will manufacture everything 326 million U.S. consumers need, and all foreign trade agreements will be abolished. Our highest priority foreign policy will focus on helping other nations pursue comparable independent self-help economic adequacy for all their citizens.

For the interesting details in bill-ready legislative language see  Populist Corrections elsewhere on this blog.