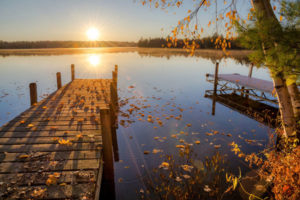 At 5:30 AM on a morning in mid-summer the world looks gray.

Now, thirty minutes later, there still is so little light that I can scarcely see to write. But I can begin, for the light will continue growing now, as the sun rises, though I may write a little larger and a little slower than usual.

Everything has changed dramatically from just a half hour ago. The light intensity has increased from a low-visibility deep gray to the present light gray tinged with a faintest suggestion of pink. The pink is growing.

There were more shadows and mysterious shapes just moments ago. I see now that most of them are buckberry bushes, and other assorted friendly weeds. The great black bulks that pass from spot to spot are my cows – but I recognized them. They recognized me too, and duly took note of my presence with their big brown eyes. I suspect they see better than I.

I am seated beneath three large trees that grow on the hillside some eighty feet above the pond, about halfway up between the house and the barn. These aren’t the only trees on the place – they just happen to be clustered in a way that gives comfort to he who sits beneath them.

Day before yesterday I sat beneath the giant of all trees on this place. I admire it. A groundhog has her den under the rootknees. I once brought a little grounded sparrowhawk up here and placed him on a limb, secure from cats. Within an hour, from that point, he successfully completed his learn-to-fly trials.

The changes that take place at this time of day come in rapid fashion, and are so beautiful. What a pity that most of us usually sleep through them, and those who are awake seldom notice.

When I first arrived the only night creatures singing were the night crickets and some kind of night bird who sounded as if he’d be more at home in a swamp or rainforest. Now, so shortly later, the chorus is in full throat from one end of this place to the other. All the day birds seem to have awakened, and I distinctly hear robins, larks, grackles and some kind of warbler. They intermix their voices like a feathered symphony and the crescendo steadily builds.

Down at the end of the pond the frogs add a special percussive section. They were mostly silent a while ago, except for an occasional BA-ROMM or “click.” I don’t know how they do that click. Now they seem to have been awakened by the birds and there is an echoing medley of “nee-deeps” and other froggy sounds emanating from all over the pond. Frogs are my special friends, only they don’t know it. If I were to walk down there right now there’s be a crashing wave of C-R-A-A-Ks and splashes as they fled before my approach, a little tidal wave in reverse, heading for deeper water.

One of my mama cows, the one with the two-day-old baby, decides that her young one should move closer to mama. She emits a low, barely audible “h-n-n-n-n,” and the calf moves closer.

The light has grown more now. No more vague shadows – one sees clearly all that there is to see here. The frog chorus is beginning to decline, but the birds are making up for them and more. You don’t see them so much, but they are heard! It is a beautiful sound.

On the eastern horizon the pink glow has grown to a deep rosy red. I know that the “emerald ring” of the sun’s appearance isn’t far away. I can see clearly the blades of grass, the patterns of duckweed on the pond, the bark of the tree beside me.

It all just now went through such a magical little transition. And it does it every day – every morning.

I’m glad that this morning, for once, I didn’t miss it.

The lake below – placid, tranquil,

when nothing is but the pregnant day.

Far down the lake, the hoarse croakings

of a whooping crane, rising to the occasion,

Then, all about my cabin, the little guys

Pretty little singers in their dozens, all

around me in the trees here above,

A’growl comes the motor sound around the point,

Then there he is, there he goes in his boat,

Then more boats, their motorsounds an

integral part of the natural whole –