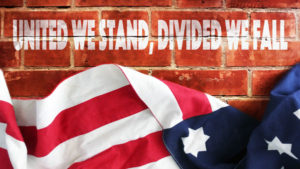 UNDERSTANDING HOW WE GOT THIS FAR DOWN (while distracted)

Patriotism; Religion; Abortion; Gun control; LGBTQ; Immigration; Money as free speech; Corporations as faux people; Globalization as “inevitable”; the oft-repeated lie that all government is bad when in fact only government has the power to save us, and WE are the government.   Republican Party strategists who in fact agree with progressive positions on many of these issues nevertheless use them to distract and divert one-issue voters their way. Democratic strategists who spend their time obsessing over these issues simply miss the boat.

*AVOID pickpocket distractions that pull voter attention away from basic economic issues. Hot-button issues, on which most minds are made up, only divide us against each other. They can be addressed AFTER progressives have taken back the Congress and White House.

*TAKE BOLD INITIATIVE – LEAD.  Never again simply react to Republican initiatives. Look where forty years of non-cohesive reacting has taken us. Let’s Get Our Act TOGETHER

*SOLICIT VOTES of all Americans who agree with our New Ideal Democratic Agenda.

THE NEW IDEAL DEMOCRATIC AGENDA FOR THE COMMON GOOD:

WATCHWORDS:     Repeat these underlined words at every possible opportunity:

The Specifics of Interest

NEW OPTION: Enact into law a LIVING INCOME floor for every American citizen.

3)  Medicare expansion to cover every American citizen through life; and

Action: Tax reform: Outlaw all sales taxes, they rob the poor whose total income gets taxed

Action: Ban multi-national corporations (loyalty to USA is a precondition of selling here)

Action: Ban US corporations that moved offshore to avoid paying their fair taxes

Action:  Place every monopoly under control of a government (federal, state or local).

Action:  Limit corporate growth to maximum 5% of US market for whatever they sell.

Action:  Subdivide any corporation that grows to control more than 5% of the US market.  (First priority:  Abolish and subdivide every too-big-to-fail corporation)

Action:  TEACH: US businesses’ first duty is to SERVE THE U.S. COMMON GOOD by competing to provide the durable goods and services that are truly needed by American citizens. Selling in world markets henceforth has no priority unless and until the living needs of all American citizens are first ensured.

Action: Repair and modernize our aging national infrastructure, including massive new government investment in renewable energy to supply 100% of US energy needs.

Action: Pay Americans to manufacture all needs of our own US marketplace.  Ban the import of every product Americans are capable of manufacturing ourselves for our own US household needs (e.g., pots and pans; shoes; steel; computers; all of it)

Action: Redefine “profit” as “surplus” to be reinvested in the co-op and workers’ pay

A FEW SAMPLES FROM THE ENDLESS LIST OF SMARTER NEW OPTIONS:

Action: Limit all banks to checking, saving and lending. Outlaw money manipulations that produce nothing of value to anyone other than sterile profits to the manipulators.

Action: Mandate all federal agencies to eliminate the need for welfare and labor unions

Action: Mandate a $100 fine for failing to register and vote in any federal election.

Action: Mandate the federal government to nationalize all (meaning all) basic research.

One thought on “CITIZENS RE-UNITED: The Grand Democratic Revolution of 2018-2020”