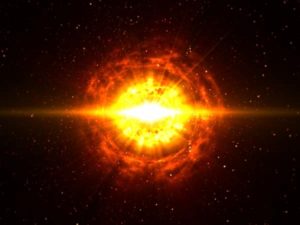 Let us thank God for the big bang.  Yes.

from primeval plasma-photon-proton-atomgas to galaxy clusters, AND stardust biologia

which subsequently, with such evident AND determined striving, have evolved Far

since that Singular Bang some thirteen-point-eight billion earth-years past,

so that rather than Nothing there might be Something whereby to exhibit,

as if Algorithmically, clever Self-Organization into endless forms most beautiful,

as if purposefully, while emerging ever Upward, a perfectly obvious de facto ever-higher

Becoming into ever more complex complexities including, among other interesting things,

ourSelves with a capital S, the seemingly most complex component of All-That-Is,

at least around here,

not to mention this delightful culinary repast

Let us not thank EITHER Mother Church OR  Father Science.  No.

Mother Church would Let There Be Big-Bang’s-Light six whole thousand years ago,

a Hallowed Doctrine scribed at the time OR soon after by The Very Hand of God,

could ever be tested on their ability to overwhelm reason with faith,

to Not-Question that everything – Every Thing – is preordained

by God – thus displacing their free will with humble obedience

to Mother Church.  Well, so much for “intelligent” design.  No.

Father Science would tout His Great Method which, because of its demonstrably

unprecedented success in revealing True Knowledge over these very recent

with internet with tweets by twits, all Empowered By Electricity

while natural resources get converted to pollutants

in the air, the ground, the oceans, fouling the world, Us, our children, their DNA,

while exponential overpopulation blithely overbreeds itself to self extinction,

while Father Science with hubris, with overweening self assuredness, is

certain with Absolute Certainty that Nothing Preceded The Big Bang

– it just happened, a coincidence as they say, to be Not-Questioned –

so Don’t Ask about non-locality OR where quarks come from, Nitwit,

be instead wholly assured by the perfectly obvious fact that everything

– Every Thing – flows with four-square inevitability from “initial conditions,”

thus displacing the free will of every living creature with…small n nothing.  No.

No AND No AND nuts to all these Either-Or predestinarians of left-right-center-and-fringe.

Life is more meaningful than that, and more fun.  The ANDs have it. Open mindsets. Yes!

So let us thank God for the real big bang, AND Be Grateful for this day AND this food.

Postscript:  Free, take one. After hearing this page a time or two they’ll probably stop asking you to pray before eating.