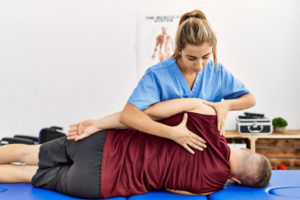 Life moves on and so did I, as a young married adult, to earn a bachelor’s degree in the college town of Richmond, Kentucky. Richmond had chiropractors, but I obtained my chiropractic care during those three years from a courtly old gentleman whose practice was fifty miles to the west in Lawrenceburg. I don’t recall how I got started with him, but Ward Stauffer, D.C., would leave lasting influences on my life. He gave Grostic adjustments, which makes me suspect I learned of him by referral from Dr. Mory. As a poor though not starving student, I could afford to drive to his office perhaps four times a year. In between I tried to safeguard my neck. Dr. Stauffer, quietly devout and committed to serving his fellow man, charged just two dollars (yes, $2) for an office visit, a fraction of his peers’ fees even in those days. I am certain he resides today in paradise.

From him I learned a further thing or two about chiropractic treatments. Grostic notwithstanding, Dr. Stauffer thought it good sense to also do standard Palmer adjustments up and down the backs of his patients—largely farmers and other roughnecks who rendered themselves out-of-adjustment with great frequency. As I lay stripped to the waist on his adjustment table he would proceed up my spine, probing with two fingers between every pair of vertebrae, advising Tell me everywhere it feels sore. Every time I pronounced a sore spot he marked it with a soft-lead pencil on my bare back. Then he’d go back and adjust every one of them. His methodology made a ton of common sense—and it worked, because I always left his office feeling absolutely terrific.

He wrapped up each session with me on my side receiving a normal Grostic neck adjustment. Ward Stauffer demonstrated to me the practical value of not being dogmatic when flexibility is the wiser option. Vince Lambert and Bertha Mory were both dedicated Grostic practitioners who rarely did anything other than neck adjustments. Dr. Stauffer was a practical man who responded to the felt needs of his country clientele—i.e., if their complaint involved the back, well then adjust the back’s sore spots before administering the Grostic final touch to atlas or axis. Among other things I learned from this dear man was the knowledge that an out-of-place vertebra usually is accompanied by a giveaway sore spot. Useful knowledge, that, especially when I want my wife to push on my back in between my regular chiro visits. I have taught her exactly how to do it right.

Educated and prepared, I found my way to the U.S. Civil Service in our nation’s capital, where I would grow professionally for ten significant years before returning home to Kentucky. The experience left me convinced that no state or local government, and certainly no mere corporation, can remotely approach the exceedingly high quality of professionalism that is de rigueur in federal agency staffs. The unknowing citizen who calls them “bean counters” simply has no idea of the intellectual demands our federal bureaucrats routinely handle—their critics are the true dummies.

One of my first tasks after moving to big DC was to find a new chiropractor. I found one who would do. Palmer all the way, he was disdainful of Grostic which he thought too narrow, possibly deluded. I said nothing. He also was a bit rough with his neck adjustments, given his rather slight body build. After a year or two I casually asked him who he used as his own chiropractor…in case I ever needed care while he was on vacation. The next guy was of heavier build and also totally Palmer, but he helped get me through my ten years in DC. Both of their names escape me. Some people leave bigger impressions than others.

By coincidence, return to Kentucky landed me in Lawrenceburg—where I was happy with the chiropractic care I received from Dr. Stauffer for the next fifteen years. He grew older, still delivering adjustments to a sizeable clientele well into his seventies, and I don’t think he ever raised his fee above five dollars per visit. For a life of service to his fellow man, bless his memory.

In 1988 life moved my residence to Frankfort, our state’s capital city, and once again I must seek out a new chiropractor. After some experimentation with the available options, I settled on Dr. Kurt Adams, a big-framed young fellow of constant good cheer who definitely can move bones smoothly on the first try. He didn’t do Grostic—which after all those years of experience I did not consider a demerit. But he was real good on conventional adjustments to the neck, the back—and the pelvis, which all my other chiros mostly never bothered with. His flexibility in going off routine to add other unique adjustments when needful, such as a rib joint or shoulder blade, made me aware of how narrow had been the adjustment routines of some others I had used over the years.

It was a good marriage. Today, thirty-four years later, Kurt Adams, DC, is not only my dependable chiropractor, he is my dear friend. I have few friends like him. For one thing he keeps my aged body in good adjustment, which my other friends cannot do (chiros nowadays call it fixing “subluxations,” but I know “out-of-adjustment” when I feel it). And that’s worth a lot, but that’s not all. He can ably hang in there with me whether I want to talk about quantum physics, metaphysics, or the chancy evolution of Homo sapiens, which most of the others also cannot do.

In fact, he pauses his exceedingly learned palaver only long enough to squint and concentrate while he‘s adjusting. Every routine visit to my chiropractor thus is an intellectual interlude, a treat. He usually administers only a single adjustment to my back after several seconds of discerning palpation, but he’s real good on keeping my pelvis squared, my spinal column perpendicular to it, and his occipital lifts are divine. I have perceived that, within the trade, he’s also a pretty fair politician, quietly accomplishing considerably more than his patients are aware of. In my extensive life experience through a whole raft of chiropractors, there’s not many who can match all that.

The way to start wrapping this up, I think, is to summarize my perceptions on “health care” arrived at over eight-point-five decades of intimate experience with life on planet Earth including deeper-than-most contact with the chiropractic profession. Based on a lifetime of observing the evidence, I am convinced that each of us is personally responsible for our own health. It is original sin to just ramble through life abusing one’s body with lackadaisical devil-may-care and then expect some healer to fix it after we’ve irresponsibly allowed it to go to pot. A few rules apply—or should.

Our health depends first and foremost on what we eat—call it a healthy diet consisting of lots of vegetables and fruits, judiciously selected for daily variety of fiber, protein and minerals. Add to that some modest portions of fish and chicken, but no red meats or their derivative products. And then, after age sixty, incorporate some blood-analyzed food supplements when our aging body starts losing its younger efficiency at exploiting nutrients from the food we put into it. And don’t forget, an afternoon toddy may be a true pleasure but it does not provide any nutrition.

Second is exercise. If you lay around long enough your body will grow weak, then prematurely old, then it will quit. At every age, keep pushing—so long as it doesn’t hurt. Motion is life.

Fully equal in importance to both the above is keeping one’s spine in proper alignment, so that the back-and-forth flow of life energy between brain and cells is not impeded, at least not for long. When energy flow is impeded by a subluxation of one or more vertebrae pressing on sections of the spinal cord, inhibiting life energy to wherever they go, go see your chiropractor. If five adjustments don’t fix things, look around till you find a “better” chiropractor whose personal style of adjustments is just right for your particular spine. Chiropractors are unique just like the rest of us, you know—they all have their quirks and their individual adjusting styles, and the perfect chiropractor for you may not be the right one for me. Shop around. Results are self evident.