Chapter 16: How to guarantee your comfortable retirement income 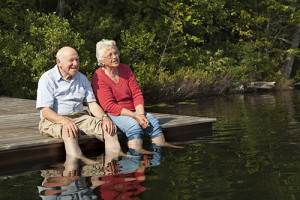 Plain English for the Voting Citizen: 1) All co-op employees will be under Social Security and will receive dependable defined benefits when they retire. 2) Social Security benefits are a privilege, not a right. 3) People so very rich they clearly don’t need any Social Security retirement money won’t get any;  and poor retirees, even if they haven’t paid much into Social Security, will receive enough monthly benefits to buy at least the basic necessities of life which are Economic Rights guaranteed to every citizen of the USA. 4) We Americans are all going to help take care of each other, sensibly, according to our differing needs.

The Congressional blather version:                Every employee of every co-op established as a result of this Act shall, without exception, participate in the federal Social Security System, a “defined benefits” plan, in accordance with the prevailing rules and provisions for participation in, payments to, and post-retirement predefined benefits from the Social Security system by workers and their dependents throughout the United States, as provided in law. Every working citizen shall be taxed to sustain the Social Security Trust Fund as a patriotic contribution to the common good of the nation and assured financial security of their fellow citizens, whereas receipt of any payment from the Trust Fund shall be a privilege where personal financial need exists and not a right where financial need does not exist, as follows.

Plain English for the Voting Citizen: 1) Retirement schemes that depend on the stock market’s ups and downs, such as IRAs and 401Ks, are abolished because they don’t guarantee you’ll get a thin dime when you retire – every time the stock market goes bad these retirement schemes lose big bucks. 2) Social Security is back in the saddle again to guarantee your retirement will be financially secure. 3) All the big bucks the speculators have been siphoning away into speculative IRAs and 401Ks are now going back into the Social Security Trust Fund to make it bigger and richer than ever, so you’ll stop hearing this made-up baloney about how Social Security is going to go broke – and may the greedy bastards who hatched the siphoning schemes in the first place so they’d have more riches to gamble with in their damned unreliable stock market choke on their own gas.

The Congressional blather version:        Upon passage of this Act into law all so-called “defined contribution” retirement plans, such as but not limited to Individual Retirement Accounts (IRA) and so-called 401K plans, which, because of their dependence on the known vaguaries of the speculation-prone stock market, and which – pay attention now – offer the holder no guarantee whatsoever that the retirement income earned thereby will be sufficient to pay for basic food, clothing and shelter much less all Economic Rights when the investment is eventually paid out during retirement years, are hereby abolished and good riddance.

Upon implementation of this Act, and to help ensure that every holder of an IRA or 401K account(s) can depend on the security of Social Security’s guaranteed predefined retirement benefits in monthly amounts adequate to pay for Economic Rights after the holder has retired, the cash value of all “defined contribution” plans owned by United States citizens shall be deposited into the Social Security Trust Fund as a one-time credit to each citizen of the full dollar value the employee has consistently paid into the defined contribution plan(s) to that point in time without regard to whether the plan has gained or lost value due to stock market devaluation resulting from economic crash, bubble collapse or other downturns caused by the endless machinations of financial speculators.

Where a corporation is to be subdivided under the five percent (5%) rule and the new subdivisions reconstituted into co-ops, these Social Security deposits shall be the initial action taken in the series of actions involved in the conversion immediately after the corporation’s aggregate dollar value has been determined. If the current cash value so deposited is less than the documented actual cash value an employee has paid into the defined contribution plan, and if the decline in cash value resulted from the market crash of 2007-08, then the new employing co-ops, and all other employers, respectively, shall make up the difference with monthly deposits to the Social Security Trust Fund as a budgeted cost item over the ensuing five years. The Social Security Act is hereby amended to accommodate this great influx of new income which it would have received in the first place had not IRAs and 401Ks been created to subvert large amounts of money away from Social Security and into the stock market’s speculative gambling.

Plain English for the Voting Citizen: 1) Every co-op will establish for every one of its employees a Guaranteed Income Retirement Account (GIRA) with pre-defined retirement benefits. 2) The GIRA will supplement Social security, and every working employee will always know the combined total amount s/he’ll get paid every month when s/he retires. 3) If an employee moves from one co-op to another, his/her vested retirement money will move with him/her. There are some interesting details you might want to check in the blather version below.

The Congressional blather version:        Every co-op established as a result of this Act shall, at its inception, establish a “defined benefit” retirement plan, into which every co-op employee shall be required to make monthly retirement contributions, matched by the employing co-op, and the plan shall guarantee to each employee a dollar amount, calculable at all times, of the monthly income the employee shall receive from the plan upon retiring after a defined full career with the co-op. The accumulating combination of each employee’s monthly contributions and the employer co-op’s matching monthly contributions shall be known as the employee’s Guaranteed Income Retirement Account (GIRA). The GIRA shall constitute a supplement to the employee’s Social Security System entitlement, such that the combined total monthly income each employee will eventually receive from both Social Security and GIRA during the employee’s retirement years shall be sufficient to pay for the Economic Rights defined in this Act, plus, as determined by each co-op, not less than ten percent (10%) extra to cover unforeseeable contingencies and a little fun, as adjusted for cost of living in the particular U.S. region and subregion where the employee’s pre-retirement co-op employer is located. Any co-op, by two-thirds vote of its employees, may elect to set its GIRA higher than the ten percent (10%) minimum. Retirees who elect to leave a lower-cost home region and move to Florida, L.A. or other higher cost-of-living areas shall do so at their own financial risk.

Plain English for the Voting Citizen: 1) Every co-op will set aside all retirement moneys into a secure account that a) draws interest from a local credit union or bank where it’s deposited, and b) guarantees these private retirement funds can actually be paid out as promised. 2) The local credit union or bank can turn over these monies as loans to local folks so the money stays in the community. 3) Congress wants to impress upon all American citizens that we’re all in this together, that we are all responsible to each other for our mutual wellbeing, that we are not mere dog-eat-dog selfish individualists going it alone as if men were islands that never touch each other, and that the generosity we as a national people showed following World War II defines our nation far better than the self-centered individualism exhibited since 1980 in mindless greedy pursuit of unfettered capitalistic monetary wealth. There’s more below if you’ll bother to read it.

The Congressional blather version:        Every co-op shall maintain a Cooperative Retirement Trust Fund (CRTF) containing the Guaranteed Income Retirement Accounts (GIRAs) of all employees employed by the co-op. After setting aside sufficient CRTF moneys to cover the cost of monthly income payments to current co-op retirees, a co-op may deposit up to ninety five percent (95%) of the remaining CRTF moneys in an interest-bearing account(s) with a local co-op bank(s) and/or credit union(s) for use in making personal loans to community residents and startup loans to community business enterprises, subject to regulatory conditions specified in this Act. Retirement-benefit provisions in this Act may be freely adopted by any state, local and municipal government in the United States.

With these four measures it is the express intent of Congress: 1) to impress upon all United States citizens that we’re all in this together, that we are all mutually responsible to each other for our mutual wellbeing, that we are not mere dog-eat-dog selfish individualists going it alone as if men were islands, and that the generosity we as a national people showed following World War II defines our nation far better than the self-centered individualism exhibited over more recent decades in mindless pursuit of unfettered capitalistic monetary wealth; 2) to end the abuses which have jeopardized and undermined so many of the nation’s contractual defined-benefit pension systems through deliberate underfunding, neglect and subterfuge both political and corporate; 3) to ensure to virtually all Americans over the long term the secure and guaranteed defined benefits of the Social Security System owned by all of us; 4) to greatly augment the long-term viability of the Social Security Trust Fund by transferring back into it large amounts of funds heretofore nefariously siphoned away for investment in the risk-prone stock market; 5) to immediately halt the calculated diversion of invested funds from defined-benefit pension systems to the vaguaries, speculative risks and cyclic downturns of the stock market; and 6) to comprehensively prepare for the impending decline in the ratio of youthful U.S. workers to retirees; all this to the benefit of the common good of the nation and its aging population, and of equal treatment and opportunity for all U.S. citizens.