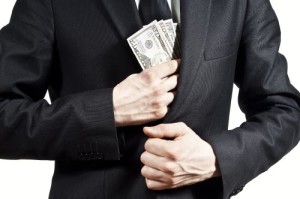 In Verizon v. Trinko (2004) Justice Antonin Scalia called charging monopoly prices“an important element of the free-market system,” and said that it must be protected “to safeguard the incentive to innovate.”  … It’s important to not believe that our current pathological capitalism is the only kind you can have.  We can have a version of capitalism that’s not this concentrated.

The Congressional blather version:        The United States Constitution stating verbatim as follows: “…and he [meaning the male-gender President] shall nominate, and by and with the Advice and Consent of the Senate, shall appoint…Judges of the supreme Court…”, and in absolute furtherance of the letter, spirit and unarguable intent thereof, it is hereby enacted into law that upon a Supreme Court justice’s permanent departure from the court, by death, choice or circumstance, he [the male President] shall within thirty days of said departure nominate a successor and the Senate shall within the following ninety (90) days render its advice and consent for his [the male President’s] appointment of that nominee, provided however, if the Senate default on its advice and consent duty by the close of the ninety (90) days, that nominee shall, by default and without further ado, become and be the presidentially appointed replacement for the departed justice in accordance with the Constitution’s specific stipulation of his [the male President’s] appointing powers.

Nothing in the Constitution or in this Section or in any other law shall be construed as binding on a female-gender President, regarding the powers of whom the Constitution is now and has ever been silent, and a female President may at her [the female president’s] option appoint a replacement justice to any Court vacancy without reference to Senate advice, consent, default, failure to act, abdication of duty, temper tantrum, floor fit, or any other in extremis sort of reactionary Senatorial behavior.

Every sitting justice of the Supreme Court shall retire no later than his or her attainment of the age of seventy five (75) years, and the President shall thereupon nominate and appoint a successor as herein specified. An odd number of Supreme Court justices shall be maintained to ensure the Court’s ability to at all times avoid hung decisions. If any unforeseen circumstance of multiple simultaneous Court vacancies should chance to arise and bollix up this tie breaking ability, he or she [the President] shall immediately end that circumstance with multiple nominations, even if this necessity result in more than nine (9) justices, provided that he or she [the President] shall ensure that the resulting total number of justices shall be an odd number and that referring to this action as packing the Court shall be a misdemeanor punishable by one day of observation in Gambling School, and the Senate shall respond expeditiously to him or her [the President] in compliance with its Constitutional duty as specified in this Section.

Plain English for the Voting Citizen: 1) All elections in the USA will be publicly funded and that one simple little change will fix a lot of problems. 2) Anyone caught trying to go back to the old way of slipping in big bucks to buy an election is going to be in deep doo-doo, count on it. 3) Every (every) election in the USA will produce a paper trail that enables a recount in case it comes to that, because digits vanish into the ether.

The Congressional blather version:         Elections being the foundation of democratic self government, all elections in the United States shall be publicly funded. The cost of conducting federal elections shall be allocated within the federal budget, and the cost of state and local elections shall be paid from state or local budgets as determined by the respective states. Anticipating the usual uninformed grousing, the Congress notes herewith that the U.S. budget now having virtually reached four (4) trillion dollars ($4,000,000,000,000) annually, compared to which the amount of one billion dollars ($1,000,000,000) represents less than a mere three hundredths of one percent (0.03%) of the federal budget, and since one billion dollars ($1,000,000,000) far exceeds the total costs of any election, publicly funding every election in the United States is not a big deal monetarily.

Using or attempting to use private dollars beyond the modest contributions permitted by this Act to control the outcome of any election at any level of government in the United States, including the usual pre-voting campaigns of issues and candidates for presidents, governors and local dog catchers, is hereby declared to constitute a de facto conflict of private special interests vis-à-vis the public interest, therefore is intrinsically antithetical to American democracy and accordingly is hereby declared a felony punishable by ten (10) years in Gambling School. As a safeguard for democracy, the ability to hand count, and recount, a failsafe paper trail for every vote in every election, regardless of any and all uses of voting machines with mechanical or electronic counting capabilities, is hereby mandated for every federal, state and local election conducted in the United States.

Plain English for the Voting Citizen: 1) Lobbying is now defined for the first time and some reasonable limits are put on it. 2) For the eight thousand (8,000) trade associations that exist mainly to lobby in service to corporate profit-seeking interests instead of the best interests of all Americans, lobbying is now effectively abolished and any violation will be prosecuted as a felony. Read it and weep, vile lobbyists.

Excluding dollars illegally ponied up by a not-yet-abolished corporation or super-rich individual as prohibited by this Act, nothing in this Section shall be construed to infringe or inhibit the absolute right of free speech which may be expressed in the form of written letters, petitions, megarolls of signatures, telegrams, emails, tweets twits or other digital means of conveying free speech sentiments as may be devised, to inhibit a politician’s right to arbitrarily grant a petitioner more than nine (9) minutes speaking time, or to deny a politician the right to schedule less than the fifty three (53) individual citizen petitioners who theoretically could be scheduled for nine (9) minutes each during an eight (8) hour day, or to leave scheduled petitioners in the lurch to go vote in attendance on the business of the nation or other jurisdiction represented by the politician.

Freedom of speech guaranteed by the U.S. Constitution being hereby thus guaranteed in reasonable measure and manner practicable for all concerned, all other forms of personal lobbying heretofore made commonplace by use and tradition, such but assuredly not limited to free meals, free airplane rides, gifts and objects of all manner, Bermuda vacations and getaways, arranged sexual encounters, other clandestine liaisons, and cash-laden briefcases, are hereby abolished and their illegality emphatically reemphasized.

Comparably in context of large organizational lobbying, the existence of nearly eight thousand (8,000) U.S. corporate trade associations being made obsolete and irrelevant by the subdividing and conversion of all corporations to co-ops under this Act, and since the principal reason for creating a trade association in the first place is so that it will lobby in self service to its own profit-seeking interests, as opposed to the common best interests of all the nation’s citizens, such as the American Chemistry Council’s reported $11,364,703 lobbying expenditures in 2014, Congress hereby declares that lobbying by any trade association that chooses to remain in existence, or by any of its representatives, is hereby abolished and such lobbying shall hereafter be a felony. Any politician or normal person convicted of violating or even playing around the edges of the explicit terms of this section, which all members of Congress regard and acknowledge herewith as very serious infringements indeed, shall be sentenced to sixty (60) days in Gambling School.