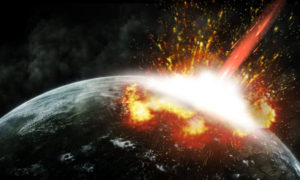 “Something changed” during the past fifty millennia. We don’t know why, but around 50,000 years ago our human culture began to develop and evolve faster than ever before. Like pressing on the accelerator of a car moving five miles an hour, our cultural development accelerated – and we soon became more than we had been before the change. Our accelerated acculturation is noticeable in archeological finds over the first 39,000 years of this period. Then, abruptly, human culture seems to have experienced a great pause – the acceleration suddenly slowed, even stopped – and then took the next 6,000 years to gradually work its way back up to speed. And only then did it usher in written language and the marvelous human history of the most recent 5,000 years.

What an odd, interesting pattern. Let us consider these 50,000 years with some care.

I have previously mentioned a natural division of the past fifty millennia into three segments, the first two being the initial 39,000 years (i.e., 50,000 to 11,000 years ago) followed by another 6,000 years (11,000 to 5,000 years ago). These 45,000 years of prehistory are separated into two parts by a mysterious gap beginning between 12-10,000 years ago. The gap is characterized by sudden and significant reduction in quantity of human artifacts from the archeological record beginning about 11,500 years ago and lasting several thousand years.

The gap is not so much recognized by the archeology community as revealed by the absence of much being said about finds from this period. At around 11,500 years ago the record of dug-up artifacts simply becomes sparse and remains so for about 3,000 years, notably in geographic regions bordering the North Atlantic Ocean. This is not true in the eastern hemisphere where the same period produces significant (though perhaps quantitatively reduced) archeological finds. Around the North Atlantic the archeological record begins picking up again around 8,500 years ago, and the gap had quite ended by 5,000 years ago when human writing first appeared and human activities began being saved for the historical record.

Today, we imagine late prehistorical times as a mythical boundary-time when lasting folk memories may have been created but nobody knew how to write them down. So far as we know. If anyone wrote anything down in that ancient time just before history began, in any manner that we would call “writing,” not one written word of it survives.

What has survived in spades is oral history, passed down from those old days to us today. Concerning this oral history, we are here interested in two boundaries which demarcate the three periods. The first boundary is at 11,000 years ago, separating the first two time segments (39,000 and 6,000 years). The second boundary separates the last 5,000 during which written language came into vogue. The past 50,000 years thus looks like this:

A strange silence characterizes that intermediary 6,000 years between the 11,000- and 5,000-year boundaries. Those six in-between millennia are something of a great missing link in the collective memory of the human species. We think we know that writing hadn’t yet been invented and so nothing was written down during those 6,000 years. All we have from that long-ago time are the traces of old folk memories, remnants of oral hand-me-downs now mostly so transformed in the retellings as to be indistinguishable from myths – like a children’s gossip game passed down through 550 generations. Of related interest, the archeological findings from those particular 6,000 years are sparse indeed – especially in the landmasses surrounding the north and central Atlantic Ocean.

Why is that? What happened around that time boundary 11,000 years ago?

To qualify for exploring this particular prehistorical question, we must devote two paragraphs to the space rocks that can and do enter earth’s atmosphere every single day. The overwhelming majority burn up in the high atmosphere and are sometimes seen at night as “shooting stars.” A very few big ones get past that, roar in and explode not so far above the ground – e.g., Tunguska and Chelyabinsk. Fewer still make it all the way to the ground and pound depressions into the dirt. Four types commonly mentioned by the experts are:  meteorites, meteors, meteoroids, and asteroids. All four are basically rock, unlike comets which are mostly ice and space dust.

Definitions of these four, especially as to their size, have not been well attended. Some astronomers work hard to install uniform definitions, but most of the world and even many of their colleagues have not caught up. You will run across these four terms used interchangeably – thus wrongly – just everywhere. That you may rise above that, here are the best “size” definitions currently available – which is not to imply that many experts agree. Notice that the definitions too are not a hundred percent self consistent:

Modern research and computer simulations indicate that asteroids as big as the 1908 strike which devastated the Tunguska region have hit the earth about 350 times during the past 10,000 years – which averages to one about every twenty-eight years. While a space rock the size of the Tunguska asteroid (180 feet, fifty megatons) is sufficient to obliterate any of our largest cities, surface geology provides ample proof that much larger asteroids have struck earth many times in the past.

But we’ve been measuring things in mere feet. Abundant evidence in and surrounding the Atlantic Ocean indicates that an asteroid more than six miles in diameter once struck an area just east of the mid-Atlantic rift on a line extending between Portugal and Newfoundland. Today the Azores sit there, a paradisaical mid-Atlantic island archipelago consisting of the mountainous tops of huge volcanos built up from the deep ocean floor.

The date of the strike has been placed at 8,498 BCE, just half a millennium short of 11,000 years ago. Let us note that the interior volume of an asteroid six miles in diameter, if it were perfectly sperical, is 128 cubic miles of solid rock. Approaching on a thirty-degree trajectory at 9-12 miles per second (which is 32,000 to 43,000 miles per hour), atmospheric friction heated this 128-cubic-mile rock to an estimated 36,000 degrees Fahrenheit and luminosity perhaps a hundred times brighter than the sun. As the super-heated six-mile behemoth approached the surface it began disintegrating, its huge fragments spreading apart.

To its great misfortune, a large island then situated in that part of the Atlantic happened to be directly under the asteroid’s path at that moment. Like a double-barreled shotgun fired point blank into a watermelon, multiple asteroid fragments far bigger than mountains smashed into the surface at an average 38,000 miles an hour at multiple points across the island. The collective explosive force of their impact has been calculated at the equivalent of 30,000 closely packed hydrogen bombs detonated all at once – roughly five million times greater than the Tunguska asteroid explosion. The island, though large, was instantly and completely demolished as inconceivable momentum carried the gigantic space rocks down, down through the earth’s crust and deep on into the magma of the underlying mantle far beneath the ocean floor.

And Hell was unleashed. Several major consequences began within seconds.

Earth has three component layers: heavy-metal core, magma-filled mantle, and a thin (20-30 miles) crust the surface of which we live upon. Even thinner under the oceans, the sub-ocean crust generally ranges three to ten miles thickness and is thus easily pierced by massively exploding space rocks. The mantle then goes down another 1,800 miles, to the core. In most of the mantle the top few hundred miles are generally brittle and semi-hardened, unlike the depths which are highly plastic hot magma.

But the mantle is soft, not brittle, near the mid-Atlantic rift. There, two of the earth’s great tectonic plates are pulling apart – rearranging yet again the arrangement of the continents, a perpetually changing giant jigsaw puzzle. There, the slow-but-steady separating of the European plate from the North American plate creates the mid-Atlantic rift, an open wound running full length north-south down the ocean’s center, hot melted rock close underneath. In Iceland there are places where one can stand with a foot on each side of the rift’s northern reaches. Near the mid-Atlantic, on a line between Portugal and Newfoundland where the great island once lay, fiercely hot magma lies close beneath the rift.

Into the thin crust just east of the rift plunged the massive rocks from space, smashing out gigantic cavities miles deep, vaporizing everything in their path as they bored into the earth. As cubic miles of packed fragments crowded in behind, blocking release, those gases quickly became enormously compressed, perforating and infusing the jumble of pulverized surface rock and mantle lava, making it spongy. Violently squeezed within seconds to conditions defying description, the catastrophe intruding beneath the ocean’s floor immediately triggered other catastrophes.

Magma instantly heated to thousands of degrees burst out and mixed with the Atlantic waters, creating superheated steam and setting the stage for other violence. Every volcano in the region erupted even as dozens of new volcanoes burst into being, adding fast-increasing volumes to the chaotic rapidly-expanding lava-water slurry. Gaseous chain-reaction explosions tore open the mid-Atlantic rift to north and south so that it soon gaped wider from Puerto Rico to Iceland, releasing still more lava. Hundreds of cubic miles of the hot magma reached out and co-mingled with the cold ocean waters.

Contact with water quick-cooled the overheated gas-infused lava, turning it to sponge-like ash of several varieties all shooting upward at supersonic speeds. The lighter portions known as fly ash were blasted to the upper atmosphere, there to be carried far away by high altitude winds. Storms generated by the strike carried heavier fly ash particles away from the site while larger gas-bubbled chunks known as scoria fell back to float on the ocean’s surface. In this mother of all catastrophes so very much lava was converted to ash and carried away from the impact site that a depression over two miles deep soon formed on the ocean floor where formerly a large island had risen higher than the ocean surface.

The sheer quantity of lava blasted, volcanically released and otherwise dispersed from the area which became that great depression on the ocean floor has been realistically calculated at a volume ranging from 360,000 to 480,000 cubic miles. Total quantity of all the involved solids (both earth and asteroid) in combination with ocean water and gases has been estimated at 4,800,000 cubic miles. 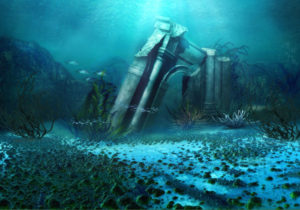 Today, nearly eleven thousand years later, the quiet ocean floor around the impact area displays nothing more than an unexplained flattening and broadening of the ridge areas which define each edge of the mid-Atlantic rift. This anomalous broadening is not thought mysterious, merely coincidental, by skeptics who do not believe a six-mile-wide asteroid once struck there. They do not believe the persistent deluvian folk memories of peoples everywhere around the earth. Admitting such things can happen, their mindsets just don’t think it did happen. The scientific skeptics tend to reject the evidence on grounds that all myths must be thought to have no basis in reality – anyway, they’re not scientific. Religious skeptics of the more fundamental bent tend to reject the evidence on grounds that it fails to agree with the Bible, which plainly shows earth history only goes back to the Creation at October 23, 4004 BC as famously calculated by Bishop Ussher – anyway, the Bible mentions Noah, not asteroids. How dare you argue with such mindsets?

They reject as primitive superstition the world’s oldest myth handed down from near prehistory – the misty memory of a devastating great flood which was felt everywhere around the world and nearly wiped out humankind.  The skeptics do not believe any evidence supports the idea that the new volcanoes created by that terrible asteroid strike grew tall, eventually broke through the ocean’s surface, turned green and lush, and today form the beautiful mountainous islands called the Azores – the sole remaining remnants of the great island which all Mediterranean peoples knew and knew well…eleven thousand years ago.

Anyway, what is this “evidence” of which you speak?