THE PARABLES:  Adventures of the Prodigal Son 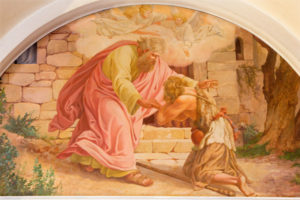 [scene is viewed in complete silence for several seconds]

Dear Rosita, you are beautiful,

Do you care for me, do you understand how my heart aches?

What did I do to fall so low?

Dear Rosita, I remember when I stood at the head of the line;

So sure then, the world was mine,

How did it go so swiftly, I love you

Rosita, how can I go on,

Through my tears and pain no word of disdain

will you utter, Rosita,

because you’re only a pig.

An elegant dining room suggestive of a banquet.  Rich Neighbor paces, evidencing last-minute jitters.  Servant enters … turns to face R.N. with resigned air of one who must deliver bad news.

Everything is ready, Sir, the table is set,

The first three courses are ready to go,

The wines are all the very best that money can get,

Get the hors d’oeuvres and the bread and…

[repeats}  …and I don’t think the guests are gonna show…

This dinner was planned three months in advance!

Now the table is ready and where are the guests?!

Explain, explain, while you still have the chance!

The Van Sneeds telephoned a moment ago

to say they’re sorry and they want you to know

there’s an awful good reason why they can’t come:

…and they must go try it out.

But what of the others?  Why aren’t they here?

The Lumpterbilts will be unable to appear,

They just bought a limo at a bargain rate,

So they took it for a long, long drive.

May they and their limo never arrive!

Young Feiffer just got married to his second wife

And they seem to be having their initial strife,

So they must stay home to repair the nest…

[volume and tempo build with anger]

What a crummy bunch of copouts,

Canceling out at the very last minute,

What do they care if we’re already in it?!

Nuts to them all and good riddance!!

But what’ll I do with the table, Sir?

It’s just a bit much for the two of us.

I have an idea for sweet revenge,

With very little bother or fuss.

Get yourself out and drive around,

And pick up every bum in sight,

Drunkards and riffraff, peons and trash,

And promise them all one hell of a night!

[warms to his theme]

Go get that hippie who lives with the pigs

(but perfume him before you let him in),

Say there’s more food than they all can eat,

With gallons of free wine and gin!   HURRY!!

… of the society page … and his photographer …

two new people: one carries camera, the other a prominent notebook;

[Animated pantomime as he explains the scheme, pointing about as Editor scribbles]

Welcome, everybody, just grab yourself a seat,

And dig right in for all you can eat;

[all hands fall to with gusto – except Prodigal, who holds back]

help yourselves to the food and drink!

[aside, significantly}  There’s a lot more here than you think!

I am so hungry, for weeks I haven’t had a decent meal;

Why are you doing this, this is too much, this can’t be real!

Where else can a spread like this be found?!

Life is hard and the world is cold,

You don’t get nothin’ free;

Why the photographer?  What’s your game?

I believe you’re using me!!

BARMAID   [impatient with him]

How can you be so suspicious in the presence of a sirloin steak?

Mind your manners and hold your tongue,

That may be all right for you,  but that is not the way for me!

I will not be used like this!  They demean us, can’t you see?!

What do you know of pride?

Do you think you can know what I feel?

[all others notice the argument in progress, one by one they stop to gape]

I hate this place!  I will not stay!

In my home the servants eat from a table better than this,

My home is my father’s home,

A far better place than this.

Then why aren’t you there instead of here?

I could be if I wanted!

Why don’t you go then, you prodigal!

You need somebody, because you’re not man enough to go it alone,

I don’t need any of you!

[Prodigal dashes out, hands to head;  Barmaid hurls taunt after him]

Go back to your noble station!

[Strong one-measure INTRO for THOSE WHO LOVE ME]

I am hungry, forsaken and alone;

I hurt so many ways inside;

I can sink no lower now,

But I will keep my scrap of pride.

I could have had the very best

By lucky chance where I was born,

Now I exist by counting pigs,

And feeding them their corn … and I must share their corn.

[SPOKEN with quiet intensity and affection; swings arm from bucket as if feeding corn]

[Two-chord phrase continues through most of the following dialogue]

[moment of silence while he swings arm, dispersing corn from bucket]

[suddenly to himself, increasingly animated]

Am I losing my mind? … Look at me!  Frantic because of a dumb lost pig!

…  No concern for the others – just the one that got lost …

Oh, what happened to my values??!!

What an end to my beautiful world trip!

I took so much for granted!

Why, I’m no better than these pigs!

I brought myself here!  …  just like one more lost pig …

You held a place for me … but I brought shame on you!

My shred of pride is gone, I am wretched and alone;

How would he greet me, would my father greet me?

My shred of pride is gone, I am so weary and alone;

How will he greet me, will my father greet me?

I have a ray of hope, maybe I will yet learn how to cope,

I may yet learn how to live, when to take and when to give,

Truly life is meant for the living,

And living is more than just the here and now;

True happiness is what you make it,

But first you’ve gotta learn how!

I will find my separate peace, from this mental bondage find release,

I am going home to those who love me,

I will find my beautiful world!!

slowly toward him – then stops, tense and silent.  Father eventually looks up, does a dramatic double take, leaps up, runs across stage and embraces him.

[INTRO to HE IS FOUND]

Call in all the relatives, prepare a celebration,

Father, I am no longer worthy to be called your son,

I have reached the lowest level, I have nothing left,

I have brought shame upon your name …

My son, my heart is bursting, let the past be done and gone,

You were lost and now you’re found,

You were dead, now you’re alive,

FATHER AND ALL  [except Prodigal]

Call in everybody and prepare a celebration,

Father, I have no expectations, will you let me stay?

I only ask forgiveness and a chance to rebuild

Forgiving is not needed, you have made my life complete;

Bring new clothes for my son,

Put a ring upon his hand,

And new shoes upon his feet,

[beautiful new robe and slippers are brought and put on Prodigal]

[unison; hold back some volume]

for all time to be,   Prodigal, Prodigal you’re free!

1,  PRODIGAL SON               A young man.  He maintains throughout a bearing and mannerisms that reflect his well-to-do upbringing.  From first to final scenes his clothing steadily degenerates to rags, his hairstyle and appearance become increasingly brutish.

4-7.  FOUR PARTY GIRLS       Young, pretty, full of themselves, tittery, vampish.  They come across as shallow, good-time partygoers ready to serve any handsome male.

ACT ONE, Scene 1                  Set 1.  Yard outside the home of Prodigal’s wealthy father.    House exterior in background conveys wealth.  Father and Older Brother work on timber with draw knife and rasp.

CAST   in order of appearance

Guests at The Great Supper

PARABLES USED IN THIS OPERETTA:

Therefore speak I to them in parables: because seeing they see not;

and hearing they hear not, neither do they understand.