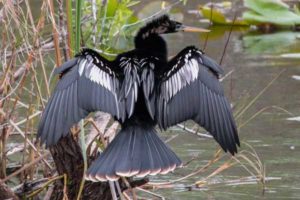 There is more. Imagine now a second board lying on the ground between us. This time it’s me who picks up my end of this other board and holds it at waist level. The board’s other end remains on the ground beside your toe. The two boards you and I are now holding form a big elongated “X.” On that first board we dealt with complexity and consciousness. Now, on this second board, our subject shall be “instinct.” And—sticklers always for defining our terms—how shall we define instinct?

Instinct can be defined as innate unlearned knowledge of what to do and when and how to do it. Instinct is a natural or inherent aptitude, impulse, or capacity, a largely inheritable and generally unalterable tendency of an organism to make a specific and often complex response to environmental stimuli, without involving reason or thought. Instinctive behavior is mediated by reactions below the conscious level.

Some people believe (in the religious sense of belief) that all non-human animals behave by instinct alone and have no capacity to think. Such people, being quite wrong of course, are especially concentrated in the academic field of psychology, particularly under the grievously obsolete subset called “behaviorists.” No matter their behavior, our purpose here again is to illustrate an interesting correlation. This time it’s an inverse correlation:

The human mind, being of high consciousness and hence more able to think, reason and choose, has far less need for instinctual knowledge of how to survive and reproduce. Some instinct certainly remains within us (witness the strong human sex drive), but we no longer “just know” instinctively how to build our homes, as do the beaver and spider and red-tailed hawk without having to much think about it. At the opposite (lower) end of our continuum board instinct is everything—it is that inner urge which tells the simple lowly creature to eat, avoid danger, reproduce—for it has almost no conscious mind, certainly not enough to reason, think or choose in any cogent way you might notice.

And in between the ends of that sloping board—emerging, rising up the ascending continuum of consciousness—lies a great deal more animal kingdom conscious awareness, intelligent thinking and common sense than may ever be understood by the insensitive lab director who believes lab animals don’t feel pain or suffer, “unaware.” The sloping board represents emerging consciousness as a rising capacity to love—from the least of humble creatures all the way up to full human potential.

Lowly barnacles, for instance, may be cemented in place, but what they lose in mobility they retain in complexity. Being hermaphroditic, they have ovaries near the base end and testes behind the head. To mate with far lovers, a barnacle consciously casts its sperm into the ocean’s flow where downstream barnacles may sense it and, consciously choosing to act as females, use it to fertilize their own eggs. The sea turtle consciously lays its eggs on the beach…and leaves. Barnacles and turtle have done their duty in response to their instinctive biological urge to survive and reproduce.

The mammal mother—pick any non-human species you like—births its babies, then consciously licks them, feeds them, protects them, and in all ways acts as if she loves them. Some species let the babes hang around the rest of their lives—members of the pride or group—while other mothers consciously drive the grown babes away when it’s time to mate again. They show the urge and the beginnings of yearning. Homo sapiens are the only species in which we can objectively observe the yearning and say the species definitely has the capacity to love unconditionally, to rise, upward, and to consciously love all others as unconditionally as it is reliably reported that God loves every one of us.

Observations of unconditional love have been reliably reported in several actual cases.

Why would a little collection of pieces of energy, manifesting as matter, display self organization and reproduction that is capable of continuity? Why would it display evidence that it has an urge to assure continued ability to reproduce by doing so exponentially? Perhaps we really should ask the most basic question of all:

Why does there exist this condition called “alive”?

If there is an answer we’re not ready for it yet. Sadly, we cannot yet with any assurance say why life exists, we can only guess. I call this sad, because we want to know. At least some do. Why is it that we feel driven by this desire, this yearning, to know?

Seeking a reason for why there is anything alive, addressing the “why” of the question requires that we address purpose. This is something many scientists are averse to doing. Why and purpose are inextricably conjoined. If a big bang “just happened,” for no reason, then there could be no such thing as purpose. But, being a normal human, you are compelled to ask “Why would such a colossal thing just happen for no reason? That simply doesn’t make sense.” And indeed, how could you not ask? The big bang and life are conjoined by unceasing evolution from that first banged-out instant of Creation, and here you are, alive within it, a product of it all. Isn’t that amazing!

If either the big bang or life had an original purpose, then certainly both could have because they are the one-two parts of a continuum. And how in all common sense could such momentous situations as a big bang, then life, come into existence for no reason? Human minds, perhaps functioning in “the image of God,” have not evolved to avoid such questions. Such questions are what inspire young people to go into science. That so many scientists go out of their way to avoid such questions seems exquisitely artificial, contrived, mindsets determined to remain closed to the most important questions of all.

To not wonder, to not ask why, is simply abnormal for our species. Asking why is the underpinnings of all science. This particular curiosity in its sophistication seems to set us apart from other species—but “seems” means only so far as our minds permit. Why is it that our mindsets presume that dolphins and dogs and elephants and gray parrots don’t wonder why too, each in its own way…? I always watch our dogs attentively, and many times it has been utterly clear, and I have known beyond doubt, when they are curious about something because they show it so obviously. Sometimes their little minds wonder what, other times they wonder why. I have watched Lily stand absolutely still for long moments, poised on the rocks beside our little front pond—her head cocked slightly sideways as dogs always do when wondering—gazing intently into the water, watching the little water-things swim about. To me, the real question is how anybody could shut such undeniable observational evidence out. But they can and do—just like those who say Well, God can’t possibly exist, so let’s not even consider such a silly question.

If, contrary to scientific orthodoxy, we venture to hypothesize that there is or may be a purpose for which life exists, then there is no option—we are compelled to consider “who” would have established that purpose. Purpose cannot exist without a living “who” behind it. And that who might be God—or whatever S/He is called in your language. I truly do not understand how those so certain that God cannot exist can steadfastly refuse to consider purpose, the obvious human yearning—the why—for which all things including life exist in the universe.

Their abdication is also the reason conglomerative religion eagerly rushes right in and can’t be stopped from claiming the territory. Scientists proclaim “it’s not our bailiwick,” religionists proclaim “it’s exclusively our bailiwick.” You’d think they could find some common ground on that basis at least, but… out come the swords and scimitars, crescents and crosses. Onward Christian soldiers, marching as to war. Allahu akbar. Not to mention that self-contradictory oxymoron behind so much suffering: “holy war.” God help us.

If we discern purpose in our universe, in our lives, the existence of a purpose maker implicitly follows. Science is deterred by its closed mindset that there can be no such thing as scientifically acceptable evidence for the existence of a Purpose Maker, who might—god forbid—be called God, or something. Religion is not so deterred and dogmatically cares not a whit about what science, most reasonably, calls evidence.

I think science and religion and their mutually closed mindsets both have much to learn. But I decline to let myself feel a pox on both their houses because so many of them are good, honest, caring, sensible people, trying to do good, many my beloved friends. In refusing to even speculate on why life exists, the refuser evidences a closed mindset which has already decided there cannot be a purpose, nor can there be evidence of purpose, therefore there cannot be a God who would make a purpose. Or, more directly:  There is no god, therefore there can be no purpose and no evidence of it, case dismissed.

Contrariwise, in order to say (or even speculate on) why life exists, you have to stick your neck out. Do it. Assert that 1) purpose apparently does exist (life in fact arises, emerges, out of non-life), and 2) there is evidence of it (universe and life do in fact demonstrate self-organizing upward emergence toward increasing complexity). Therefore, 3) some entity could exist to have established that purpose. If you’ve gone this far, it’s a very small step to calling that entity God, or Hilda, or whoever you like to call it. Ergo God apparently exists. It all depends on your mindset—whether you dismiss the question, or are willing to commit to a hypothesis, even if not a position, on the question of “why.”

We have not settled this question of why so it will keep returning, as it must. Meanwhile, notice this:  Scientists do—and constantly do—ask the why question on multitudes of intriguing other topics every day. It is the driving motivation of scientific inquiry. Now why would a supernova do that? It’s only in a certain few areas that they claim the why question is not their bailiwick. And—mark this—an open mindset on this particular Big Question would be in no way subservient to the dogmatic beliefs and doctrines or closed mindsets of any established religion. As I have just demonstrated, anyone can provisionally conclude God exists, or probably exists, or at least might exist, on the basis of scientific evidence (big bang, immaterial energy forms) and logical reasoning. And logical reasoning, as we’ve noticed, most certainly is definable as an image of God.