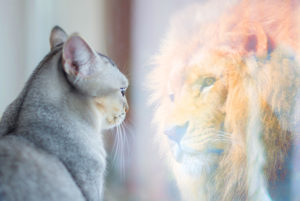 If a given living thing produced only one more of itself, and that one produced but one more, which in turn produced one more and so on, life would be but one single line highly prone to chances of getting stopped—killed. Hence living reproduction must involve producing more than one in most generations, in order to improve the odds of a generation surviving in case a particular descendant does not survive. Aliveness is very much about the odds of a living thing surviving at least until it has reproduced itself into—usually—two or more additional living things.

And that “more”—i.e., more than one—is an essential, indispensable aspect of surviving. One must reproduce more than one. Then each of those produces at least two; then each of those… and so on, like rabbits and duckweed. Some to waste, so to speak. Many are the species that depend for their species survival on a strategy of producing many thousands, even millions, of offspring—milkweeds are an example—in hope that some small percentage will survive to carry on a continuum of their kind, notwithstanding staggering losses of a vast majority which will die without reproducing.

Given that the very first living entity(s) almost certainly reproduced by simply dividing in two, we cannot know when this two-or-more urge began; we can only be certain that the resulting two halves felt a natural urge to divide again, and then there were four, then eight… In any case the effect of evolution over long eons was the same. Descendants eventually evolved—and evolved and evolved—until at last they reproduced by other means, such as sexual union. Some of the less complex species missed out on the brief bliss of orgasms and still to this day do it the old original way, by simple division.

Why do they/we have these urges, these carings, to 1) survive (eat, avoid danger) long enough to 2) reproduce? I think this Why is the most important question in all biology.

From observing life-as-it-is, we have inferred that being alive means exhibiting certain traits: 1) urge to survive, 2) urge to reproduce and generate offspring, which self organize according to a parental template, and 3) do so exponentially. Regardless whether the “organism” (as we’ll call the critter now that it’s alive) is a single celled bacterium or a multi-celled, vastly complex flower, reptile or mammal, it must have these characteristics in order to be distinguished from non-living things like rock crystals and planets, even if those non-living things are self organized. The simplest living virus is far more complex than mighty non-living Saturn with all its rings and moons, more complex than the Milky Way galaxy, more complex than any non-living structure in the whole universe. Too dumb to write these words, a lowly virus has far more complexity than all those great celestial structures. As the virus evolved, we may say, it has risen, and is now more.

There are some incidental details. In order to live long enough to reproduce, life consumes energy and converts the leftovers to byproducts. But eating and pooping are more concerned with the organism’s urge to live long enough to reproduce than with the fact of reproduction which sets life apart from non-life. And in any case, how is far less interesting than why it has this urge. Another thing:  when living organisms reproduce, each “child” generation is almost exactly like the template of its parent generation—except for the minute differences that give us all different faces. You didn’t know bugs and birds all have different faces just like dogs and people?…shame… Just remember:  In all this wide universe, no two things are exactly identical.

Those minute changes always occur, and changes slowly accumulate as each new generation grows successively more distant from the grandparents and earlier ancestors. After thousands of generations, with thousands of tiny modifications slowly accumulating, a descendant organism may look, and actually be, quite different than its original ancestor. A popular example is a herd of sheep, the two halves of which get separated into two valleys with mountains between;  after a few hundred generations there are two species of sheep, and they don’t even look like each other anymore. Such slowly evolving speciation explains the way in which life separates itself into very different things, like worms and loons and fishes, so we can have waters that swarm with swarms of living creatures, as the writer of Genesis had plainly observed. Evolution is continuous in both categories, the non-living universe and living creatures, but speciation is the way in which evolution works its special magic in the living things category.

The primal urge and the yearning

Two more characteristics, so far unmentioned, must now be added to the definition of life. I call them the urge and the yearning, and though they may seem similar, they are two distinctly different things. “The urge,” integral with life’s first two imperatives, is a way of summing both survival and reproduction into one word. All in all this wholly physical property is primal clear back to first life. Deeply woven into this primal urge are a related variety of purposeful behaviors we call “instinct.”

“The yearning” is something else altogether. Yearning is a force that doesn’t come into effect until a species has evolved high enough in consciousness for its members to conceive something higher than themselves, and then—consciously or unconsciously—yearn to be with, or to become, that higher something. All in all it is a spiritual thing. The presence of it is evidence that a species’ emergence has crossed a very important threshold—it has entered into new territory between life delimited by the urge and a uniquely higher concern that signifies spiritual growth. If you watch for it you will see the yearning evidenced in the behaviors of most humans and in individuals of several other mammal species. Yearning by the great apes and dogs, for example, are easily viewed by humans, though ocean mammals may similarly yearn—how would we know?

The urge is integrally concerned with all things survivalist and reproductive. Each living thing will try to survive and reproduce itself unless mortally damaged or behaviorally changed by a recessive gene(s). Defensive reflexes demonstrate the survival urge and sexual passion demonstrates the reproductive urge. The first living thing, being “somehow” already organized, handed its “pattern” down to its descendants, and they each in turn passed the same pattern (or slightly modified versions) on to theirs. From its first moment of existence, every living entity exhibits an urge to survive, to stay alive. The survival urge manifests in two ways: avoid danger and attain energy. How did these motives—for motives they are—arise in that first “alive” molecule? Stack the question alongside Where did the big bang come from?

Danger is typically avoided by moving away from the danger, assuming the entity can move, or by various other devices (often involving stinky chemical defenses) if it cannot move. To survive and stay alive the living organism attains energy by eating whatever nutritious sustenance is available in its accessible environment. Such sustenance may variously be sunlight, minerals in the dirt, mother’s milk or oysters on the half shell, but if a living entity doesn’t eat in whatever way it does so, it soon starves and its aliveness ceases. Each living entity seems to “know” this by virtue of the fact that it seeks to eat shortly after being produced (i.e., coming into existence; being born; germinating; hatching; whatever way it happens to begin). Such built-in “knowing,” without any schooling at all, we call “instinct”—another mystery. What is instinct, really?

Newborn mammals “just know” to seek a milk-filled nipple. Having found it they “just know” to suck. Baby ocean turtles emerge from their shells and immediately rush for the safety of the surf where the gulls can’t eat them. Salmon “just know” when it’s time to go home—back up the long rivers, up over the falls, to that faraway pool of borning so they can perform their reproduction ritual, and die. How do they know? Baby birds “just know” when it’s time to jump from the nest on faith that they can fly. My little dog Max “just knows” that when he smells an alien dog’s scent in his yard, it is necessary—his duty—to hike his leg and cover up that stranger’s insult with his own my-yard notice. Max cannot not do this, every time—why must he obey this imperative instinctual urge?

In any case, all living organisms eventually reach a point where the urge to survive diminishes, fades, and then is gone. This point is not normally reached until sometime after the organism has reproduced at least once. Sometime after one or more reproductive events—sooner or later, as various species lifetimes go—the organism dies. In this terminal stage, those earth minerals that had somehow by some means unknown organized themselves into one or more complex molecules with interdependent organs, as a body possessed of built-in instinctive urges to survive and reproduce, become wholly dispossessed of such urges and simultaneously fall apart—becoming dis-organized back down to the original mineral components, such that both the body is no more, and the animating life, even if it continues without the body, is physically evident no more.

The why of how this all happens is itself something of a mystery. Get born, survive and reproduce, then die—what’s the point?

The Yearning. Regardless whether life began once or many times, there is no point thereafter at which aliveness does not already exist on the earth. Every descendant inherits its parent’s pattern, right down to you and me. Life began, continued, and of its own accord it persisted. It persisted as if it wanted to. This yearning is another mystery. To what purpose do living things want to survive and reproduce—what’s the point of it? Bringing the question closer to home, why do each and every one of us bother to get out of the bed every morning? Why do we do anything at all? The question is right up there with Why is there something rather than nothing? What is this yearning that drives us?

We picked up some prospective answers in the chapter on near-death experiences. We shall return to this question a couple of chapters farther down.