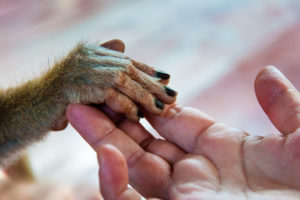 You may think of everything pre-Cambrian—the full three billion years of it—as evolving from that first simple alive molecule up to its proud achievement:  a slightly complex bacterium that by now lived pretty much all over the earth. So far so good. Then we reach the Cambrian period itself, 55 million years when things got more interesting.

Hard shells represented a significant milestone in evolution’s relentless upward directionality. These organisms apparently accumulated mutational changes that enabled extraction of mineral ions from seawater—and then, through biochemical processes acquired by more slow mutations, secreted those minerals through one’s outer skin to form calcite or silica shells into the shape of a DNA template received from one’s parents. All this being an energetically costly process, there must also have evolved ways to that bring in extra energy for the body’s use. The earliest shell creatures had only tiny bits of hard shell embedded in their outer skin. After millions of years of evolution some of these had morphed into the trilobites, those first flexibly encased creatures that show up so ubiquitously in rock fossils everywhere on earth. Trilobites were around for 300 million years, from about 550 to 250 million years ago—a thousand times longer than Homo sapiens has been on earth. Will we do as well? What do you think?

Trilobites were among the earliest members of a group we call arthropods. Other aquatic arthropods include barnacles and horseshoe crabs, and a whole sub-family of crustaceans that includes the lobsters, crabs and shrimps. Varieties of arthropods are many indeed, with extreme adaptability enabling them to occupy virtually every habitat in the oceans. They not only reproduce quickly, their generations multiply in astonishing numbers—or will, until their habitat becomes too polluted by human waste and acidic chemical runoff.

Nor are they all aquatic. Land-based members include all the insects, the spiders and scorpions, and the vast sub-branches of all of these. Constituting the earth’s largest phylum of animals, arthropods are more than 85 percent of the roughly million and a half animal species that we know of, and counting. By contrast, our own phylum of vertebrates and notochords includes less than 45,000 species, over half of which are fish and but a few thousand are mammals. Sadly, current scientific news informs that insects are in drastic decline—possibly up to three-fourths of them—all over the earth. They think maybe human pollution might be the culprit.

As the Cambrian period of life’s history progressed, the rate at which life forms mutated and diversified increased, speeded up, then became exponential. Evolving creatures were not only emerging upward, they were diversifying sideways as well. Things evolved alongside other things, all evolving off in different directions, like many-twigged branches spreading out hemispherically from a main-trunk center seen from above. Many of them interacted with many others so that, overall, everything alive actually or potentially interacted with everything else—all influencing each others’ evolution.

And they all begat quite well. Mutations multiplied. New, more complex and wondrously different descendants emerged—and so today we have oysters, clams and scallops, not to mention snails, abalones, cuttlefish and the beautifully complex chambered nautilus. It feels so sad that vast quantities of manmade carbon dioxide are being absorbed into all the world’s oceans, raising their acidity, making it increasingly difficult for all these wonderful arthropodic shellfish to form their little shells. The bodily processes they inherited, and have used these several hundred million years, are being quickly overwhelmed—in like unto an instant, after all this long time—by seawater made increasingly acidic by carbon dioxide dissolving into it from our cars, trucks, ships, planes, smokestacks, now our ocean mining—all making carbonic acid. Scientific data leave no doubt that the shells of these, our important relatives, already are becoming on average thinner. Scientists of course differ in their estimates on how soon shellfish will fail and go extinct—whether it will happen by this mid-century, or perhaps a bit later.

Vertebrates too originated during this Cambrian celebration of life diversity. The ancestors of every creature that today has a backbone, even some Congressmen, were launched—probably in shallow waters close to shore. Scientists believe that the earliest ones were Myllokunmingia and Haikouichthys ercaicunensis—no doubt you’ve heard of them. By the time Cambrian evolution had finished its work of speciation, the vertebrates had evolved into five emergent groups, those being in order:  fishes, amphibians, reptiles, birds, and then mammals. We take particular interest in the latter of these, as—with deep regret that we cannot take time here to tell all their wondrous stories—we once again fast-forward, this time into the post-Cambrian phase of life on earth.

…and the world swarmed with living creatures.

Charles Darwin, On the Origin of Species

God then created the great sea monsters and all living creatures that move and swarm in the waters, according to their kind…and God saw that it was good.

Mammals from beginnings to present

Mammals made their first appearance roughly 200 million years ago. But they didn’t much take off until the competitive threat of carnivorous mammal-eating dinosaurs was removed 65 million years ago, decisively, by a sizeable asteroid that did not pass us by. No more dinosaurs, lucky for us. (Unlucky for us, it would not be the last to not pass by.)

The earliest known mammal with an actual placenta for birthing babies, just like us, was a modest mouse-sized little person called Eomaia. Betwixt wee ancient Eomaia and the modern mammal kingdom, there came millions of evolving in-between species that appeared, disappeared, converged, emerged and speciated prolifically. They finally ended up as all the mammal species that share the earth with us today, so far. I’m so sorry we must skip over all their interesting stories, as they would take far too long to tell. But you can easily find them conveniently sorted and arranged in almost any library, except those of sectarian religions such as Church of Christ and Baptists that officially exclude evolution from their doctrinal beliefs-on-faith. Though so many must be left out, we can still get a pretty good feel for the paths mammalian evolution took, and the incredibly rich diversity they produced, by taking a quick look at modern-day results. So once again we skip, to the modern end of mammal evolution, the interesting end which leads to us.

There are today up to six thousand species of mammals, and they can be categorized into three groups:  the monotremes (mammals that lay eggs, such as the duck-billed platypus), marsupials (that birth the baby prematurely then carry it in a pouch, such as opossums), and placentals which are the largest group. Placental mammals, as I see them, naturally divide into three groups: 1) the wild un-tamable species such as lions and tigers and bears, zebras and warthogs, moles and voles and armadillos oh my; 2) domesticated species such as dogs and cats, plus the cattle, horses, pigs, sheep and goats variously used for farm work, human food, and dog and cat food; and 3) Homo sapiens, which comes in domesticated and wild varieties that, alone among the mammals, savage their own kind.

Evolutionary biologists, however, see placentals in three groups more official than mine:

Higher mammals. …also—I almost forgot—primates, which include, among other things, lemurs, lorises, tarsiers, monkeys, great apes—and us, the summit of evolution. Many are the learned scientists who disagree, and often fiercely, with calling us a “summit” of any evolutionary line, because they don’t believe evolution has any upward direction. I leave that issue to your best judgment after you have first compared yourself to a roach, a pit viper and a Congressman:  I ask, who among the four of you is higher?

Primates.  Skipping over all mammals unfortunate enough to not be prime-ates, the primates are “thought” to have diverged from other mammals about 85 million years ago, though the oldest fossils found so far date to only 55 million years or so. One cannot help but notice that 55 million years ago happens to be, as previously noted, the same time the world was suffering severe global over-warming probably set in motion by massive methane clathrate releases. One cannot help but further wonder at the coincidence that the only early primate fossils found so far happen to date from that particularly hot period.

With over three hundred species (a disputed number, of course), the order Primates is the third-most diverse order of mammals, after rodents and bats. Primates eventually evolved into two main groups, the prosimians and the simians. “Prosimians,” which carry forward characteristics of the earliest now-extinct primates, include the graceful lemurs of Madagascar, plus the lorisoids and big-eyed tarsiers. “Simians” include the monkeys and the hominids. Simians are also called “anthropoids,” which means “resembling a human being”—a visually undeniable trait that religious opponents of the very idea of evolution severely object to, usually in abject unfamiliarity with anything written in this chapter.

Hominids, the highest simians, are all the great apes including us. Some of those same people also object to being classified as a “great ape,” including an appropriate few not great enough to deserve being so called, and so the term hominin was invented to appease them. It changes d to n, as if that solved their basic problem. Confusion over the terms hominid and hominin, which has reigned ever since, is clarified as follows. Hominids (with a d) include, in ascending order of brain-body complexity, modern orangutans, gorillas, chimpanzees, bonobos, and humans, plus all their mutual extinct ancestors. Hominin (with an n) refers to the human species only—i.e., modern humans—plus the several extinct human species and all our mutual Homo ancestors. Still, hominids remain the broader category, and they still include us. Alas, confusion over the d-versus-n distinction remains pandemic and these terms are constantly misused in all contexts.

From this point on our tale proceeds in the taxonomical order of classification invented by the 18th century Swedish scientist Carolus Linnaeus. It can be traced through eight steps of primate begetting, which read quite a bit like the Biblical begats:

As these appear in ascending order of complexity and alleged intelligence, let us probe deeper into the purportedly more highly emerged of the mammal primate hominins.