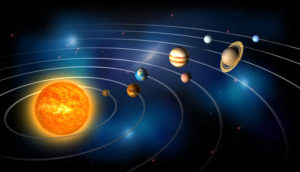 The burning process inside a star has been compared to layers in an onion. The outer layers are supported (in the sense of “held out away from the super-dense core”) by the energetic nuclear reactions at the hot core. When the hydrogen fuel that began the process is used up, helium moves into the core and all other layers collapse a bit inward. The collapse maintains pressure and temperature at the core, sustaining the fiery furnace. Further collapses produce ever new layers of fuel moving inward, one at a time as each layer is slowly consumed. As the process repeats in later-generation stars, burning ever heavier elements as fuel, successive collapses of layer after layer produce still heavier elements in and around the core—until it reaches iron, and there the process ends. As Brian May et al describe it:

“Once a massive star forms a core of iron, nothing can prevent the outer layers from crashing inwards. A dense core quickly forms, and a shock wave rushes through the star, propelling the rest of the material outward in a vast explosion of heat and light—which we see as a supernova.

The dying light of a supernova—a very special type of massive dying-star explosion—outshines the combined light of its entire galaxy, and is visible across the universe. Does not such an extravagant thing seem miracle-like? Old churchmen called them that.

Not all stars explode. Some end up becoming low-mass red giants—i.e., after a lifetime of burning brightly, they run low on fuel, become greatly expanded and, now much cooler, are seen to be red. This will be our own sun’s fate in about 5 billion more years. By contrast, red supergiants are stars much more massive than our sun in which the temperature becomes so hot the heat pressure forces outer layers of the star to be shed and the dying star ends up being surrounded by a beautiful shell of glowing hot gas. When red supergiants eventually do collapse, they leave behind a compact, inert mass of carbon and oxygen that eventually cools to invisibility and is called a white dwarf.

Some massive stars become the aforementioned black holes. These exceptional bodies collapse with such enormous force that exponentially accelerating density and gravity overcome all outward pressure, thereby compressing the remaining matter down into a ball so small and super dense that not even light can escape its ferocious inward pull. Think of a big bang in reverse, though on a much smaller scale. Is not this implosion, and its product, nearly as mysterious as that original explosion which was the big bang?

Almost all stars of any age produce at least some heavier elements during their lifetime, but the majority case is that each succeeding generation of stars, burning material enriched by preceding generations, progresses toward producing ever-heavier elements. Thus the earliest stars produced primarily light elements, while the younger stars, including our sun, mainly produce the somewhat heavier elements. Except for the hydrogen, helium and traces of light elements manufactured in the very early universe, all the elements in the universe today—all that cosmic “gas and dust” of which we so often speak—are the ashes of long dead stars.

On Earth, we know them as the air we breathe (nitrogen, oxygen, hydrogen as water vapor, argon, and carbon as carbon dioxide), the iron we mine to make cars and heavy stuff (at least the non-plastic parts these days), and the carbon fossil fuels we unearth and burn as oil, coal and “natural” gas. The latter residue of ancient life fueled our industrial revolution, and now fuels its post-industrial aftermath, while unfortunately also fueling global warming that may well take down this post-industrial aftermath in a collapse of human civilization as I have previously mentioned.

Nearly fourteen billion years after the big bang, this process continues, stars burning up the elemental products of previous stars and producing newer, heavier elements which they disperse in final death explosions. After all this, hydrogen still remains by far the most plentiful element in the universe. Fortune and eternal fame await the man, woman or teen prodigy who figures a way to efficiently convert our essentially infinite hydrogen supply to a permanent energy replacement for polluting, Earth-destroying fossil fuels. We do know that hydrogen burns, don’t we, as our sun is up there doing this very minute.

All these elements taken together, lightest to heaviest, constitute the Periodic Table of the Elements seen in every high school science room. The Periodic Table should be of interest to us all. Google one up and look art it. Notice the dietary supplements among the heavier elements, such as iron, copper, selenium, some of which you may be taking as pills. Manufacturing them happened in exploding stars—and then eventually they found their way to your grocery shelf in little bottles. Perhaps you have a gold filling, or own a hammer made of iron forged into steel. Our old early-history ancestors long ago figured out how to melt copper and tin together to forge a harder alloy called bronze, and so our human history includes a “Bronze Age.” It was displaced by the Iron Age—iron was harder and so, very useful, the cutting edges of killing instruments stayed sharp longer.

The Periodic Table of the Elements is a star-generated library of parts for building the universe, including our bodies. Stars are the source of most of the universe’s carbon, which we know to be essential for life on this planet. Our Earth-life bodies are literally descendants of the stars, and would not exist if routinely exploding stars and supernovae hadn’t been out there burning, creating light, building elements. We are carbon-based bipeds who breathe oxygen and have iron in our blood. Other bits of star and supernova debris float around in our veins, our brains, in our very cells—the cosmic seeds of life on earth. Truly, in the most literal sense possible, we—at least our bodies—are constructed of stardust…stardust that has been passed through Earth dust, thence into the plants growing from the earth, that our ancestors ate to feed their earth bodies so they could be robust, and breed, and produce descendants.

These are words you can indeed interpret literally. And God sees that it is good, for it presumably was a god—God—who kicked off this whole complex process of self organizing, emerging complexity, using the Godly Algorithm, pursuant to some Godly Purpose we polluting little children of God variously wonder about.

Of stars and planets, Sol and Earth

As we have noted, even as the universe continued expanding outward in all directions, creating its own space as it expanded outward through nothing, nothing at all (most normal people don’t quite get that nothing part), the attractive force of gravity caused great clouds of elemental gas and dust to condense and self organize into galaxies and stars within galaxies. But it didn’t stop there, because gravity is constant. While the new suns were forming, proto-planets were also forming in orbits around the proto-suns.

The star system within which we live went through the same planet-forming process as billions of others, guided only by that magical unexplained force called gravity. It worked. A vast ball of hot gas gradually condensed until it became our sun, Sol, and eight planets—four inner rocky balls and four outer gas giants orbiting a central fireball far bigger than all of them put together. That’s amazing. How did all that proceed?

Imagine our solar system when it was barely beginning. No sun, no planets, only an enormous cloud of elemental gas and dust, light years across, containing a few wrinkle-like perturbations of density, small local remnants left over from the big bang. There was a germinal tendency for the entire cloud to slowly turn, a rotating tendency that would grow as time passed, aided and abetted by the gravity of neighboring protostar clouds in nearby regions of the galaxy. The gas had motion within it too. Atoms moved, collided, some joining to become molecules, others moving on solo. The moving gas/dust throughout the cloud became clumpy, its density not the same everywhere. It was a local variation of the same theme we saw in formation of galaxy clusters, galaxies and stars. Wherever density grew more than somewhere else, its gravity grew stronger apace.

Gravity of course ensured that the largest clump was at the center, so that with its greater gravity the center pulled in vast amounts of the surrounding gas and dust. Eventually the center condensed and grew dense enough to ignite and become our sun. This happened some 4.6 billion years ago—a bit more than nine billion years after the big bang. Thus when two-thirds of the history of the universe (so far) had elapsed, our star was born.

Like all stars, our sun is a huge ball of incandescent gas. As stars go it is unremarkable, very ordinary—that is if you’re not of the turn of mind that admires all stars as miraculous. It has an expected lifetime of about nine billion years, half of which has elapsed so far. Many stars are bigger than ours, and yet Sol, only average in size, could hold within itself more than a million planets the size of earth. Think about that. Its very average surface temperature is about 5,600 degrees Centigrade. A little farther out, the temperature of its corona is around a million degrees. Deep down inside at its core, where the alchemy of elements changing into other elements goes on, temperatures reach 15 million degrees. The sun appears yellow to us because its temperatures, like its size, are intermediate. In comparison with other stars, Betelgeuse appears red because it’s cooler than our sun, Eta Carinae appears blue-white because it is hotter.

But our sun’s “ordinariness” is just one perspective. As the parent body of the solar system, our star is so massive that it contains more than 99 percent of all the matter in the entire system. Yet that remaining tiny one percent fraction was far more than enough to build all the planets, all their respective moons, and all the comets, meteors, rocks and debris now in orbit around the sun. Not unlike those one-in-a-billion particles and antiparticles that survived the great annihilating, a little can go a long way.

While our sun was evolving, at least eight large clumps spaced further out in the cloud were pulling in on themselves too (and that’s not counting all those other clumpings that would become “planetoids” and moons large and small).  These eight grew dense enough that their increasing gravity pulled in the dust and debris surrounding each clump as they all gradually took on roundness—a natural shape when you get big and dense enough. Between any two such rounding clumps, the gas and dust separated (separations again, as in Genesis), some going to one clump, more to the clump in the other direction. As the spaces between them grew slowly emptier, all eight grew more dense, more round, more solid. Planets in utero.