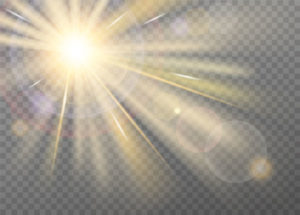 From one-in-a-billion survivors—lucky for us—a whole universe evolved. Strange indeed, but doesn’t it seem amazing? How could those old ancient authors of Genesis possibly make up a story as interestingly fantastic as this? But there’s more.

All the above happened in less than three minutes of the new universe’s birth. Then, right at three minutes post-bang, there began a new epoch in which photons, otherwise known as “light,” would dominate the universe. Let there be light. Moving beyond seconds and minutes, this epoch lasted some 380,000 years, even while many other changes were happening. We can “see” out to this point, where light originated, but beyond that we cannot see any further, out to the “real” edge of the universe, for it remains unlit.

One important change occurred between three and twenty minutes AB (after the bang). When the universe’s temperature had cooled sufficiently that protons and neutrons could finally begin to attach to each other, their marriage formed tiny balls of energy we call nuclei—each of them born with potential to be the central “nucleus” of what would later become atoms. These nuclei were not yet atoms, for they as yet had no electrons around them. They were just free-floating nuclei pregnant with the potential to become atoms. And, they too were still energy, they were not yet “matter.” Everything was Energy.

Seconds to minutes to years. At around 70,000 years AB those tiny irregularities in distribution of the big bang’s residue, as mentioned earlier, began to grow in amplitude. Picture a “wave” that is somehow flowing through a mass of superhot volcanic lava; now add a bunch of these waves, all flowing randomly in different directions. Regions of space that were slightly denser than other regions become a bit more dense, while rarified regions having more empty space became slightly more rarified.

Moving right along, between 300,00 and 380,000 years AB the universe had cooled down to a mere 3,000 degrees—so cold that the free-floating nuclei finally began capturing tiny free-floating specklets of energy (in yet another form) called electrons. When those electrons began encircling nuclei—captured, as it were—the first atoms were born. The first matter. But don’t forget:  though we commonly call it “matter,” all the parts were (and still are today) pure energy. Proton + neutron = nucleus + electron(s) = atom. As soon as these three different energy forms combine themselves into this configuration, known as an atom, we start calling them matter. And in its atom-ic configuration, truth be told, “energy-as-matter” does behave quite differently than does “energy-as-itself-alone.”

Why is this so? Why does energy-as-energy have very different properties when it becomes energy-in-the-form-of-an-atom and starts being called matter? I think this surely is one of the most interesting, most mysterious and intriguing questions in all the world. It has overtones we shall explore in a later chapter dealing with spiritual matters.

So different forms of non-solid energy came together to form “solid” matter at its most basic level, the atom. This process progressed very, very rapidly, and at its completion most of the free-floating protons and neutrons in the universe had become bound up as nuclei inside atoms with encircling electrons. Well, not actually “encircling”—not like planets around a sun. An electron in “orbit” around a nucleus can be conceived as more like an invisible “spherical shell” of energy humming at some distance out from the nucleus. Rather like a transparent world globe surrounding a pea. You can’t say exactly where the globe is, yet it is “everywhere” around the pea. Is that perfectly clear?

Pause and ruminate. The atom is the lowest level at which we define “solid matter.” In other words, energy changes from its particle form into a combined-particles form and thereby just sorta “becomes” matter. Just is. It seems miraculous. If you could look closely at an atom, all you’d see is a lot of empty space with a dot of invisible energy at the center—and, way far out, some equally invisible energetic electron shells all around it. An atom with two electrons has two such shells, one being a little farther out, like nested Russian dolls. Ditto for three electrons, and so on. But all that “empty space” is deceiving. If you hook a bunch of atoms together you get a “molecule,” or even a “compound” that seems quite solid indeed—at least to our human sense of touch. Try walking through a brick wall and discover how very solid atoms can “seem” to be.

The first two types of atoms to come into existence were hydrogen and helium, the first elements. The overwhelming majority were hydrogen atoms (one electron shell). Most of the much smaller remainder was helium (two electron shells). The hydrogen atoms outnumbered the helium atoms roughly ten to one. Hydrogen and helium were created “directly” by the big bang—or at least by the interesting processes which immediately followed the bang. Most other elements would be created much later, inside the atomic furnaces we call stars. And they would be seemingly few, because hydrogen and helium together still to this day constitute 99.9 percent of all matter. That 99.9 percent, along with the remaining one-tenth of one percent which is all other matter, would evolve into the universe as we know it. Once again, what a ratio!—don’t you think that’s amazing?

Before we move on, recall that photons—particles of light—came into existence about three minutes after the big bang. Just before the atom-forming process got underway, the many photons were present in such great numbers that they were in constant collisions with the many free-floating protons and other particles. Collisions were inevitable because everything in the new universe, even while it was beginning its expanding, was still dense and tightly packed. Consequently the universe was rather opaque. Though it had a tad of light glow, it was not light such as could be seen through a telescope. Things were actually pretty “dark.” But then a wondrous thing happened.

The “clearing away” of protons, neutrons and electrons as they collected themselves into atoms progressed so thoroughly that the newly-opened spaces between atoms allowed light’s photons to more freely zip around unimpeded. As a result, the universe became transparent—it let light pass through (which is why we can “see” back to this point in time, but no farther). This lighting-up process is thought to have happened almost instantaneously everywhere across what then passed for the entire universe, and it…

…Let There Be Light. Truly, it must have been the grandest sight of all eternity.

Let us focus a moment on light, because it clearly is an integral part of the story of our unfolding universe. You will recall that scientists speak of little particles (or “packets”) of light as photons.

What exactly is this “photon?” It is light. Or—with the greater precision used by some prominent physicists—it is an “elementary particle” that is associated with light but is commonly said to actually be light. Do you find that greater precision as unenlightening as I do? A photon has no mass (because it is energy, not matter—but then everything is actually energy, not matter). It has no electrical charge, and it always travels at “the speed of light”—an incredible 186,000 miles per second (which is 300,000 kilometers/second). If you take the time to multiply that by the number of seconds in a year, I guarantee you will be impressed by the distance a photon of light can travel in one single earth year.

Whether a photon, so-called, is light, or is simply associated with light, I cannot say. If you’re odd enough to read a dozen or a hundred books on physics, you will notice that scientists of every stripe are exceedingly loosey-goosey in their constant and may I say very inconsistent uses of the word photon. They use it to mean more things, and in more contexts, than seems reasonable. Moreover they change what they mean on different days and in different writings. Moreover yet: “what light is” depends on its energy, which can vary from one instant to the next. According to the noted cosmologist Trinh Xuan Thuan in his book Chaos and Harmony, the particle known as a photon can “be” a gamma ray, an X-ray, ultraviolet light, visible light, infrared light, or a radio photon. At least all that.

And all that is before quantum physics converts it, indeterminately, from a “particle” to a “wave”—but more on that later. Having mentioned quantum physics, did I mention that photons are also called (or equated with) “light quanta?”  Friend, you can look up the multiple meanings of “photon” and “light” and “light quanta” in all the world’s Very Best Reference Sources (VBRS) till the cows come home, and I challenge you to understand the matter clearly at day’s end. I freely confess I do not. I have struggled for a great many years to get clear in my mind just what light is, what a photon is, what light quanta are, and I have failed. I do not understand light. Of small consolation, I’m in good company:

All the fifty years of conscious brooding have brought me no closer to the answer to the question, “What are light quanta?” Of course today every rascal thinks he          knows the answer, but he is deluding himself.