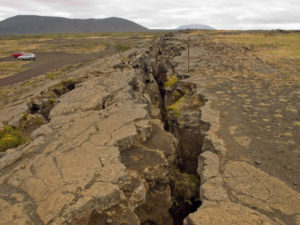 First of all you should know it’s large, it’s long, and trends generally south-southwest to north-northeast. Few people are aware that the ends of the overall fault zone stretch all the way from Mississippi to Indiana. Along the way the zone involves significant parts of Missouri, Arkansas, Tennessee, Kentucky and Illinois. It is named after the pretty little town of New Madrid, Missouri, population 3,000, which carries on the name of the original New Madrid, destroyed in 1811. They pronounce it “New Mad-rid” because anything Spanish grew in disfavor soon after asserted ownership of the ill-defined Louisiana Territory passed with ill feelings from Spain to France.

The U.S. Federal Emergency Management Agency (FEMA)—a new name—predicts that “widespread and catastrophic” damage from a major earthquake originating in the New Madrid-Wabash Valley fault system would reach farther out to parts of Oklahoma, Kansas, Texas and Alabama. The region of highest risk actually involves eleven states, although quakes originating here at mid-continent historically are claimed to have made church bells ring from ground motion as far away as New York and Boston. Without question, an earthquake in the New Madrid seismic zone is a serious geologic event.

The compound New Madrid-Wabash Valley fault zone does not behave like the highly active San Andreas. Its location near the center of the huge North American plate is what geologists call an aulacogen, a place where three great cratons—vast subcontinental chunks of Earth’s rocky crust—got crammed together in geologic ages past, merging into one big new North American plate. Except that they didn’t quite totally merge.

Though cratons are very old and stable parts of earth’s crust, their three-way junction in the North American aulacogen remains a little weaker, a bit less stable, than the formerly three hard-rock platforms that now surround and comprise the junction. Like several other aulacogens scattered around the earth’s continents, this geological structure suggests longer term stability. And it is stable, mostly, with far fewer tremors than are common along the San Andreas fault lines.

However, it also displays more sudden and violent seismic activity when the three gigantic rocks eventually do move relative to each other, beneath the surface, as they inevitably do on a scale of some centuries. Unfortunately, compared to the continent’s-edge San Andreas, we know very little about how the tightly packed but ever-movable cratonic plates actually move here at mid-continent.

What we do know quite well is that New Madrid, just like our overheating climate, is coming due. One of the largest earthquakes in all historical time began on December 16, 1811, when the New Madrid seismic zone produced quakes that are retroactively estimated to have been between Richter scale magnitudes 7 and 8.  Huge. The initial pair of quakes were so massively violent that ground uplift caused the Mississippi River to flow backward for a few hours, capsizing riverboats unfortunately passing by at the time.

The extended hinterland surrounding the village of New Madrid, often called “sparsely settled” in 1811, was in fact populated by at least some hundreds of native Americans and white settlers in 1811. Their awestruck reports are well recorded in many letters and contemporary newspaper accounts easily available with modest inquiry. While a count of how many died in the violence is lacking, many reported the terrifying opening—and closing—of great, deep, ground fissures near their houses in and around New Madrid.

Widespread subsidence of land surface throughout the New Madrid hinterland submerged whole farms and forests into extensive new swamps, permanently changing the landscape of the entire region. The swamps are still there today, though repeated efforts have been made over the years to drain and convert them to farmland—mostly by people unaware that the swamps were farmland in the first place. As the quake subsided and the mighty river resumed its southerly flow, it lay within a substantially altered course. Former great river bends, miles in length, were left isolated as what we now call oxbow lakes.

Two more major shocks followed in early 1812, tumbling chimneys a hundred miles and more distant. The Governor of Louisiana Territory sent the first-ever request for emergency assistance to the federal government in Washington, D.C., establishing thereby one of the enduring purposes of the federal government—savior of last resort—a precedent that has drawn appellants countless times since following natural calamities not half as severe as the Great New Madrid Earthquakes.

We know with great certainty that it will happen again, we just don’t know when. The U.S. Geological Survey projects “7 to 10 percent” likelihood of a major earthquake within the next fifty years (which, note, leaves a 90 to 93 percent likelihood that it will occur at some other time, presumably after the next fifty years). They might be right… and of course they might not. Fifty-fifty odds.

Field work using precise GPS positioning reveals significant movement since 2003 of lands around the fault. These movements indicate new buildup of the subsurface stresses, rock straining against rock, which typically precede earthquakes. The inevitability and unknowable timing of the next great New Madrid quake are the most prominent features of emergency disaster response plans established by the Army Corps of Engineers and major cities throughout this central U.S. region. Earthquake drills are periodically staged in hundreds of hospitals and schools in towns throughout the region.

There is equal certainty that, when it happens, disruption, damage and loss of life in the now heavily populated region will be “catastrophic,” as FEMA says. Memphis is only the nearest city to the zone’s center. Draw a line from Little Rock to Indianapolis;  count the cities and towns within a couple hundred miles of this line through America’s heartland.

As with most scientific topics, what we don’t know about plate tectonics and seismology, especially around aulacogens, is far more than the bit we do know, or know imperfectly, or just think we know—until somebody overturns our old knowledge with next year’s new knowledge, demonstrating most embarrassingly how wrong we were all that time we felt so sure about what we thought we knew. Most distressing of all, we now must face how publicly wrong we were. In terms of closed mindsets which go on denying the reality of global warming as the water rises to their navels, there is no “wrong” antonym for the religion-sullied word “righteous.”  Wrongteous?  An oversight, perhaps, by the people who make words.

As to oversights, how many people ever heard of the Midcontinental Rift System that stretches from Kansas to Minnesota, much less know anything about it? It formed about 750 million years ago when great cratons which would become North America split off from the ancient supercontinent Rodinia (surely you’ve heard of Rodinia?). This more northerly rift system is not overly prone to significant tremors, but who knows what’s going on under there as the great magma plumes do their perpetual lava-lamp recyclings deep in the earth, beneath that large mid-continent rift? A “rift” is, after all, a rift—“a crack, a split, a break in something” says the dictionary.

Googling the matter, one cannot help but notice how the southern end of this Midcontinental Rift zone lays so awfully close by the northern end of the New Madrid-Wabash Valley rift zone, its northernmost arc constituting the northern shore of Lake Superior. How many people do you know who know that? Geologists call this a “failed” rift, which means it didn’t become a zone of major consequence such as the Great Rift Valley in northeast Africa. It does, however, remain a significant “weak spot” in terms of the North American continental plate. And this is of some significance in the larger scheme of things.

The Midcontinental Rift zone lies close by the Great Lakes tectonic zone—yet another sleeper—which stretches from South Dakota to Lake Huron. In this zone, during the past 120 years, a number of earthquakes have occurred in Minnesota, Wisconsin, Michigan’s Upper Peninsula and southern Ontario. Who knew besides the locals? The best documented was a magnitude 4.6 quake epicentered near Morris, Minnesota on July 9, 1975, and felt over some 32,000 square miles in parts of four states. It was not widely publicized, nor were that region’s other recurring small quakes in the years since.

We thus see that an extended subterranean rift zone of varying weakness zigzags in four parts across the North American heartland. From Mississippi it extends northward as the seismically dangerous New Madrid fault zone, continues northward as the Wabash Valley fault zone, then as the Midcontinental Rift System, and finally as the Great Lakes tectonic zone reaching well into southern Canada. Among these, the New Madrid section is certain chaos just waiting to happen—it will come when it comes. The others merely lie close enough nearby to be directly affected when the impending next big New Madrid quake actually arrives.

The earth itself is in need of transformation; we need to learn to adapt to a new earth because the old earth is passing away. Churned out by the collective unconscious, the vision is a map of our global near-death and inner transformation. It is also a response to a life-threatening situation. The species, not just the individual, is on the threshold of near-death. Indeed, all species of life are threatened; hence, catastrophe is pictured in geologic imagery. Person and planet are at risk…”