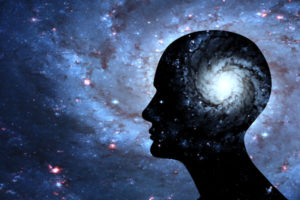 Einstein’s general relativity published in 1915 followed by a decade his special relativity published in 1905. Whereas general relativity dealt with the macro-world, special relativity revealed a micro-world hitherto unknown to all humanity—except for that old Greek theory about an atom. Back to back, the two relativities addressed all reality lying between the smallest known particles, quarks, and the largest structures we know of so far—galaxy superclusters and a vast arc of celestial matter called the Great Wall. Thus we mortals live in two great realms of reality, one large and one small. We directly experience only the large, but the two realms’ very great differences go far beyond size.

At human size, we are just above the atom-sized center point of a dimensional continuum that stretches from the quark on the low end to the outer limits of the universe on the high end. Two vast realms—the micro below the atom, the macro above it. On their relative scales, the tiny micro realm contains infinitely more “things” than the vast macro realm, itself seemingly infinite. Both realms are energy manifesting itself in different ways.

To remind and reinforce, let’s walk up the continuum naming each step as we go. On the micro end, energy manifests at the following sizes beginning with the smallest known particle:  Quark > Proton and Neutron > Electron > other subatomic particles > Nucleus > Atom. There’s the centerline. The macro end begins where two or more atoms bind together to form a > a Molecule, the smallest form of Matter. Now proceeding on up the macro section of the continuum:  > Many Molecules congregated into gas and vapor > powder, sand, gravel, rocks, boulders, and living organisms with bodies at all those sizes from molecule (a virus) to boulder (elephant; whale) > Meteor, comet, asteroid > Moon > Planet > Star > Galaxy > galaxy-size gas Nebula > galaxy Cluster > Supercluster of galaxy clusters > the Great Wall > and The Universe In Its Entirety.

Alas, this beautifully explanatory description misleads. It portrays the  continuum as if it were “two halves” with the atom at the center. Wrong—in reality they are not two, they are one.

Imagine your outstretched left arm to be the micro realm, your right arm the macro. Now bring your arms together, pressing them, as if they could be merged into one blended arm before you. That is reality—we live in both realms at once. The large is called the “classical” realm, the small is the quantum realm, and everything in the quantum is integrally embedded in the classical. The large is made of the small, and the small is energy manifesting in different forms, we don’t know why. Everything, therefore, both small and large is, in reality, energy—“nothing but” energy.

The early twentieth-century discoverers of quantum dynamics recognized full well that the mysteries inherent in their new discovery were as much metaphysics as physics, for those “dynamics” did things that were beyond explanation. They still are. A particle can also be a wave—both at the same time—a wavicle. Two particles can become entangled, each behaving the opposite of its twin, and they remain that way even if traveled light years apart—“Spooky action at a distance,” pronounced Einstein. The empty-empty “nothing” vacuum of intergalactic space is filled with infinite numbers of energetic particles that twinkle into existence only to immediately wink back out a trillionth of a second later;  uncaring of time, some depart before they arrive—leaving us poor logical mortals mystified. Where do they come from, where do they go? What are they doing? Why do they do it? After a century of scientific examination and testing the mystification and questions remain completely, totally, utterly unanswered. The mysteries endure.

Mysteries within us—Energy organizing itself, and emerging

All the foregoing is but introduction to a still bigger mystery. It involves understandings that arise out of new knowledge, learned only in recent decades because advancing modern technology made it possible, and the implications are grander than any topic presented so far. It carries us into a yet broader new realm that, just as a century ago, is recognized to be as much metaphysics as physics—more so in fact, because  this expanded arena of knowledge unavoidably confronts us quite as much with Why as with How. Let us consider the new knowledge that has so fortunately been given to us.

On the quantum scale, energy-as-quarks conjoin themselves together to create energy-as-protons and energy-as-neutrons which, with enormously strong forcefulness, bond themselves tightly together to form the energy-as-nucleus of every energy-as-atom in the universe. If these important little joinings didn’t happen atoms could not exist. These tiny energetic particles and forces just do these things—we don’t know why.

Energy-as-electrons then attach themselves to the energy-as-atomic-nucleuses in extremely flexible ways that produce all the many energy-as-elements in the periodic table—iron, carbon, hydrogen, more than a hundred of them. Radioactive decay caused by the weak force changes some elements into other elements such as energy-as-uranium, energy-as-radium, energy-as-polonium. We have no idea why all these dynamic happenings happen, but if they didn’t happen neither energy-as-water nor energy-as-life nor energy-as-anything else with structure and shape—any shape at all—could ever exist.

Moving to the macro scale, we notice that energy-as-atoms bond themselves together in infinitely flexible ways (we don’t know why), thereby creating the energy-as-ores and minerals and compound substances that enable modern civilization. We do know, and very well indeed, that our civilization is utterly dependent on our continued use of all these many mineral ores and natural substances. We have reached a point in human history where we must exploit the earth’s natural resources or die. Unknowingly, we committed ourselves to this course at least ten thousand years ago, and now the more our oh-so civilized population expands to cover the earth the more intensely we must exploit those natural resources. The need to exploit them directly correlates with the size of the worldwide human population—a correlation obvious to all who pause and think about it.

Obvious but not widely noticed here in the early twenty-first century, most natural resources in and on the earth’s accessible crust are beginning to run out. The easy-to-get-to resources have mostly been dug out. The remaining resources are not only harder to get to, in many cases they are nearly used up or soon will be. What bad luck that so many natural resources should be running out—used up—here at the very time we need them most to sustain our exponentially fast-growing human population and its increasingly middle-class consumer desire to consume things. You’ve heard of the “rare earths,” I presume. If (when) we run out of these rare resources, smart phones and many other modern technological “needs” will become impossible unless substitutes can be invented. But I digress—this topic must await a later chapter, we’re still on mysteries.

It is the macro scale of creation that presents the most amazing mysteries of all. To dispel the suspense, details later, here they are:

1)         The universe is organizing itself into structures of increasing complexity, and has always been doing so ever since the big bang.

2)         This complexity is increasing—emerging—in an upward direction that is progressing from simple to ever more, and more, and more complex.

Pause and ponder. The observable facts—plainly observed by scientists through modern telescopes and by a hundred other ingenious methodologies—leave no doubt at all that the natural force we call gravity causes atoms to clump themselves together and build themselves up into shapes that do things and cause other things to happen. It furthermore is obvious, to any and all curious enough to bother to look and see, that the dynamics of all the structures being constructed by gravity are becoming more complex over time.

In brief:  Complexity is increasing and the increase has upward direction.

You’d think it would be inarguable that an atom, being obviously more complex than a quark, can with complete legitimacy be considered to be just a bit “higher” than a quark. That a molecule, being a combining of two or more atoms, is more complex and thus “higher” than a single atom. That an oak table made of molecules is higher than the molecules of the wood from which it is made. That a virus, being made of at least one extremely complex molecule and considered definable as “alive,” is higher than the non-living molecules that make the oak table. That a one-celled protozoan, unquestionably alive, is higher than a virus. That a complex giraffe is higher than a jellyfish.

That a human brain—being hands down the most extremely complex thing to be found anywhere in the entire universe—is higher than all other things in the universe bar none.

But no, these self-evident truths are in fact argued against, often and quite vociferously, by not a few. Why would something so obvious arouse such disagreement? Well, in all probability it would be because it confronts some mindsets that are very, very closed.

As you were passing through all those preceding pages, did you notice?… This energy that forms itself into other forms which make up everything there is…it seems to know what its doing. Do you think that remarkable?

The idea that energy in the form of structured matter might do dynamical things which seem to be, or can be interpreted as, consciously guiding itself is of course unremarkable if you’re accustomed to thinking that way. But if you’re accustomed to thinking “Well God made it do that,” or “Everything in nature happens by random accidental chance without direction or purpose,” then you might feel a bit affronted by the implication that natural events occur purposefully with neither God nor randomness as the guiding force.

If this book is going to imply—or say outright, as it does—that nature seems to know what its doing, then I’d better have a pretty good case to back up such assertion. And such case had better be undeniably well constructed—for minions of naysayers will be quickly in line to deny it. They will arrive from both the religious and the scientific estates, to stand there in a very long line, together, denying—unto their last breath.

The next two chapters, and some more later, will contribute to building the case that the universe is consciously self organizing and emerging upward, undeniably. We will begin by examining the perspectives, respectively, of religion and science to see what they might have to offer, if anything.