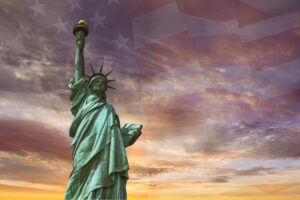 In the thirteen years between 1776 and 1789 we Americans created and placed a new ideal of freedom before the world—the then-radical notion that common people can freely govern themselves, without an overbearing monarch claiming divine right. Many nations would follow our lead with their own versions, but those thirteen years birthed the first truly new political ideal in human history.

Much has changed over our nation’s 246 years, not all of it good. Suppose we were now to place before the world a newer ideal, to counter the unworthy ideas and meanness that have recently sprung up, severely dividing us, threatening our civility, our unity and our very nation. What if we removed some old barriers that preclude even the possibility of equal rights for all of us? We have lots of options.

We could start by fixing the abysmal misunderstanding of “republic” and “democracy.” These two ideas constitute our nation’s very foundation, and arguing whether America is one or the other is wasted energy. It’s not Either-Or, it’s And. A republic is a “structure”—a context within which to live, like a house in which walls define several rooms with names like Legislative, Executive and Judicial. By contrast, democracy is a “method,” a way of living and behaving within context of the whole structure—such as all of us voting equally to decide who will administer each of the rooms. We are both a republic and a democracy, and both parts drastically need some updates.

We could tweak the republic’s structure by eliminating things that prevent or obstruct democratic equality. The Electoral College will be the first to go. With no obligation to endorse the candidate most people voted for, even a landslide popular vote is indifferent to this obscure anti-democratic control device. The Electoral “College” was set in Constitutional concrete by wealthy Founders who mistrusted common voters to uphold economic arrangements that kept those Founders wealthy—such as slavery, and control over wage workers.

The U.S. Senate is next. That bastion of monarch-like elitism gives Wyoming’s half-million citizens 80 times more voting power than California’s 40 million; Vermont, with just over half a million has 60 times the voting power 30 million Texans. Yet all four states have two senators with co-equal voting power. The House of Representatives truly reflects our population but, even if the entire House votes for a bill, a single obstinate senator who cares not squat for democracy can stymie that bill. The Senate, the most undemocratic structure in the USA, distorts the very concept of fair voting. Abolishing it is way overdue. Don’t hesitate—you either believe in democracy or you don’t.

If the arrogance these structures represent seems unworthy of Founding Fathers—not to mention modern gerrymanderers and others who despise equal voting rights—our democratic methods could also use a few tweaks. For example, an unpopular Supreme Court ruling could be overturned if a new Constitutional amendment gave voters the right to call a referendum and a subsequent majority vote disagreed with the Court. The Court’s present God-like last word would pass, rightly, to the people. Another fix would ensure the referendum was unarguably democratic. Exactly like Selective Service registration for military draft duty, every adult American could be required to register for voting duty, and in fact vote in every federal election. A hefty fine would encourage voting by every citizen lacking a valid excuse. Imagine the benefit to our democratic method.

And why not? To counter elitist Founders’ fears of democracy-run-wild by under-educated masses (Madison called them “mobs,” anticipating the January 6th mob), we could expand the Bill of Rights to require adequate education for every citizen. Just as the First Amendment is specific about freedom of speech, press, religion, assembly and petition, our new amendment could specify that age-appropriate curricula in grades 1-12 must include, among other things, comparison of 1) different forms of government, and 2) alternative economic systems including arrangements that don’t now exist. Recognizing the enormous influence of religion in American life, 3) the history and doctrines of all major religions and their evolved subdivisions could be similarly compared to each other, to empathy, and to the golden rule. In every course the paramount priority would be helping children learn how to think.

Our expanded Bill of Rights could put economic rights up there alongside political rights. No person is truly free politically if he/she lacks sufficient income to afford life’s minimum necessities for food, clothing and shelter—plus, in this mobile technological world, the price of adequate health care, dependable transportation, insurance required by law, and adequate retirement income. We Americans should officially acknowledge that the only entity possessing enough power, resources and motivation to ensure these economic rights to every citizen is the federal government we created in 1789—unlike corporations whose sole motivation, forever and always, is profit and monopolistic control without concern for worker wage adequacy or the common good of communities.

Oh yes, we have options—plenty of them. And if our original American ideals seem a bit out of touch with modern wrongs, it’s up to us moderns to make things right. After all, are we any less moral, any less creative, than those old Founding Fathers? In this drastically changed modern world, we now can also count on Reforming Mothers to help make things right and fair—and adequate for every one of us.