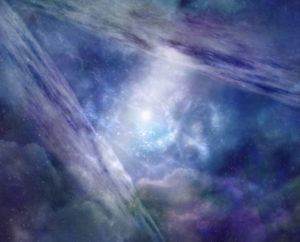 Oh God, Thy sea is so great, and my boat is so small.

In your mind’s eye, that central eye of imagination,

See all of it in time, from The Beginning to Right Now.

That imaginary dot of nothingness where a big bang occurred

In The Beginning of time, when

God created the heavens and the earth, and said

Let There Be Light

And so there was light because

The plasma released in that exploding release of God-energy

In time organized and structured itself,

So that the first-ever space appeared between them

Permitting the first-ever light to shine through them,

And There Was Light.

And the energy-substance of God’s big bang inflated,

Like Fourth of July sky rockets bursting in air,

A vast sphere of universe expanding out out out, creating space

At the speed of light in time,

Accelerating as it went, as we now know;

Spreading the outer boundaries of the Great Sphere

That is our universe

To unimaginable outer bounds known to be, in diameter,

See in your mind’s imaginative third eye this colossal realm

Released by the hand of God, released of God-Self,

To be ever changing, ever increasing in complexity,

Ever rising, becoming ever higher, ever More,

In all of its grand celestial manifestations

As particles, dust, galaxies, each with stars, and planets and comets,

Many with Life, intrinsically made of the God-energy

That God sent here in the big bang,

In its immensity, all thirteen point eight billion light years of it—so far.

In its immensity, see it all, all, in your mind’s Godly eye.

Our whole universe is about the size of a tennis ball.

Naught but a wee sphere, sitting there,

A nondescript small universe-sphere sitting there within the real sphere

That surrounds it, the truly Big Sphere, the one that’s truly

In this reality of spherical surround,

That little tennis ball we see as our vast universe

Sits within the truly big sphere,

The Realm of God,

And God watches patiently for Rising on our small sphere,

That universe which contains even this small plant Earth

Orbiting within its star-sun-galaxy somewhere within the tennis ball,

For Emergence, for all its little creatures to Rise,

As indeed they are doing, every day of their precious little lives.

God watches too for its most highly evolved creatures

To yearn toward their greater Emergence,

And in their turn,

Each duty bound in their turn, then,

To bring their small gains Home.