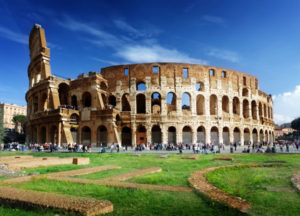 According to highly suspect sources, Rome was founded on April 21 in the year 753 BCE by the twin brothers Romulus and Remus who as infants had been, according to even more suspect sources, suckled by a she-wolf. Mythology says the two were grandsons of the Latin king Numitor through whom they were descended from prince Aeneas of the Greek city of Troy. Rome thus had a Greek connection from the start, though its early peoples were called Latins after the Plains of Latium in west-central Italy. The twin boys mythically were conceived when the god Mars visited their mother, the vestal virgin Rhea Silvia, in a sacred grove as gods and virgins have long been known to visit. They led long and adventure-filled lives until Romulus one day murdered his brother Remus on some silly mythical pretext very much like the silly motive for which Cain slew Abel some centuries earlier. The twins and she-wolf – but not Rhea Silvia who did all the real work and greatly outperformed the she-wolf – live on today as symbols of modern Rome. I don’t think that’s fair.

The idea most worth remembering here is that Rome lasted in all a thousand years during which it arose, became a mighty empire, declined and fell – a record unequaled by any other polity. Look at the Soviets: not even one century. The vast empire that Rome became for a while, over all the countries it turned into colonies, is today but a memory like all the other heady colonialists who strutted a while on history’s fickle stage – but none as long as Rome. In its heyday Rome ruled much of the then-known “western world” surrounding the Mediterranean Sea, though never so much as legend ascribes to it. Despite its fall, Rome’s many after-effects have enormously influenced all humanity living in the planet’s western hemisphere from that time right down to the present day.

Highlights of the Roman Millennium

The village that grew to become Rome went through five stages during its millennium.

1) Originally ruled by strong men who were later called “kings,” 2) the kings were turned out and a republic was established. 3) The republic was overthrown by a dictator and dictatorship became permanent under absolutist emperors who ruled through the long period of colonial empire. 4) Then for a while Rome became a theocracy, which lasted until 5) Rome and its diminishing empire fell to invaders and everything that had been Rome came to an end. Except that it never really ended – Rome is still there today, its modern freeways and downtown buildings surrounding Vatican City, headquarters of the surviving theocracy and denominational nuance of the religion called Christianity which originated not in Rome but further east in fairly backward colonial areas called Galilee, Samaria and Judea.

The place and phenomenon we call “Rome” began as did most other significant human groupings – a population cluster dominated by a succession of conquering strong men who imposed organization while extracting tribute along with valuable resources such as natural ores, manufactured products and wives.

As it happens, these particular strong men were Etruscans, natives of a rich agricultural region not far north of Rome and for several hundred years Europe’s most advanced civilization outside of Greece. The Etruscans were in fact much influenced by the Greeks, with whom they had lively commerce in trade goods, technology, art, ideas, and wives. The Etruscans adopted Greek writing, reshaped the letters and passed them on to their subjugated Romans who further modified them and passed them on to us (the characters you’re now reading originated in Etruscan times). So in those first Roman centuries the citizens of not-yet-mighty Rome were conquered subjects of the powerful Etruscan males who loved wine and good times and did their best to ensure immortality by interbreeding freely with both Greek and Roman maidens.

In 509 BCE the Romans rose against their Etruscan masters and threw them out, a decisive flexing of muscle that would in due course completely reverse their relationship. Two very common cultural evolutionary developments followed.

1) Government evolved.  They chose a republican form for their new government, no doubt in reaction to centuries of servitude under the Etruscans. “Republics” by definition are ruled by a few people who, having been elected by the defined citizens, are thought to represent all the defined citizens (and, through the defined citizens, all the other people). Even if they in fact don’t, they’re still thought to. So the citizens of Rome elected representatives they called “senators” to rule on their behalf – never mind that “citizens” were defined pretty much as restrictively as in old Athens, but it was democracy of a sort.

Let us therefore just note in passing that in Greek and Roman days the two terms “republic” and “democracy” had different and distinct meanings:  the former defined structure whereas the latter defined a method for staffing the structure. Today we in the western world use the words “republic” and “democracy” interchangeably, as if they were synonyms – but they do not mean the same thing, and they never did. Why do I mention this? Because – obviously – once one understands the true definitions, one is potentially enlightened enough to notice that it is quite possible to have a republic that is not at all democratic. The Union of Soviet Socialist Republics, for example.

As we move forward into this enquiry into mindsets let us keep ever in mind that government, which like everything else never stops evolving, can evolve away from democracy quite as easily as it evolves toward democracy. Perhaps easier, for non-democracy appeals to greed and self serving which are always amply present. Just remember this:  a “republic” is a particular form (design) of governmental structure; “democracy” is one way of staffing that structure. There are other ways of selecting staff to fill the offices of government, as tyrants have showed us through all history.

The Romans spelled out the design of their republic in a constitution. The senate then referred to this constitution as the basis for the laws it adopted (these matters were much studied by the American Founding Fathers). Laws passed mean nothing if they’re not implemented and enforced, so the Roman senate implemented a bureaucracy to make sure its laws got administered, its will enforced. Thenceforward, the Roman bureaucracy evolved to increasing size and complexity over time as do all organizations that administer things, inevitably, no matter whether they’re public (government agencies) or private (corporations). Notice here too the unknowingly sloppy but popular misuse of terms. People speak of administrative bureaucracies as if they were “the government” – but they are not, they are simply the tools that governments set up to implement the decisions made by those who govern. Those who govern, “representing” the people who voted to elect them, do so (usually) in the name of “all” the people. Therefore:  We The People are, ultimately, the government. See? Such simple things, so vastly mal-understood. One wishes they would teach civics in the schools once again.

The Roman Republic lasted 465 years, from 509 to 44 BCE when Julius Caesar took over. Many historians like to say it lasted another 18 years, until 27 BCE when Augustus Caesar declared himself emperor, but I declare that nonsense because eighteen years under a dictator’s arbitrary rule cannot sensibly be called a continuation of the republican representative government, inherently democratic, they had enjoyed until the obviously undemocratic Julius got out of control.

2) Colonialism evolved.  During the 465 years of the republic, Rome’s hegemony steadily expanded border by border until it directly controlled or dominated de facto every inch of land surrounding the Mediterranean Sea and then some. A popular mindset of this period was that it is normal and perfectly okay to steal your neighbor’s land by force if you can. This mindset yet lives in various parts of the modern world.

Using conquest, alliance, or subterfuge and betrayal, whatever worked, the Roman empire expanded from central Italy to the entire Italian peninsula (take that, Etruscans), then to North Africa, the Middle East and Balkans, plus most of Iberia and Gaul (Spain and France). After four centuries of this, the Romans were invading the British Isles and making trouble all up and down the long ill-defined border with the Germanic homelands in northern Europe. Along the way internal tensions and egos had produced a series of civil wars, one of which culminated in the ascent of a popular Roman general known as Gaius Julius.

The phrase “crossing the Rubicon” – meaning actions that pass a point of no return – refers specifically to the Roman general Gaius Julius commanding his troops to cross the shallow Rubicon River in northern Italy, headed south, towards Rome. To the senators in Rome in 49 BCE, this Rubicon crossing was seen as an act of treason, insurrection, a declaration of war against themselves, the senate. Julius’ contemptuous disloyalty and defiance thus crossed the tipping point of civil war, very much like the aristocracy of South Carolina in 1861. Over the next five years Gaius Julius engaged in numerous battles, defeated the defending loyalist general Pompey, and steadily consolidated his position and power. In February 44 BCE he named himself dictator for life, thus becoming Julius Caesar, and the democratic Roman republic died forever.

Casting these events in modern context, it would be as if Donald Trump declared martial law across the USA, helicoptered out to Andrews Air Force Base, placed himself at the head of a mile-long column of Abrams tanks which then roared back in to the U.S. Capitol building, set up a perimeter and, before cameras, Trump declared himself the First Emperor of America the Great and announced that all members of Congress are hereby fired. Such things happen with some repetitiveness in unstable nations across Africa and the Middle East, and have been known to occur in “more stable” places such as Moscow, Berlin and Beijing. The terminally narcissistic Benito Mussolini, for example, ever hopeful of returning Italy to the glorious Roman past he imagined and with himself in the role of Caesar, was inclined to that sort of leadership style when he wished to impress people and impose his way upon them at the same time.

Back in Rome, some sixty members of the now-defunct senate, not going quietly, conspired in a decision that the only way to solve this Caesar problem was to kill him. Thus it came to pass during the  44 BCE Ides of March, just a month into Julius Caesar’s announced rule as absolute despot, that he was assassinated by a group of senatorial notables who hoped to restore the democratic republic. In the battles which followed they were defeated, however, and the civil war waxed and waned another seventeen years until 27 BCE when the late Caesar’s adopted “son” Octavius, having prevailed militarily, appointed himself “Caesar Augustus” meaning “first emperor” and that was that.

A long line of Roman emperors followed over the next few centuries – eighty-six, in fact, from Octavius down through the final and fittingly-named Romulus Augustus. Few were well suited to conducting the job of dictator efficiently, so job turnover was fairly high, as was their mortality rate. Deaths in office were more the rule than the exception for Roman emperors, and few died of natural causes. A few typical examples convey the flavor:

Caligula (37-41 CE): Assassinated in a conspiracy of senators and Praetorian Guards.

There’s a whole lot more like this. Poison was sometimes used, but mostly it was the naked sharp-edged sword.