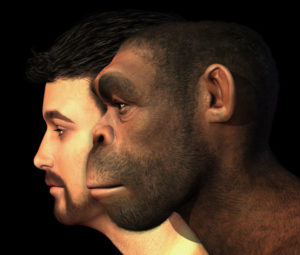 From a common ancestor, 85 million years ago

About 85 million years ago we primates and the other mammals had a common ancestor. The common ancestor was a mammal – it was not a primate because primates didn’t exist yet. Then, for some unknowable reason, one particular species of mammal got separated into two different groups. The two groups no longer had frequent contact. They no longer could interbreed with each other. Perhaps one group was on a peninsula that geologically separated and became an island, leaving their erstwhile relatives behind on the mainland. Or perhaps a great mountain range arose between them. Whatever – the two mammal groups became seriously separated. On their own then, each group continued to evolve on for a few million years, now in the two separate environments.

Over time the two environments changed. The island became hot and arid; the mainland turned into a tropical jungle. Each group survived by adapting to its changing environment. The mammals on the mainland adapted to the wet jungle; they took to the trees where they found plenty of tasty fruits and small creatures to eat. And so they had lots of babies, and over a few thousand generations there were quite many more of them. However, their relatives on the island grew fewer in number as the island became hotter and dryer. Fewer of their babies survived and more of the adults died young, because the nuts and seeds they all loved to eat became scarce as trees succumbed to the heat so there were fewer nuts and seeds available.

A lot of time went by. The mammal-primate pattern of evolution, which had been repeating itself millions of times since that very first complex life arose from a molecule, repeated again. And again. And thus the primates, which had originally been a single new group, became somehow separated into primate groups. Some of these newly separated groups became so changed from each other that they no longer looked alike, no longer could interbreed with each other. They had evolved into three different kinds of primates – tarsiers, prosimians and anthropoids. Just when these new speciations occurred is obscure and poorly understood, therefore their origins are guesstimated here on the usual scientific basis of reasonable interpretation and inference from random finds of ancient fossils dug up from the earth or exposed by coincidental erosion of the soil where they had lain buried since they died many millions of years ago. On these fossil findings, and the scientifically informed interpretations of them, I can assure you – experts differ.

From a common ancestor, 55 to 45 million years ago

Forget the tarsiers and prosimians, who cares, because it is from the more interesting anthropoidea that we ourselves are ascended. And so you will want to know it was somewhere between 55 and 45 million years ago that undisputed early anthropoids were surviving and reproducing in Africa and India. They were about the size of today’s small lemurs, and they were the smartest animals ever to appear on the face of the earth. So far. They also had the highest consciousness of any living creature then resident on the earth.

A lot more time went by. Evolution kept doing its quiet work, faithfully following the ancient pattern of diversification followed by self organization accompanied by ever-increasing complexity rising toward ever-higher levels of consciousness and intelligence, just as if it had been somehow ordained that nature should conduct itself in this manner, producing order out of chaos, and dividing old species into two or more new species. And so it happened again, in our personal line:  out of the anthropoids arose the monkeys and the hominoids.

From a common ancestor, 30 to 20 million years ago

From a common ancestor, 14 million years ago

Slowly approaching modern times, orangutans diverged from the hominoid line about 14 million years ago, separating on their own line from the African line of great apes.

From a common ancestor, 9-8 million years ago

In Africa, Gorillas branched off this line between nine and eight million years ago.

From a common ancestor, 7-5 million years ago

Then, from a common ape-like ancestor, somewhere around seven to five million years ago (scientific guesses actually range from thirteen to four million), the line that would become bonobos and chimpanzees split off to go its own way while the first human ancestors to walk on two legs soon appeared. Slightly later (5.5 million years ago) came genus Ardipithecus, a forest dwelling human ancestor retaining chimp- and gorilla-like traits. Chimps and bonobos remain our nearest living relatives on the phylogenetic tree.

The line from ancestral Ardipithecus continued on to become hominins (in), the human family – ourselves and our ape-like/human-like ancestors and sister species – just as from time immemorial, new species were born out of old species, became different, separated. Some branched into yet newer species, some lasting longer than others, but all these other species eventually experienced population declines and thinning until they eventually lost the critical mass essential for interbreeding and thus, inevitably, went extinct. All but one. In the entire hominin line only a single line survives – Homo sapiens. Us.

We Homo sapiens have not yet gone extinct, or lost any of our breeding capacity. In fact, we are going in quite the opposite direction – i.e., overpopulating the earth to such excess that our numbers are destroying the life-sustaining habitat of all (ALL) other land and ocean animals as well as many of the wild plants. This is the other way to go extinct.

From Australopithecus, 4.2 to 2.4 million years ago

Following our separation from the chimpanzee-bonobo line and after Ardipithecus, the earliest species recognized as true ancestors to us humans was the australopithecines. These pre-human ancestors, with both ape-like and proto-human features, arose around four million years ago and split into two branches, one robust, the other gracile (slender and graceful). Counterintuitively, the robust line (“paranthropus”) eventually died out, and one line of the slender branch evolved on to produce our genus Homo. Of these, the species best represented in the fossil record is Australopithecus afarensis;  the bones of more than a hundred individuals have been found between South Africa and Ethiopia, including the famous “Lucy” (3.2 million years ago).  Other notable australopithecine species identified to date include A. africanus, A. anamensis, A. garhi, A. bahrelghazali, A. deviremeda, A. boisei and A. sediba – all extinct.

Discovery of Homo habilis (“Handy Man”) at Tanzania’s Olduvai Gorge in 1959-60 was a major milestone in understanding human evolution. Clearly the oldest member of the new genius Homo, Homo habilis during its roughly 800,000-year lifespan nevertheless retained some ape-like features such as long arms and protruding facial muzzle (though protruding less than other hominids). By 2.5 million years ago hominids were using stone tools and scavenging for meat-rich diets – the extra energy from which may have contributed to evolving larger brains

With a larger brain than all predecessors, Homo erectus was the first human ancestor to practice a true hunter-gatherer lifestyle and the first to migrate out of Africa (to Asia) in large numbers. In the later part of this period we find some evidence of the use of fire as well as more complex manufactured stone tools.

That’s the last of human antecedents measured in millions of years past. After Homo erectus the approach to modern times quickens and the plot thickens. Around 600,000 years ago we find Homo Heidelbergensis living in Africa and Europe, and with brain capacity approaching that of modern humans. Archeological evidence shows that immediately-pre-modern human versions of the genus Homo were building purposeful wooden shelters in Japan by 500,0000 years ago and were hunting with spears by 400,000 years ago. They were skillfully shaping stone blades and grinding stones by 280,000 years ago. By 230,000 years ago Homo neanderthalensis was living across the breadth of Europe from Iran to Britain.

And so the stage is set. We have properly built up a super-brief history of the antecedents of modern humans, and we’re ready to graduate on into that marvelously interesting subject which is ourselves. …but wait…  Before moving on, there is one last detail that really must be mentioned if our Understanding is to increase as it should, along with our increasing Knowledge of bare facts. An open mindset is truly prerequisite here, because that one last detail is…

You may recall earlier mention that evolution appears to operate by random chance – that it does not proceed as a smooth, continuous straight line but involves many zigzags – now forward, then sideways …and sometimes backward. This is a well observed scientific fact:  while evolving “forward,” things can devolve downward as well as emerge upward.  Over the long run, “upward” undeniably has won out over “downward” – “undeniable” because we exist and are more complex than germs which are more complex than galaxies which are more complex than the chaos right after the big bang. Yes, things undeniably have progressed, risen higher – an overall winning strategy I choose to call the Godly Algorithm. But there’s no use pretending there weren’t setbacks along the way or expecting there won’t be more. (e.g., just look at the history of American elections).

With our minds open to this incontrovertible fact, we see that “smart humans” have finally emerged and we seem to have higher consciousness than, say, the less-smart naked molerats, which seem to have somewhat lower consciousness in clear evidence of which they simply cannot learn how to do calculus. As it happens, there is a splendid clearcut example of this, and it happened in fairly recent times. Worst of all, it happened in our own human line of ascent. It involved a human species that did not ascend – it descended. It devolved. Embarrassing, yes, but no church – none – has any doctrine whatsoever that is compelling enough to deny the facts about what really happened.

In 2003 archeologists working in Lang Bua cave on the remote Indonesian island of Flores discovered the fossil remains of a previously unknown species of modern human. The discovery was received as quite a shock, but fairly abundant evidence left no doubt that Homo floresiensis was a unique human species with a relatively large brain. And it stood about three and a half feet tall.

Inevitably nicknamed “hobbits” because of the small stature, Homo floresiensis lived well into early modern times before going extinct sometime between 17,000 and 12,000 years ago – shortly before we big humans invented agriculture. Analysis of hobbit remains, along with associated stone tools and sediments, indicates the species probably originated when it branched from another human line between about 95,000 and 75,000 years ago. Subsequent excavations on the Indonesian island of Sulawesi found stone tools dating back to around 120,000 years, attesting the presence of early modern humans in the area – possibly floresiensis, Homo erectus, Neanderthals and/or their close relatives the Denisovans – long before Homo sapiens arrived about 50,000 years ago. Scientists continue to differ on how floresiensis fits into the human evolutionary picture. Some recent arguments (among countless other arguments) favor it as an offshoot of Homo erectus, the first hominid with body proportions comparable to modern Homo sapiens.

The initial find, an adult female about thirty years old, include the skull, several limb bones, hand and foot bones and a partial pelvis. Subsequent discovery of at least eight other individuals’ skeletal remains, all diminutive in stature, indicates the small size is not an anomaly. The findings have great significance since so few hominin skeletons other than Neanderthals have ever been found. Moreover, remains of a dwarf elephant found nearby suggest Flores Island exemplifies what is called the “island rule” – i.e., over time, large species isolated on an island tend to grow smaller while small species tend to grow larger. And indeed the remains of a giant stork nearly six feet tall were found in the same cave as H. floresiensis. Some think the two may have hunted each other.