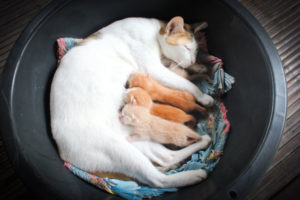 Mammals and dinosaurs both appeared on the earth about 200 million years ago, within ten million years of each other, but if they were competitors the dinosaurs clearly were winning the competition. When a six-mile-wide meteor struck Yucatan sixty-five million years ago, the dinosaurs were so dominantly established that the mammals around at the time – prime dinosaur cuisine – were not thriving and likely would not have endured. Yet they did, and are today the earth’s dominant animals. Once again the question arises:  If this huge meteor strike caused nearly-instant extinction of the dinosaurs and so much other life on the planet, how did land-dwelling mammals manage to survive, and thrive so soon thereafter?

Dinosaurs had been the apex predators for most of the 200 million years – quite a long while in the long-range scheme of things. For comparison, the oldest known member of our genus, homo habilis (the first bi-pedal primate) lived less than one million (a mere 900,000) years before going extinct. We ourselves, homo sapiens, have been around only a fleeting 200,000 years – one thousandth as long as the dinosaurs reigned. Many millions of years after the dinosaurs had disappeared, Homo habilis emerged out of the ancestral genus Australopithecus, lived its 900,000 years, and eventually died out somewhere between eight and thirteen million years ago – a figure on which experts differ with some heat as if it were politics (Bonaparte never crossed no damn Rockies!).

Mammals survived and thrived most likely because, at the time, so many lived in burrows and aquatic habitats that shielded them from the meteor strike’s intense heat and chaotic aftermath. The chaos reached around the world, but not everywhere as fiercely as in the western hemisphere where the strike occurred. There, for a thousand and more miles in all directions, temperature rise was so drastic the larger dinosaurs, wholly exposed, burned to death in an instant. Many mammals also perished outright – species you never heard of such as dryolestids, triconodontids, spalacotheroids and multituberculates – or were so reduced in diversity that their capacity to breed new generations was lost. But after days of terrible heat, surface temperatures dropping to bearable levels, many survivors emerged from their burrows, alive.

Though many found landscapes turned to barren wastelands, and though the tree of life was severely pruned back, mammals’ prospects were at once improved precisely because the predator/competitor dinosaurs were gone. With omnivorous dietary habits, they now found ample food sources including insects, aquatic plants, and other mammals, and regrowth of ordinary edible plant life of course began immediately. From that time mammals were destined to become the dominant land vertebrates and spread to almost every corner of the planet.

Generally speaking, a mammal is a warm-blooded vertebrate which has hair or fur, typically produces its young with live births, and has mammary glands which secrete nourishing milk wherewith to suckle newborns. They come in three types: placental mammals, marsupials, and the less well known monotremes. We shall take them in reverse order here so as to end up with the more interesting placentals, which include us.

1) Monotremes (duck-billed platypus and echidna). These mammals have hair, are warm blooded and secrete milk from mammary glands, but right there the resemblance ends. With bodies incorporating several bird/reptile-like features, these odd little creatures reproduce their young by laying eggs and incubating them. They are the least familiar of the mammals because their only natural habitats in are Australia and New Guinea. They also are less diverse – there are only five living monotremes: four species of spiny anteaters (“echidna”) and the slightly less obscure duck-billed platypus.

Regarded as “primitive” or at best “derived” because of their proclivity for laying eggs like birds and reptiles, monotremes are further suspect because they have oddly shaped snouts (“duck beaks”) and, as adults, no teeth. They “chew” food between the tongue and rough gums or a bony plate in the roof of the mouth. They have but a single nether opening which serves for both elimination and reproduction. However, like other mammals, they do have hair, three middle ear bones, a single bone in the lower jaw, a metabolic rate only slightly lower than other mammals, and they produce milk. But they have no nipples – mammals lacking mammary teats, the platypus secretes its milk onto its abdominal fur, the echidna into a temporary pouch where it is licked off the skin. Their offspring are born with instinctive knowledge of where to find the milk.

The monotremes are an excellent example of the unusual twists and turns natural evolution can take when living creatures are isolated from others for extended periods of time. Lacking a diversity of closely related species with which interbreeding that could produce new species might be possible, the monotremes have simply evolved ever more unique survival responses in their isolated environment.

2) Marsupials. Like other mammals, marsupials are covered with fur or hair. A distinct subset of mammalia, they are defined by their habit of birthing young which are incompletely developed by several months and must then be carried in a pouch on the mother’s belly where they are suckled and protected until reaching a survivable stage of development. Gestation begins in the female marsupial’s yolk-like placenta where the developing embryo uses the mother’s blood supply. Following the oddly abbreviated gestation, the newborn, essentially still an embryo, struggles from the birth canal to the nipples where its mouth securely latches on and it continues to mature for weeks or months depending on the species. Young kangaroos often continue nursing even when grown almost to the mother’s size.

Though marsupials today lack as many species as the placental mammals, they are quite diverse, ranging from small four-footed forms like the marsupial mole to the large two-legged kangaroos. Most of the 330-plus marsupial species are found in Australia and New Guinea where for millennia they, like the monotremes, have separately evolved into forms quite apart from the familiar mammal families of Africa, Eurasia and the Americas. These look-unlikes include things like kangaroos, wallabies, wombats, numbats, koalas, quolls, tasmanian devils, possums, bandicoots, marsupial moles and many more. Like placental mammals, the isolates of Australia and New Guinea have dramatically exhibited convergent evolution by evolving specialized forms to fill similar niches of similar environments in different parts of the world.  Bodily shapes adapted for grazing, burrowing, gliding and even long-snouted ant eating have evolved independently in the two groups. Until recent times Australia even had a wolf-like large predator called a thylocine. Now believed extinct (though this is not quite certain), a wild thylocine was last seen in Tasmania in the 1950s.

Only two marsupial types are native to the Americas – the opossums (Didelphimorphia) found in both North and South America, and “shrew opossums” (Paucituberculata) found only in south America. South American opossums currently come in sixty different varieties Although in the geologic past marsupials were more common than placental mammals in North America, there presently is but one – the Pogo-like so-called Virginia opossum (Didelphis virginiana) which is found all over the eastern U.S., not just in Virginia.

With a mouthful of alligator-like teeth which it brandishes wide open when threatened, Didelphis virginiana also has the entertaining custom of “playing possum” – keeling over and faking death as a last resort in hopes of diverting the interest of predators who might enjoy killing it as much as eating it. This tactic endures, so presumably it sometimes works. Of fairly little interest, the sloppy American custom of dropping the “o” when referring to “possums” is actually quite wrong because the animal officially called a “possum without a leading o” is actually the correct name for an Australian group of marsupials which are quite distinct from American Opossums.

Shrew opossums are outliers hardly worth mentioning since they don’t look, live or act like shrews and don’t look much like opossums either, which – technically – they’re not. Nobody really knows much or thinks much about them, though there is this: They all have odd lips and stomachs with three parts (kangaroo stomachs have only two parts); also, males have a corkscrew-shaped bifid (forked) penis, which female morphology is equipped to receive usefully, and the female shrew opossum has no pouch.

3) Placental mammals. Officially called “uetheria,” placental mammals include roughly four thousand species. A surprisingly large majority are rodents and bats, but placentals also include forms as diverse as elephants, walruses, muskrats and armadillos. As we well know, we humans are of the placental variety as are our familiar friends the dogs and cats and our farm and work animals such as horses, cattle, pigs, sheep and goats.

All placental mammals bear their young alive and fully formed. During gestation the new generation is nourished inside the placenta, a specialized organ which attaches to the mother’s uterus and endures until birth occurs. The eutherian placenta derives from the same membranes that surround reptile, bird and monotreme embryos inside those species’ eggs (the marsupial placenta is short lived and contributes far less to nutrition and development of the early-birthed marsupial young).

As you would expect, the experts who classify animals differ (disagree) in their views on what constitutes the best way to sort placental mammals. Accordingly several differing approaches can be found, and to the non-expert they all look pretty sensible in their own way. But even if you are expert in something – say brain surgery, or plumbing – unless you have college degrees in biology with specialization in placental mammalia you may not find it obvious as to which approach you should prefer when teaching your children about the different types of animals. Below, for example, is one taxonomy which will helpfully lend some notion of how the placentals fall out and in what proportions. As it happens, this list distinguishes eighteen types (“orders”) of placentals and advises on how many different species occur under each order. Human memories don’t well retain eighteen anythings, so don’t feel bad if you don’t remember these after reading them. They are sorted here in descending order by number of species in each group:

Primates will be addressed in a separate section below.

For your enjoyment, here is a sampling of these familiar friends:

Remembering the placental mammals would be a lot easier if there were a taxonomy with only six sensible categories instead of eighteen. As luck would have it, there is one and it looks like this: 1. Insect-eating mammals; 2. Flying mammals; 3. Rodents; 4. Aquatic mammals; 5. Hoofed mammals; 6. Meat-eating mammals. Re-sorting the eighteen categories above into these six is suggested for a quiet rainy afternoon pastime.