Chapter 29: The blessings of political and economic liberty to ourselves and our posterity

As one final example of how we can and do use the great power of our United States Federal Government, which is ourselves, to proactively advance our Constitution’s clear and unequivocal mandate to promote the general welfare while securing the blessings of universal political liberty and ensuring reasonable distribution of our common wealth for the economic good of ourselves, our children and their descendant posterity, all of us together, both now and in our collective future, and because environmental tipping points of major consequence have already passed by without our knowledge or notice…

…THERE IS HEREBY CREATED

The National Intergenerational Wealth And Security Trust Fund (NIWSTF) to assist all United States citizens to persevere and prevail through the unprecedented and severe disruptions and hardships caused by human-imposed solar heating of our earth environment over the coming century. The impending disruptions, though now scientific certainty, cannot be anticipated with detail as to their timing, their frequency, or how, where and with how much destructive intensity they will manifest.

In my view, we should be focusing on the overall net worth of the [United States], not just on the national debt.   The proper objective of fiscal policy should be a return to a situation where the state has a significant positive net worth.   Of course the reduction of the national debt would contribute to this end, but it is only one side of the equation.   The other side is the accumulation of state assets.   By holding capital and sharing in the fruits of technological developments, the state can use the resulting revenue to promote a less unequal society.   This is all the more important, given the…economic forces driving the distribution of income.   To the question, who owns the robots?  the answer should be that, in part, they belong to us all.

The National Intergenerational Wealth And Security Trust Fund shall be administered by a National Interest Investment Authority (NIIA) which is hereby created. The NIIA being dedicated to a long-range perspective shall be independent of the Cooperatives Bank of America with its more contemporary perspective. As a nationally-owned investment fund, the NIWSTF shall be administered in a context of simplicity understandable to all. Just as the personal budget of any individual person rich or poor must list income and then subtract bills to determine a remaining surplus if any, the NIWSTF shall list and quantify national assets and then subtract national debt and encumbered obligations to determine national net worth. Notwithstanding all the dyspeptic gas and angst suffered in some quarters over misperceived threat of national collapse posed by the very existence of national debt, the true net worth of our nation, to be revealed according to this Act, is breathtakingly ample beyond all conceivable doubt as is already well understood by thoughtfully cooler heads less subject to gas and angst.

Quantifiable national assets include and are by no means limited to examples such as:

The National debt and encumbered obligations, to be subtracted from national assets, cannot presently be accurately quantified because of this Act’s mandate for expeditious elimination of all national debt, for balanced budgets, and for transitioning of the United States economy to predominantly citizen-worker-owned cooperatives competing vigorously for up to five percent (5%) of market share within a unique and truly free trade environment unencumbered by monopolistic megalithic corporations which, having ever worked to stifle free trade and free competition, are abolished in toto by this Act. The Congress hereby directs that the National Interest Investment Authority (NIIA) shall, no later than three years after passage of this Act into law, commence annual computations whereby remaining national debt, if any, and encumbered entitlements and other obligations are subtracted from national assets to determine current national net worth. These annual computations shall be expeditiously reported in plain and understandable language to the American people via the news media, and to the Congress and the President, so that necessary adjustments may be initiated as needed toward a goal of building up national net worth and maintaining not less than one century’s (100 years’) worth of prospective economic security for the citizens of these United States.

National Policies, which by directive of this Congress shall be implemented by the NIIA, include and are not limited to:

Permitted and prohibited spending from the NIWSTF trust fund

Within strict limitation as provided in this Section, up to twenty percent (20%) of NIWSTF monies may be spent annually on any or all of the following five categories, which collectively shall be recognized as the nation’s determination to pass the American Dream on to each next generation.

No categories of programs other than these five shall be permitted financial support from the NIWSTF. No program of any nature shall ever be made wholly dependent on the NIWSTF, and a program started with use of NIWSTF funds shall maintain at least a fifty percent (50%) share of its funding from a non- NIWSTF source(s); this share shall increase not less than five percent (5%) yearly until the program stands independent of NIWSTF funds and no NIWSTF funds may ever again be spent on that program. No program expenditure or aggregate expenditure for multiple programs shall ever constitute more than twenty percent (20%) of the total funds in the NIWSTF.

Right.  So.  These ninety-five CaFMaC thingies… you gonna nail’em to the churchhouse door or what?

Precisely. Exactly what I’ve just been doing. Actually, any door will do. 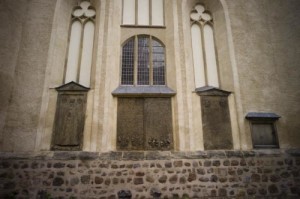