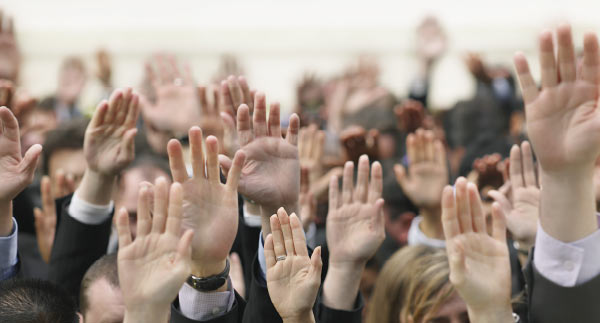 The “Great” Depression was over, its only greatness the vast numbers

of innocent bystanders its perpetrators had robbed and impoverished across America.

Slowly, with much greater fortitude and suffering, we climbed back up,

creating safeguards against the wrongs that had caused it, in the

never ending struggle against greed and power, and control over others.

We did it because we should.

The war was over. We won, because we knew

that Justice and Freedom and Truth and Right were with us

in the never ending struggle against greed and power, and control over others.

This too we did because we should.

Safeguards firmly in place against greed and power and control over others,

we prospered, and grew, and bought our own homes and sent our children to college

and traded for new cars and laid by for retirement and saved nest eggs. Life was good…

…for thirty-three years. An Age of Greatness enjoyed because we could.

Greed and lust for power slipped back in, unnoticed, riding a harebrained economic idea

guaranteed to restore inequality and control, ie:  If you deeply cut taxes on the richest few,

those rich will generously initiate new jobs, which will produce new goods and services,

vast new wealth will accrue to just everyone tra-la, generating more taxes than before,

and trickle right on down to the uppity middle classes, and to “those poor people,”

like spatter on a chicken house floor, oh my.  Such nutty supply-side gospel, but

Great Reagan and his minions believed.

Dancing and disunited, We voted passions while controllers pursued their one true goal:

Unlimited Wealth, and Power, and Control Over Others.

Impassioned – distracted – WE let our safeguards be frittered away.

Just forty years of Laffer-curve Friedman-Reagan supply-side Economics of Ruin, or how

to scuttle a Grand Five-Masted Ship of State and greatest idea in the history of the world.

The “Great” Subprime Mortgage collapse, worst since The “Great” Depression,

Our Age of Greatness truly dead and gone, its descendants the vast numbers

selling derivatives with lies – just because they could.

paced by deceptive new financial instruments, and lies. They are growing still,

selling, selling, the same bundled now-rental homes they foreclosed after 2008.

The long view:  up from slavery, serfdom…then trending back down again.

Will Americans never get it? Economics is politics’ evil twin.

A new reactionary dark night of America’s soul. Narcissus and His Minions

Lusting, lusting, with greed Greed, for power Power…and Control Over Others,

closed utterly of Mindset in blind Rightness, Right Worship of The Harebrained Idea,

…in aspiration of fellowship, that and that alone – to form a more perfect union unachieved.

We voted the dramatic turnarounds because we should, and by God we could.

Every progressive and her grandfather had become civically engaged, like never before.

ended, still complaining, in a landslide the likes of which had not been seen before.

Democracy reclaimed. As in those compassionate old New Deal years, We The People

then revolutionized our economic system, only more so, because finally we understood:

Political Freedom is meaningless unless you first have Economic Rights,

and a Living Income, and a Fair Share in the American Dream.