“Land is central to our spiritual beliefs because we believe that God dwells not only in and beyond the deep blue skies… but also in the thick forests, rivers, and beneath the earth.”  The forest is particularly important to the Masai because as their “promised land” it is the place that holds “our future, our prosperity, the resources for our cultural reproduction and the cohesiveness of our society,” says Olol Dapash. 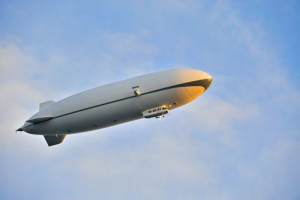 The dream begins with realization that I stand in the gondola of a dirigible moving through the air. From beginning to end, the dream seamlessly flows as understandings enter my mind in sequence. I am both “inside myself,” in the gondola, and “outside myself” observing everything including myself standing there. Two very different perspectives at once. They say this simultaneous dual viewing is not uncommon in some spiritual experiences. In the dream it feels perfectly normal, I don’t think about it.

It is some years after 2310, the second decade of the twenty-fourth century. Three hundred years in the future of my dreaming self. We are on a quite major journey.

We.  I am accompanied by other people, perhaps 15 or more. We seem to be all men. The gondola is large, accommodating us without crowding. We seem all to be standing, myself near the center. I am aware of being physically large and tall, which I take for granted, it seems normal – unlike my dreaming self who is neither large nor tall.

It is a beautiful sunny day under beautiful blue sky, cloudless but for distant cumulous approaching from southwest. Ground observation is excellent, for we travel a quarter mile high, and more – but never more than half a mile, someone says. Every altitude seems very high, never quite releasing us from acrophobic reminder that a large distance separates the ground from the thin floor beneath our feet. Windows all around – how normal the gondola’s high panoramic view seems. There is a feeling of wellbeing.

Down there the earth floats slowly past, an endless green scroll unrolling in front, slowly blending into the distance behind, a deceiver making us seem unmoving in the sky. Forest green seemingly unbroken to every horizon, few fields or roads apparent. Ample time to observe features and landmarks long before reaching them, long after they have passed.

Remembered from the rare previous times when I was so fortunate as to travel by air, this leisurely pace – quiet, peaceful – is customary for the great dirigible beneath which we hang as if by a miracle, riding thus to a far distant place. Yet it soon covers a lot of ground. We take for granted that this is how one travels, by air, if one needs to go a substantial distance, more than a horse ride. None who have done so disagree – these great dependable airships are a good and preferable option for long distance travel in a world long freed from the Old World’s dependence on poison oil. Popular lore recalls “the crude death,” curse of the ancients’ insane addiction. Such a thing can only be imagined, and only with difficulty, when such extravagance comes to mind at all.

Those who keep our history say two hundred years and perhaps more have passed since they burned poison oil, daily they did, transporting people and trade goods. Those old sources of oil were all drained, used up. Meager remnants now are rare commodities, extremely valuable – burning them as mere fuel would be unthinkably wasteful. We are taught as children that many types of carriers and many ways of powering them have been tried. Some remain in use for community travel, for special purposes beyond a community’s realm. The electric types of vehicles are nice, but then recharging them places such disproportionate demand on the supply of electricity, the supply being limited because there are so few of us. The economy of scale doesn’t work out right, they say.

For those relatively few whose life purposes require periodic long distance travel, nothing ever worked as well as dirigibles – economical, efficient, dependable. Beloved big old sausages. Long before I was born, dirigibles proved themselves the standard for journeying long distances by air. As indeed we are doing this moment, in the spacious, well appointed gondola securely slung beneath this mighty blunt-ended sky ship. We who sometimes must travel afar take its availability for granted, for why would we not?

Similarly taken for granted, an occasional village or town, the surrounding fields that sustain it often barely discernible as openings in the great forest below. Despite our excellent view, these are seldom obvious until the ship draws near. Roadways and trails connecting them are seldom obvious from this high up. Withal it feels normal, reassuring.

It seems unbelievable – the Old World, we are taught, had great sprawling metropoli – all now long gone like the old lizardy megasaurus – along with their multitudes who, our history keepers say, populated their centers, their outer edges, even out into and covering up the sustaining fields surrounding. People alive now, we know, are fewer indeed than in the Old World. Across the whole earth, they say, we number more than a hundred million, which seems a great many. Gone too are their great connectors, those old wide innerstaits on which they burned the oil. Even so, when encountered from above, their innerstait paths can still be traced as great lines where the forest looks different. Such exceptions are few, for all the world below is forest.

The reason for our travel does not arise. My dreaming mind knows simply that we travel southeastward, our present position passing over that old land still called Kentuckee as it has been called, like old Rome, for a thousand years and more. That more northerly land beyond the great river, from whence we embarked this morning, is old O’hio, like the river. Our ship will cruise in southeasterly direction until, by sometime tomorrow, it will carry us beyond Kentuckee’s eastern bounds to our destination in Apalasha, at an area called Wesvirginniya.

We know many places bear different names than those by which they were known long ago, but no one knows Old World boundaries any more – except for the rivers, so clearly dividing the forest. It doesn’t matter. Those old names held sway before the times of great troubles and the storms of death, of which we are told. No, these changes do not matter, for we have now the world we have. It is a good world. All this I just “know” – and the I who dreams takes it for granted, without questioning, for it is normal and good. 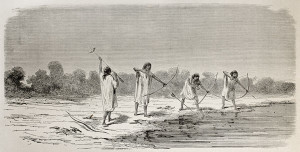 The forest comes to an end not so far from here, toward the westward sun, perhaps the whole of a hundred miles, and there the green gives way to blue. There lies the shore of our sea, our great sea bounded east and west by what was then – in that Old World – “middle America” as they called it. From Gulfamexeo, as called in those olden days, warm waters roll northward over the vast center of that America land and far across old Canada too, until there in the north they meet a great water called Hussonbay, warming the people there much as they warm us here. Our sea fills that old greatplain which once fed, they say, a mighty river Missippi. No more. Above drowned lands and immense old cities, they say, its waves lap peacefully, a thousand miles across in places. It is a calm, a beautiful sea.

It is called M’sippisea. It is a nice, a pleasant, water, toward which I feel very favorably disposed. In my dream I seem naturally to love these sea waters, they feel so very normal to me, like an at-home place I have known long and well. Sun shines sweetly there. I know, even as far away as our O’hio community lies distant from M’sippisea, its watery riches sustain us. That, and our verdant fields, so well mulched.

I recall nothing more, the dream ends and only its memory remains to wonder me.

And what wonders you? Heed well, gentle spirit, for the dream is autobiography and I somehow know you were among those with me there, in the gondola. Yes, I know.

Have you not dreamed it yourself also, yet? 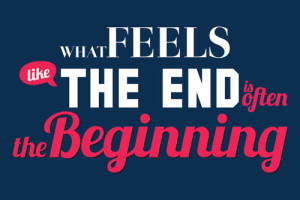 READERS MAY STILL ENTER THEIR THIRD-OPTION COMMENTS AND IDEAS.